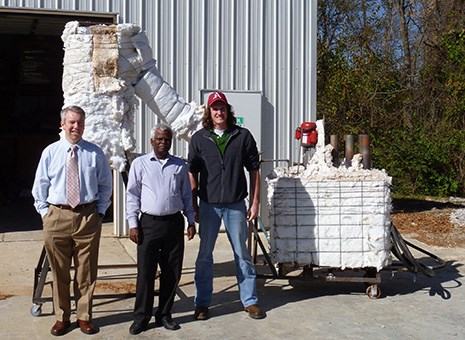 FAYETTEVILLE, Ark. – Engineering researchers at the University of Arkansas have developed a thermal energy storage system that will work as a viable alternative to current methods used for storing energy collected from solar panels. Incorporating the researchers’ design into the operation of a concentrated solar power plant will dramatically increase annual energy production while significantly decreasing production costs.

Current storage methods use molten salts, oils or beds of packed rock as media to conduct heat inside thermal energy storage tanks. Although these methods do not lose much of the energy collected by the panels, they are either expensive or cause damage to tanks. Specifically, the use of a packed rock, currently the most efficient and least expensive method, leads to thermal “ratcheting,” which is the stress caused to tank walls because of the expansion and contraction of storage tanks due to thermal cycling.

“The most efficient, conventional method of storing energy from solar collectors satisfies the U.S. Department of Energy’s goal for system efficiency,” said Panneer Selvam, professor of civil engineering. “But there are problems associated with this method. Filler material used in the conventional method stresses and degrades the walls of storage tanks. This creates inefficiencies that aren’t calculated and, more importantly, could lead to catastrophic rupture of a tank.”

As an alternative to conventional methods, Selvam and doctoral student Matt Strasser designed and tested a structured thermocline system that uses parallel concrete plates instead of packed rock inside a single storage tank. Thermocline systems are units – bodies of water, such as oceans and lakes, for example, but also smaller units that contain fluids or gas – with distinct boundaries separating layers that have different temperatures. The plates were made from a special mixture of concrete developed by Micah Hale, associate professor of civil engineering. The mixture has survived temperatures of up to 600 degrees Celsius, or 1,112 degrees Fahrenheit. The storage process takes heat, collected in solar panels, and then transfers the heat through steel pipes into the concrete, which absorbs the heat and stores it until it can be transferred to a generator.

Modeling results showed the concrete plates conducted heat with an efficiency of 93.9 percent, which is higher than the Department of Energy’s goal and only slightly less than the efficiency of the packed-bed method. Tests also confirmed that the concrete layers conducted heat without causing damage to materials used for storage. In addition, energy storage using the concrete method cost only $0.78 per kilowatt-hour, far below the Department of Energy’s goal of achieving thermal energy storage at a cost of $15 per kilowatt-hour.

“Our work demonstrates that concrete is comparable to the packed-bed thermocline system in terms of energy efficiency,” Selvam said. “But the real benefit of the concrete layers is that they do not cost a lot to produce compared to other media, and they have the unique ability to conduct and store heat without damaging tanks. This factor alone will increase production and decrease operating expenses for concentrated solar power plants.”

In 2008, Selvam, holder of the James T. Womble Professor of Computational Mechanics and Nanotechnology Modeling, received a $770,000 award from the U.S. Department of Energy to develop a novel method of storing thermal energy in concrete. The award and research project were part of the federal government’s initiative to develop technology for low-cost energy storage of solar power.