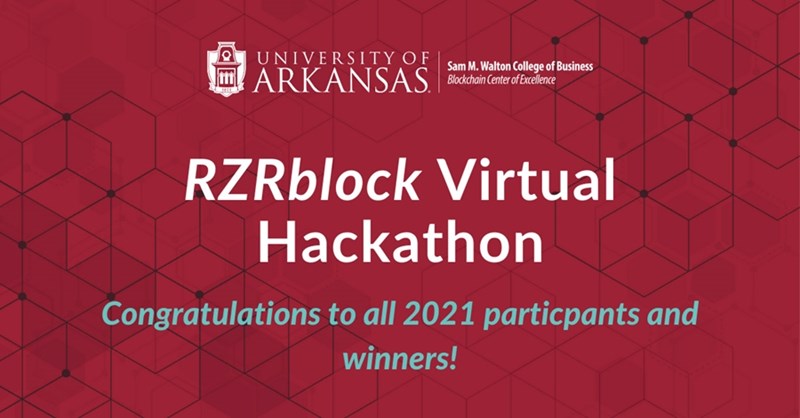 Team pitches from the 2021 RZRBlock Hackathon — including the winning efforts of Inoculus in the Open Track and Doge Dogs in the Student Track — are now available for everyone to view. Prizes for the top three teams in each track totaled more than $20,000.

The month-long RZRblock Hackathon is hosted annually by the Blockchain Center of Excellence, which was established in May 2018 within the Department of Information Systems in the Sam M. Walton College of Business at the University of Arkansas.

Video of the pitches and other events during the 2021 hackathon are available in the event playlist on the Walton College YouTube channel.

There were a total of 75 participants in the hackathon across 17 teams, with members of the winning teams coming from the United States, Canada, Europe and India.

Winners in the Open Track and Student Track were:

First place winners in each track received $5,000 and a five-month WeWork Labs membership.

The team placing second in the Student Track won $2,500 and a Ledger Nano S cryptocurrency wallet from Copied Code. Second place in the Open Track also won $2,500 plus Blockchain Foundations for the Internet of Value. The two third-place teams received $1,000 and a hackathon hoodie or t-shirt.

The month-long 2021 RZRblock Hackathon was a free, virtual competition open to students and professionals from the community.

Students and professionals were able to engage with industry professionals and build solutions for real world, blockchain-enabled use cases.

The 2021 RZRblock Hackathon received generous support from a number of event sponsors including:

The teams made video pitches based on use case scenarios submitted by participating companies. The companies and the use cases they submitted were:

Members of the other winning teams were: