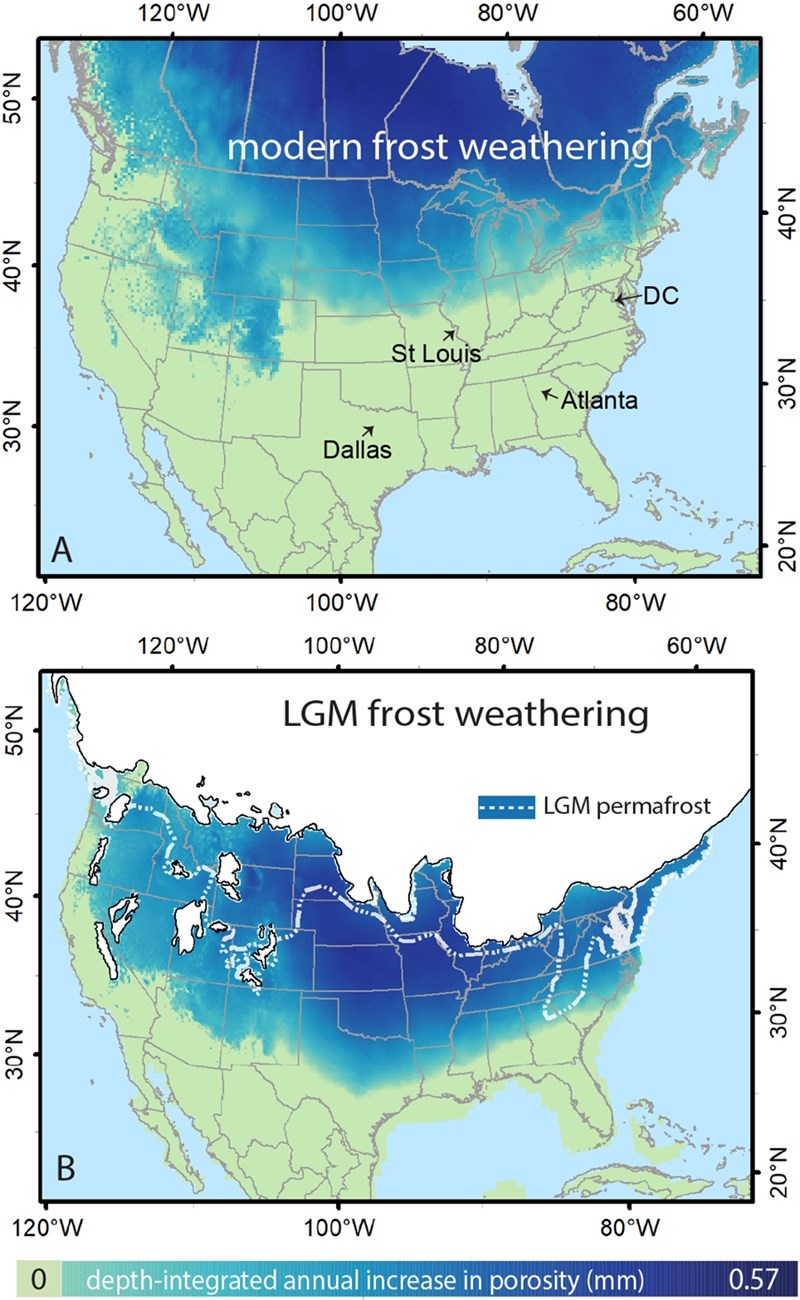 Extent and magnitude of frost weathering during modern times compared to approximately 21,000 years ago. Figure is slightly modified from Marshall et al., 2021 GRL

FAYETTEVILLE, Ark. – Cold temperatures, prevalent during glacial periods, had a significant impact on past and modern unglaciated landscapes across much of North America, according to a recent study by University of Arkansas geologist Jill A. Marshall.

Marshall, assistant professor of geosciences, is the first author of the study, published in the journal Geophysical Research Letters.

The findings help shape understanding of the earth’s “Critical Zone,” the relatively thin layer of the planet that extends from where vegetation meets the atmosphere to the lowermost extent of weathered bedrock. "Climate and ecosystems determine how quickly bedrock weathers, how soil is produced, how sediment moves on land and in rivers and other factors that shape the landscape,” the authors wrote.

In cold lands, such as Alaska today, frost can crack or weather rock that is at or near the surface of the earth – making it more porous and turning solid rock into sediment. By applying a frost-weathering model to North America paleoclimate simulations tracking temperatures during the Last Glacial Maximum approximately 21,000 years ago, Marshall and her team determined that a large swath of North America, from Oregon to Georgia and as far south as Texas and Arkansas, were likely affected by such periglacial processes.

While permafrost landscapes like the modern Arctic experience frozen ground for two years or more, periglacial landscapes, though not permanently frozen, experience below-freezing temperature for much of the year. Though the evidence of past periglacial processes is easily hidden by vegetation and/or erased by subsequent geological processes, the teams’ results suggest that frost weathering (and by extent other periglacial processes) covered an area about 3.5 times larger than the mapped extent of permafrost during the Last Glacial Maximum. This predicted influence of past cold climates on below ground weathering may significantly influence modern landscape attributes that we depend on such as soil thickness and water storage.

“Based on the widespread occurrence of glacial-period frost weathering over meter-scale depths, we suggest that past cold climates have had a significant impact on modern landscapes, both through lingering impact on subsurface pathways for water and thus chemical weathering, and the rock damage that contributes to the rate at which rock disaggregates into sediment and potential instability due to non-steady rates of hillslope and river processes,” the paper states.