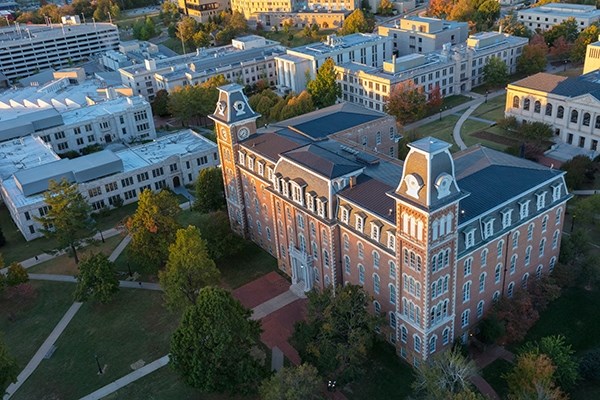 Chancellor Joe Steinmetz announced the formation of the new $1 million seed fund in the fall as a way to encourage interdisciplinary collaboration and spark creative activity in faculty-led initiatives in the humanities and performing arts.

"Providing seed funding to this incredible first batch of humanities and performing arts grant recipients will increase collaboration and innovation, help tackle pressing issues in creative ways, and enhance our research and discovery mission while providing support to our students, surrounding community, and beyond," Steinmetz said. "These projects are our guiding priorities in action."

A total of 39 projects were submitted for consideration — 20 in humanities and 19 in performing arts.

White and Hulen said the proposals in this first year were very competitive, and that many of the proposals that were not funded this year could be expanded to re-apply in the future.

"I want to thank Calvin and Jeannie for leading us through this process and making sure each committee represented multiple departments and perspectives from across the university," said Todd Shields, dean of Fulbright College. "We were especially pleased by the collaborative approach and big thinking represented in the proposals. Deciding on these nine initiatives was a tough call as there were so many amazing projects, but we are confident this first group of grantees will fulfill our goal of enhancing our university's discovery, innovation, creativity and scholarly work."

Proposals were evaluated on:

The nine projects that were awarded grants beginning spring 2020 include:

Through pioneering research and public programming, this project aims to put the U of A at the lead in addressing profound growth of Spanish-speaking populations in our community, state and nation.

In Arkansas alone, there are now more than 60,000 Hispanic students in public schools and more than 9,000 at higher education institutions. This project has the potential to make Arkansas a model in Spanish language teaching through a research program that will harness widely dispersed data in hopes of shaping policy and symposia with public school teachers, university faculty and community leaders.

By building a more multilingual citizenry and workforce through improved language training, colleges and universities can bind communities together and better prepare native English speakers for vigorous participation in a globalized economy and energetic engagement in an increasingly diverse world culture.

Currently, only 10 states include the Holocaust in their education curricula, but scholars have hypothesized that students exposed to it have a stronger commitment to civil liberties and are more likely to speak out in defense of them.

This project will draw on the work of an interdisciplinary group at the U of A and the University of Illinois at Chicago to evaluate and improve Holocaust education in American schools. They will conduct research into Holocaust education in the classroom and in museums to fully discern how Holocaust education benefits students' civic values, tolerance, empathy and sense of justice, and regularly present their findings through papers, conferences and policy briefs.

The plan to have Fayetteville designated as an International City of Refuge would bring global recognition to both the U of A and to the city of Fayetteville, which would become one of only 70 such cities around the globe and only two in the United States.

This ambitious project powerfully speaks to the intrinsic value of the humanities to work in the service of human life and to attend to larger issues of health and academic freedom.

The outcomes will be multiple: ICORN status would illuminate the work of a nationally ranked M.F.A. program in creative writing and translation (and, in the future, offer collaborations with the School of Art and Department of Music), enable scholarly work to be produced with global circulation, and create diverse teaching and learning opportunities while also opening up a myriad of possibilities for interagency partnerships, community collaborations and future grants.

This interdisciplinary collaboration between the Departments of Communication and Theatre proposes to create three short-form narrative films on the theme of "difficult conversations." Each film could stand alone, but also could operate in the context of a series.

These films would engage with difficult and timely conversations such as those involving sexual violence. The potential scope of this project not only involves students in media production processes, but also produces valuable and culturally relevant media content that could reach far beyond the classroom into the community, region and across the nation.

This collaboration is well conceptualized, feasible, timely, cost-efficient and at the forefront of the humanities field, and is likely to achieve future funding successes with the potential to significantly increase the profile of the U of A.

This wide-ranging, interdisciplinary project seeks to describe and combat obstacles to critical reasoning in an age in which consumers of information are bombarded with information overload, subjected to manipulation, isolated in "silos" and potentially bewildered by accusations of "fake news."

This project will emphasize the identification of rational, ethical and political norms for processing information under these crisis conditions and the development of realistic and practical strategies for implementing them. Immediate results will include a conference and a volume of conference proceedings; papers and at least one book from the investigators; and the development of new courses in vital areas including critical reasoning and data ethics.

This interdisciplinary project will feature a reinterpretation of classic literature through a diverse lens and manifest in a performance to be viewed by students across the state and potentially to be showcased nationally.

As part of the event, high school students from across the state will visit the U of A to attend the fully staged adaptation, participate in hands-on workshops, engage in discussions about literature and theatre performance and present their own 10-minute adaptations within the theme of the festival. Participating teachers will also be offered professional development credit.

The Experimental Performance Research Ensemble is an interdisciplinary collaboration between the Department of Music and the experimental media arts faculty in the School of Art intended to bring together practitioners from a wide array of backgrounds to foster pioneering research and development of experimental forms of performance with particular interest in the intersections between science, technology and perception.

Guided by a core team of researchers, the ensemble will develop a series of new creative works exploring digitally mediated performance methodologies, culminating in three public performances over the course of the two-year project. Each of the performances will be the result of a collection of improvisational research sessions, instrument development/exploration and compositional residencies featuring the core investigative team and guests.

This project aims to support the RefleXions music series, a festival of Latinx music that will promote greater understanding and embracing of Latin art and popular music and culture by using music as a bridge and a tool to connect and represent.

The RefleXions music series is a carefully considered program that is the U of A's next step to expanding its performing field to be more inclusive. This project's main goal is to embrace diverse repertoires and music from Latin-America and promote them by providing opportunities at the university and in our community to learn, grow, disseminate, change and teach.

This project will bring Latin-American music to the forefront of activities, while fostering collaborations between different departments, acting as a bridge to our local communities and promoting access and dialogue with our region's LatinX community.

This entrepreneurial, collaborative project will create a new internal unit, Razorback Music, that functions as a student-led 21st century record label, production and entertainment company, and digital music industry platform to bridge the gap between higher education and the music and entertainment industry.

Services will include recording projects, artist management, booking, music placement, merchandising, media campaigns and networking. These projects and services will be united digitally via a new virtual music industry portal that will be a revenue-generating technology and a music industry research unit. Through this enterprise, students will participate in every aspect of the music business.

Participating artists will include U of A students, faculty and alumni, as well as talented Arkansas artists from every genre. The label will also include experienced advisors in the music industry who will utilize their contacts and expertise to create industry connections for the label and attract outside investors.