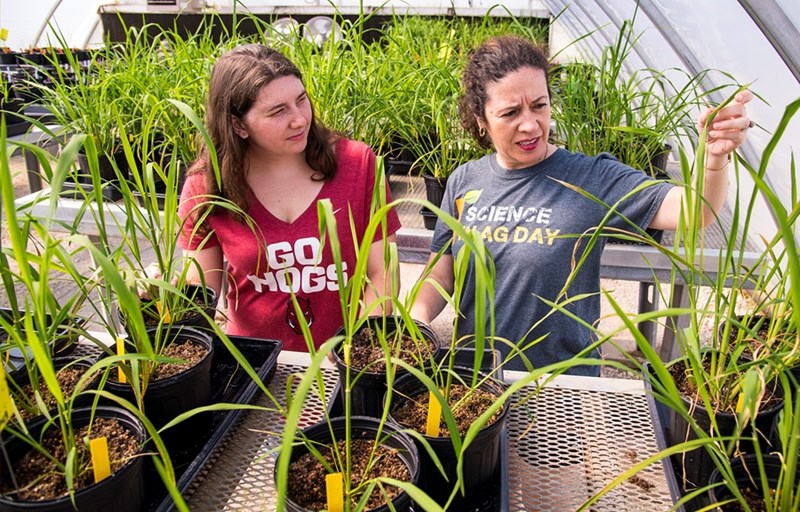 Clemencia Rojas, assistant professor of plant pathology at the U of A, received help from a student intern in researching methods of combatting the rice disease bacterial panicle blight.

The bacteria impacts Arkansas rice crops by causing grains and plantlets to rot.

Rojas, a faculty member of the Dale Bumpers College of Agricultural, Food and Life Science's Department of Entomology and Plant Pathology and scientist with the U of A System Division of Agriculture, has received funding from the Chancellor's Fund and the Arkansas Rice Research and Promotion Board to investigate the genetic basis of resistance to bacterial panicle blight and find antimicrobials to kill the pathogen.

For assistance with the research, she had help this summer from Amber Lancaster, a U of A Bumpers College senior majoring in horticulture, landscape and turf sciences, who was involved with the project in both greenhouse and lab settings.

Lancaster participated in the project as an Adair Scholar, which funds undergraduate student research internships during the summer. She worked on the project from the end of May until early August.

Lancaster was involved in screening rice cultivars to determine which may be resistant to bacterial panicle blight and also finding bacterial strains with properties that may kill the pathogen causing the disease.

"We were lucky to have Amber onboard," Rojas said. "She is a serious and dependable student who learned very quickly all the procedures required for her project. I am confident her contributions will be very valuable. Through her work this summer, we expect to identify rice cultivars with increased resistance to bacterial panicle blight and also identify sources of antimicrobials against the pathogen. I expect this research experience will also contribute to the development of Amber's future career."

The Department of Entomology and Plant Pathology offers the undergraduate endowed scholarship in honor of C. Roy Adair, a geneticist and plant breeder, whose accomplishments helped establish the preeminence of Arkansas rice. The first rice breeder to work in Arkansas, Adair and his wife, Ethel Owen Adair, left their entire estate of more than $1 million to scholarship funds at the U of A and Hendrix College in Conway.

The research internship is offered every year to junior and senior undergraduates at the U of A or other institutions with an interest in plant pathology. The application is available here.