FAYETTEVILLE, Ark. – University of Arkansas alumni Gerald B. Alley, his brother, Troy C. Alley Jr., and Rick Massey were recognized as Chancellor’s Medal recipients at the University of Arkansas Towers of Old Main event April 26. They were honored alongside more than 50 other benefactors whose cumulative giving or commitment to the university has reached or exceeded $100,000.

The evening featured student entertainment and presentations from a current student, recent graduate and professor and celebrated the transformational opportunities made possible through Campaign Arkansas, the university’s $1.25 billion capital campaign. 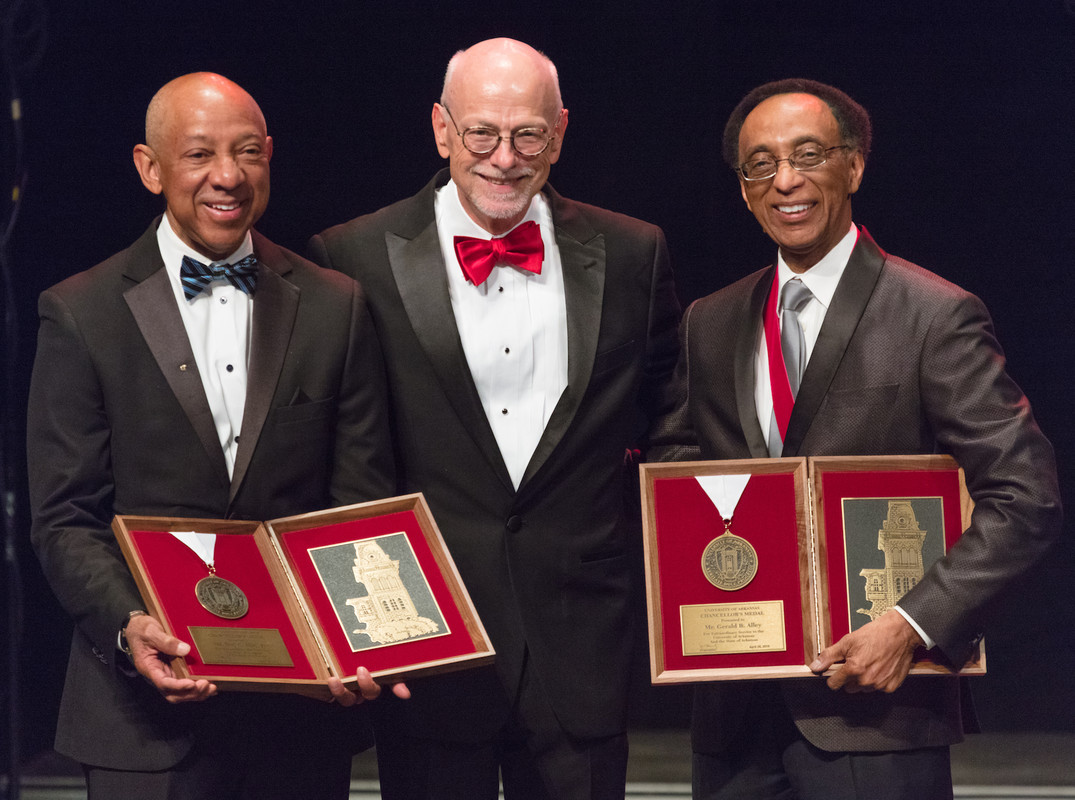 Gerald B. Alley of Arlington, Texas, was named a Chancellor’s Medal recipient because of his pioneering entrepreneurial spirit, volunteerism and dedication to higher education.

Originally from Pine Bluff, Alley enrolled in what is now the Sam M. Walton College of Business at the U of A at the age of 16 and majored in finance. He graduated in 1973 and was recruited by a major retail corporation for their Management Executive Training Program in Dallas. In 1974, he was accepted into and awarded a scholarship to the Graduate M.B.A. Program at Southern Methodist University.

Alley, together with his business partner and brother — Troy Alley — founded Con-Real in 1979. The company is the premier African-American-owned construction and real estate organization of its kind in the southern area of the United States.

Alley has served on various boards and steering committees at the university, including the Campaign Arkansas Steering Committee and Sam M. Walton College of Business Dean’s Executive Advisory Board. He is the co-founder of the Gerald and Candace Alley Family Foundation, which supports organizations that help with the educational needs of underprivileged students from kindergarten to higher education. He is also a major sponsor and supporter of the Alley Scholars, which has provided scholarships for more than 300 students in several states.

“Gerald’s parents founded one of the first black businesses in Pine Bluff, and he says they challenged him to obtain a quality education and become a steadfast entrepreneur,” said Chancellor Joe Steinmetz. “Through his work with the university, Gerald has done the same – by challenging and inspiring many more aspiring business professionals and entrepreneurs to achieve their dreams. He is a tremendous advocate of ours and a loyal volunteer and benefactor.”

In 2006, Alley was honored with the Silas Hunt Legacy Award at the University of Arkansas, as well as the Walton College’s Entrepreneur of the Year.

Troy C. Alley Jr. of Desoto, Texas, was honored with the Chancellor’s Medal for his philanthropic support of higher education and encouragement of diversity efforts in business, entrepreneurship and engineering.

Alley grew up in Pine Bluff, where his parents owned the Alley ESSO Service Station. He was encouraged to study engineering at the University of Arkansas by his mother, Gladys.

When he arrived on campus in 1965, Alley says, he initially felt overwhelmed by his new surroundings and the challenging classes, but he quickly learned that by making connections with people – talking to his professors and asking for help when he needed it – he could succeed in his classes. After graduating from the College of Engineering in 1969, Alley took a job with a defense contractor in Maryland, designing radar and sonar systems for the U.S. Navy and Air Force. He then became interested in sales and real estate and earned a master’s degree in real estate and finance from Southern Methodist University.

In 1979, Alley joined his brother, Gerald, in the formation of Con-Real, where he is the executive vice president and chief operating officer.

Alley and his wife, Unnice, were instrumental in the development of the Alley Scholars, which was founded in 2010 and is supported by the Troy and Unnice Alley Foundation and other organizations. A key component of the Alley Scholars is their program to develop the best and brightest minority students into business and engineering leaders. In 2018, the program was honored with the Diversity Champion Award at the university’s Silas Hunt Legacy Awards Celebration.

“Troy has utilized his business acumen and pioneering spirit to encourage many aspiring entrepreneurs through the Alley Scholars,” Steinmetz said. “He has also been an advocate for the university’s diversity and inclusion efforts. The Engineering Career Awareness Program is incredibly successful at recruiting underrepresented students to the field of engineering and helps them feel supported, confident and ready to succeed. The Alley family’s shared belief in the power of education comes through in their involvement and dedication to the university’s students.” 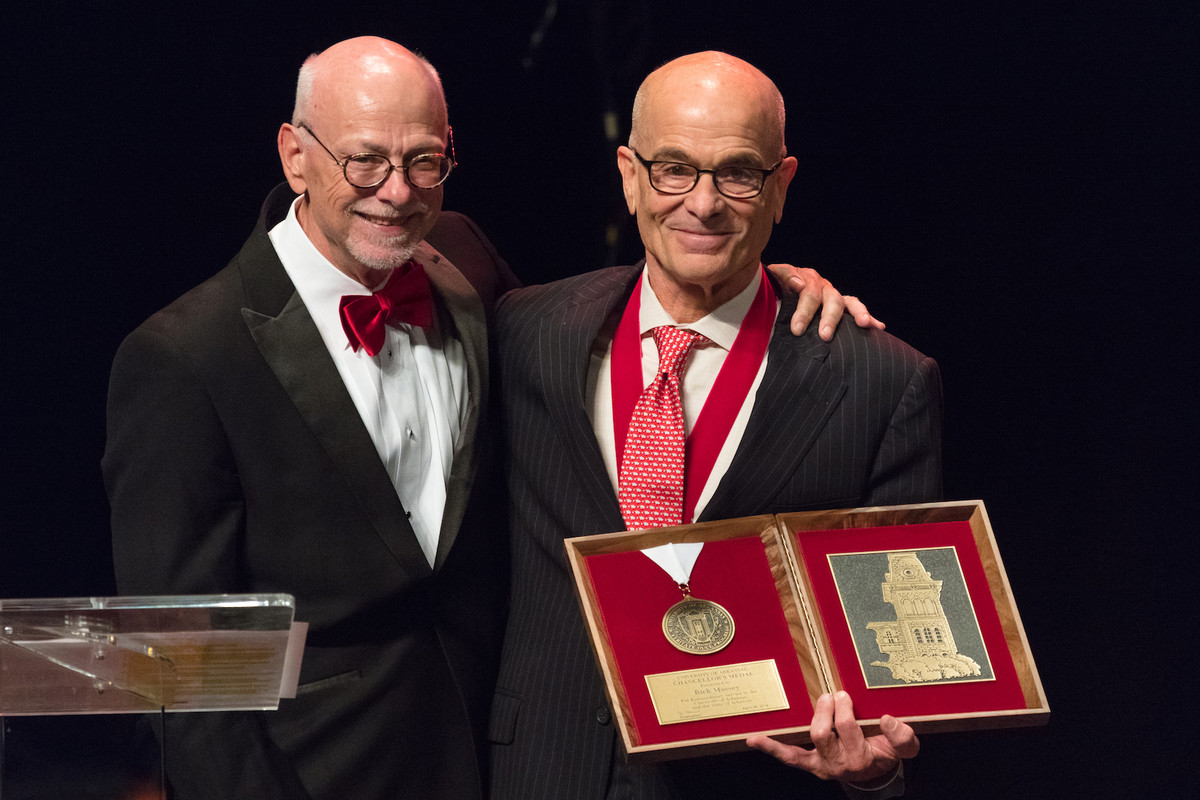 Massey joined the Rose Law Firm in Little Rock in the mid-1980s. At that time, the firm had one of the largest corporate practices in the south, representing dozens of public companies. Throughout his career, Massey worked with many legendary Arkansas capitalists, and this exposure influenced him to become an investor.

Massey founded and was the largest shareholder of Bear State Bank and led the bank through recapitalization and several mergers. The bank was sold in 2018 in the largest transaction between two Arkansas banks in the state’s history.

Massey is an investor in five large companies and serves on their boards of directors. He is also the chair of the Oxford American literary project, a national magazine and award-winning publication focused on great southern writing.

In 2017, the Massey Family Charitable Foundation made a commitment to the Advance Arkansas scholarship initiative, which supports new, returning and transfer students from Arkansas who exhibit some financial need and have records of academic success and civil engagement or community leadership.

The Massey family is also supportive of the Razorback Foundation, which benefits hundreds of U of A student athletes every year.

“Rick is passionate about helping students,” Steinmetz said. “He is a champion of our Advance Arkansas initiative and cares a great deal about student success. We have had many great conversations about retention, graduation and helping students from Arkansas. He and his family are generous supporters of the university and really care about making a difference through their philanthropy.”