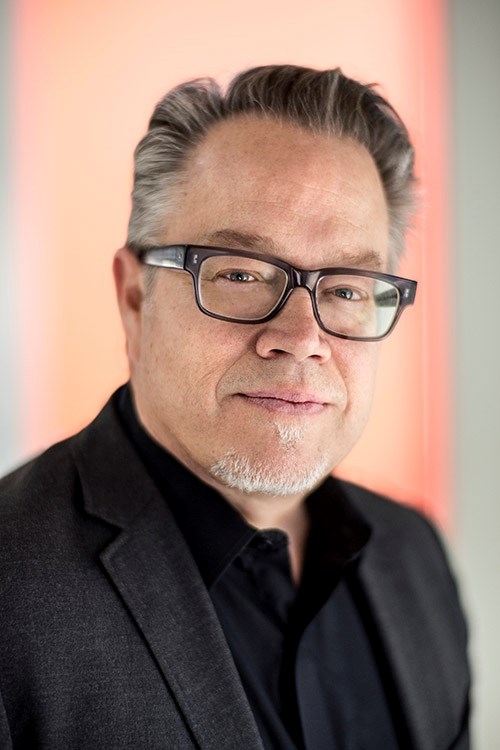 Marlon Blackwell, Distinguished Professor and E. Fay Jones Chair in Architecture, has been elected to the National Academy of Design and selected as a Resident Fellow by the American Academy in Rome.

FAYETTEVILLE, Ark. – Marlon Blackwell, a professor in the Fay Jones School of Architecture and Design, has been recognized with two distinguished architecture and design honors, and his design firm has been selected among the top 50 in the United States for 2018 by Architect magazine.

He has been elected to the National Academy of Design and will be inducted today at a ceremony in New York, and he has been selected as a Resident Fellow by the American Academy in Rome for spring 2019.

Blackwell is a Distinguished Professor and holds the E. Fay Jones Chair in Architecture in the Fay Jones School at the University of Arkansas.

The National Academy of Design, which was established in 1825 as the New York Drawing Association, continues to promote the fine arts in America through exhibition and education. This lifetime honor connects recipients to a lineage of more than 2,300 of the leading artists and architects who have influenced American culture over the past 200 years.

National Academicians are professional artists and architects who are elected to membership by their peers annually. They represent some of the most distinguished practitioners in their respective fields, with architects that include Frank Lloyd Wright, Frank Gehry and Renzo Piano, and artists that include Marina Abramovic, Winslow Homer, Cindy Sherman, Maya Lin, Louise Bourgeois and Robert Rauschenberg.

Each year, the director of the American Academy in Rome invites distinguished artists and scholars from around the world to reside at the Academy for periods generally ranging from one to three months. During their stay, residents serve as senior advisors to Rome Prize recipients and to other members of the Academy community. As part of his fellowship, Blackwell will also present a lecture.

Two late Fayetteville architects and faculty previously were also selected as fellows — James Lambeth in 1979 and Fay Jones in 1981.

Blackwell joins 15 others at the American Academy in Rome focused on history, art, photography, archaeology and other areas, who are spending various residencies this fall, spring and into next summer.

In addition, Architect magazine has listed his Fayetteville-based design firm, Marlon Blackwell Architects, among the top 50 all-around design practices in the nation for 2018 in its annual survey. The firm, which was founded in 2000, was ranked 50th overall in the "Architect 50." The ranking is a composite assessment of the firm's accomplishments in business, sustainability and design; the firm ranked fifth in design.

Architect magazine is the official publication of The American Institute of Architects. This is the 10th year the magazine has published the survey of top firms, based on their success in the previous year. The survey results will be featured in the magazine's November issue.

"These accomplishments for Marlon Blackwell and for his practice represent an apogee for his work in the public domain — well beyond Fayetteville and Arkansas," said Dean Peter MacKeith. "At the same time, these honors are a reflection of his long and equally distinguished work as an educator in architecture and design in the Fay Jones School.

"We are extremely proud and also privileged by Professor Blackwell's engagement with the school and the university, and congratulate him on these deserved recognitions. Our students benefit immensely from his design leadership and commitment," MacKeith said.