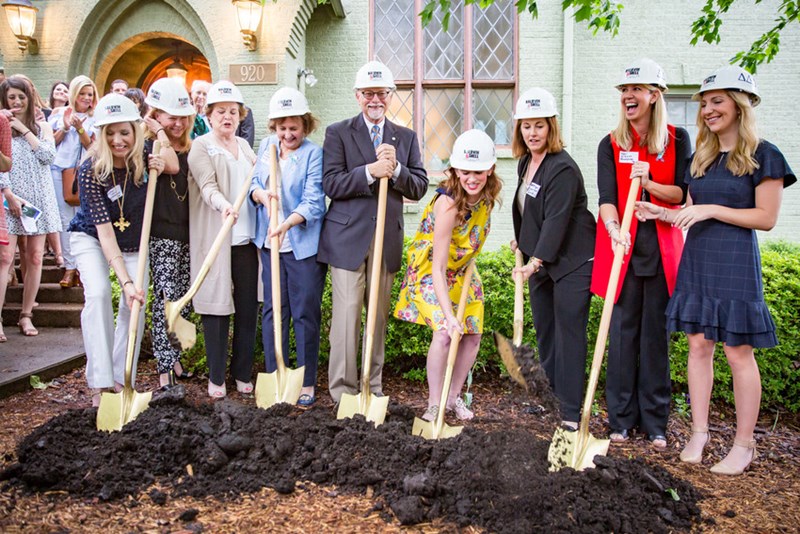 FAYETTEVILLE, Ark. – The University of Arkansas Delta Iota chapter of Delta Delta Delta held a house renovation and expansion groundbreaking on April 29 at their iconic house at 920 W. Maple St.

“This will be the first major renovation for the Tri Delta house in 50 years,” said Chancellor Steinmetz. “And it’s a clear statement by the Delta Iota chapter that the bonds they share are important, meaningful and worth preserving for future generations.”

Tri Delta was founded nationally in 1888 and established at the University of Arkansas in 1913 as the fourth sorority on campus. The chapter now includes over 400 members and is the second largest Tri Delta chapter in the country. In 2013, a centennial marker was dedicated at the Delta Iota house.

“We are thrilled to expand our Chapter House to accommodate our membership over the next 100 years,” said Griffin. “Our home will have ample community space for out-of-house members, state-of-the-art technology, infrastructure and security and will be energy efficient.”

Delta Iota was awarded the Award of Excellence in 2014 and 2015 and Most Philanthropic Chapter from 2012-2015 by the Order of Omega. In spring 2015, the chapter held the highest Panhellenic GPA, and in 2016 they earned the highest grades of all Tri Delta chapters. They consistently rank in the top five of all Tri Delta chapters for the most money raised for St. Jude Children’s Research Hospital, their chosen philanthropy, and contributed nearly $1 million to the organization over the last five years.

The Delta Iota chapter house was completed in 1932, and additions to the house were made in 1954 and 1965. The newest expansion and renovation will bring the house to approximately 43,000 square feet and will cost about $14 million. At completion, the house will hold 98 beds and consist of three floors and a walk-out basement.