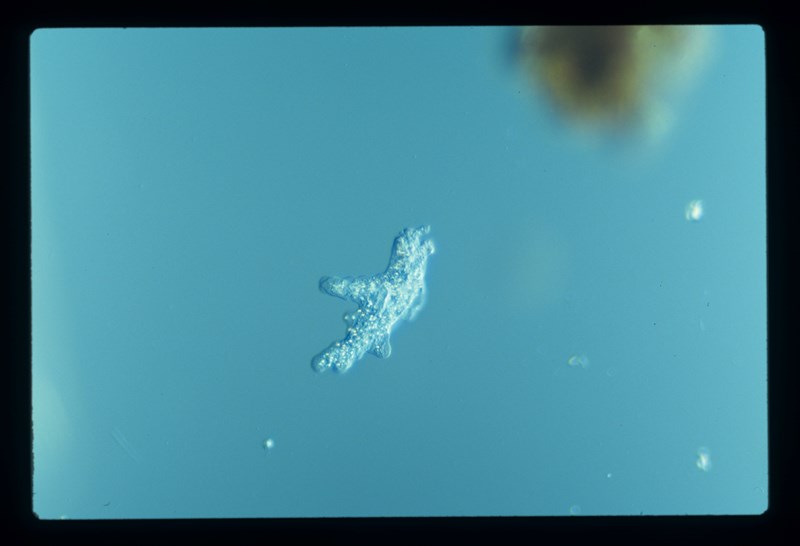 Amoeba proteus is the archetypal amoeba after which the group Amoebozoa was named. It lives in water and eats other protozoa and some bacteria.

FAYETTEVILLE, Ark. – Fred Spiegel is an advocate for the unseen, a champion of an under-examined world of biology that exists outside of animals, plants and pathogenic microorganisms.

“Amoebae are often considered no more than flexible blobs of cytoplasm,” said Spiegel, a professor of biological sciences at the University of Arkansas. “They are single-celled organisms when they are crawling around and actively feeding. To most people, they look like blobs. But they are subtle and display a wide range of structural diversity once you know what you are looking for.”

Mississippi State University, as part of a National Science Foundation-funded project, recently awarded Spiegel a grant for $141,335 to study cell structures and development for certain species of amoebae that represent the range of their diversity.

The overall project seeks to better understand the biology, taxonomy and evolution of amoeboid, single-celled organisms in the group formally known as Amoebozoa, the major group of protists that are the focus of the study. Matthew Brown, an assistant professor at Mississippi State and one of Spiegel’s former students at the U of A, is the principal investigator on the NSF grant.

A detailed understanding of how amoebae are related to each other and how each species changes through its life cycle will provide useful biological information, Spiegel said.

“We’ll be extracting messenger RNA from cells to see what proteins are being expressed during the life cycles of various amoebae,” Spiegel said. “From that we can get a good idea of the genome of the organism. We’re trying to figure out the characteristics that were present in the last common ancestor of all the amoebozoans. And from that, once we have a phylogenetic tree, we can hypothesize several things, such as how different shapes of the amoebae occurred, whether there was sex in the life cycle and which ones don’t have sex and why they don’t have sex.”

Sex in amoebae involves the same basic genetic mechanisms that are involved in processes like sperm and egg production and fertilization in the more familiar animals and plants, Spiegel said. However, the ways they package these genetics into particular cells often looks quite different than what we are familiar with. One of the goals of this project is to find out how different amoeboid cells are involved in sexual processes.

On July 30, the Mycological Society of America awarded Spiegel with its William H. Weston Award for Excellence in Teaching. The award, presented at the society’s annual meeting in Edmonton in Alberta, Canada, was based on nominations from his former students.