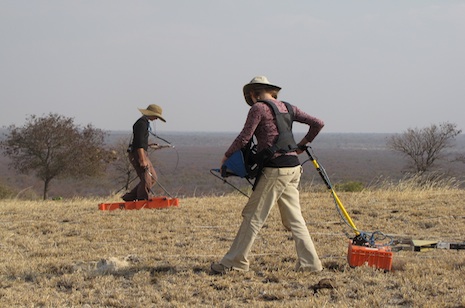 Katie Simon (left) of the Center for Advanced Spatial Technologies at the University of Arkansas and Eileen Ernenwein of East Tennessee State University conduct a geophysical survey on an archaeological site in Botswana. Photo by Carla Klehm, Washington University in St. Louis

FAYETTEVILLE, Ark. – A new program at the University of Arkansas is acting as a national hub for geospatial research and addressing a critical need in archaeology research.

The Center for Advanced Spatial Technologies and Archaeo-Imaging Laboratory launched the program, SPatial Archaeometry Research Collaborations, known by the acronym SPARC, last fall as the result of a $250,000 grant from the National Science Foundation.

The program promotes the use of 3D measurement, geospatial analysis and remote sensing technologies in archaeological research projects around the world, according to Executive Director Rachel Opitz.

“The capability of geospatial technologies to enhance the discovery and interpretation of archaeological remains, from miniature ceramics to mile-long monuments, is not only in offering new data, but creating an entirely novel means of engaging with the archaeological record,” she said. “For example, subsurface geophysical investigations allow buried archaeological remains to be documented, revealing complete and detailed plans of entire communities, offering new insights into community organization and past built environments without putting a shovel in the ground.”

SPARC will help researchers learn about spatial archaeometry, which measures properties of archaeological materials at all scales, including objects, sites and landscapes. The spatial properties of the measurements are central to their analysis and interpretation.

The program will assist researchers through every step of the research process: collaboration of proposal-writing, applying plans through research support awards, and sharing results and experiences with the archaeological community, Opitz said.

“The National Science Foundation has given us an opportunity to establish a national center for this type of archeology,” she said. “The growing availability and sophistication of digital technologies, particularly in the geospatial domain, has begun to profoundly affect how archaeologists and other scholars work.”

The first group of SPARC awards, announced on Feb. 15, reflects the three primary categories of direct support through the program: fieldwork, data and analytics, and publication.

“The projects involve researchers from many institutions across the United States who are investigating archeological sites around the world,” Opitz said.

One project involves a team of researchers at Washington University in St. Louis and East Tennessee State University, who will use a SPARC award to generate geophysical and aerial remote sensing surveys in three sites in Botswana, Africa. In another, scientists at Washington State University will generate baseline architectural data for an ancient village in southwestern British Columbia, Canada, which will be used to investigate household organization and population size.

A full list and complete descriptions of the recent awards can be found at the SPARC website.

CAST, established in the J. William Fulbright College of Arts and Sciences at the U of A in 1991, is dedicated to research and applications in geospatial analysis and modeling, remote sensing and digital photogrammetry. Photogrammetry is the science of recording, measuring and interpreting photographic images, among other things. Remote sensing is the measurement or acquisition of information about an object or scene by a satellite, radar or aerial photography.

The center specializes in serving the academic community through its emphasis on high quality university courses in geographic information systems, global positioning systems, and related technologies.