Support Razorback Basketball and Volleyball as Part of Hogwild Band 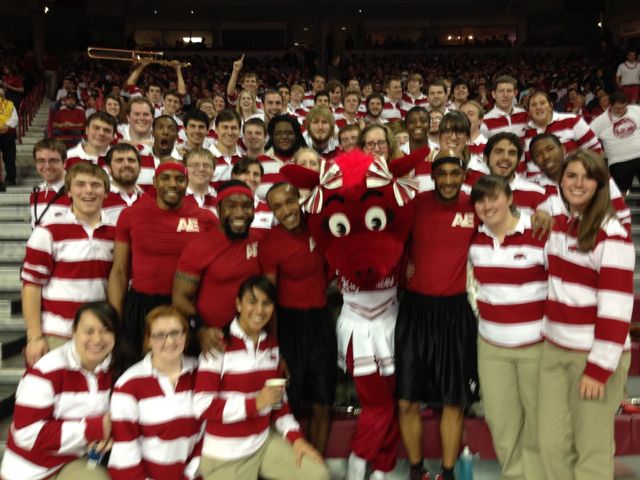 The Hogwild Band with the Air Elite Dunkers and Sue E. during the 2012-13 season.

FAYETTEVILLE, Ark. – The Hogwild Band will host an informational and organizational meeting for interested students at 6:30 p.m. Monday, Sept. 9, at the Lewis E. Epley Jr. Band Building. Membership is open to any student who is enrolled in classes at the university, plays an instrument and wants to energize razorback fans and players.

"The Hogwild Band is another way that the bands program supports our student athletes," said Jamal Duncan, assistant professor of music in the J. William Fulbright College of Arts and Sciences. "Members of the Hogwild Band are a crucial part of the game day atmosphere at Barnhill and Bud Walton Arenas. Supporting our teams and entertaining fans through music and spirit is our primary goal."

The 2013-14 season marks the debut of Duncan as director of the Hogwild Band. In addition to coordination and planning, the meeting will also include the band's first rehearsal of the season.

The nationally-recognized Hogwild Band is one of the premier athletic bands in the country and supports the Razorbacks in volleyball, men's and women's basketball and tournament play. The band has grown to include 120 of the university's most dedicated and enthusiastic student musicians.