Archeologists Return to Syria to Uncover Secrets of Ancient Settlements 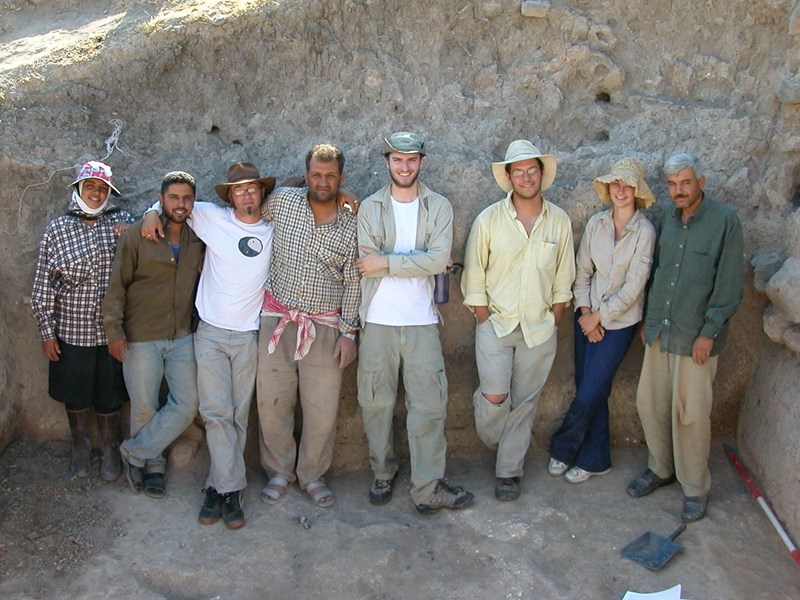 The 2005 Arkansas team with some of the local workers at Tell Qarqur. Jesse Casana is third from the right.

FAYETTEVILLE, Ark. — For a time in 2003, it looked like archeological exploration in the Middle East might come to a halt, leaving thousands of years of history buried. In the past year, University of Arkansas assistant professor Jesse Casana has successfully resumed excavation in a little-studied area in northwestern Syria, and is uncovering a rich record of human settlement.

What Casana and his team learn about the formation of Tell Qarqur could serve as a model for understanding the formation of “tells,” the ancient mounds that are common in the Orontes River Valley where Qarqur is located and throughout the Middle East. That knowledge could be an important link to understanding the organization of human settlements in the ancient world.

“The entire Orontes River Valley is extremely interesting and largely unexplored,” Casana said. “We’ve seen remains of very early sites that date to the threshold of agriculture for the entire world, ten- to twenty-thousand years ago.”

He calls the sites in the valley and bordering mountains phenomenal: “We’ve documented Neolithic sites, previously unknown Crusader period castles and everything in between.”

Archeology has come a long way from the freewheeling, Indiana Jones style of grabbing big shiny artifacts for museum collections. In the past decade, Casana notes, the profession has become more scientific. Today’s archeologists combine the detail work of the traditional organized dig with big-picture information available from satellite images to produce new answers, in Casana’s case, about some of the oldest continuously occupied settlements in the world.

Casana explained that the use of satellite photos has “revolutionized” the way archeologists work, particularly in the Middle East. The release of Cold War-era spy satellite imagery during the Clinton administration made it possible to see the landscape of northwestern Syria and bordering Turkey as it was in the 1950s to 1970s before plows and irrigation systems obliterated large parts of the archeological record. To increase the usefulness of the satellite images in the field, they have been converted to digital images that allow archeologists to identify global positioning system coordinates. Evidence suggests that the large double mounds making up Tell Qarqur were occupied in the Iron Age and early Bronze Age. The site was first excavated in the 1980s, and for a decade, the American Schools of Oriental Research (ASOR), led by noted archeologist Rudolph Dornemann, directed the excavations. After Dornemann’s retirement, Casana assumed leadership of the project in 2004 in cooperation with ASOR.

“This project is one of the richest archeologically speaking because the area has the longest history of sedentary occupation anywhere in the world,” Casana said.

Casana’s research interests focus on the way that the settlement systems were organized during the Bronze and Iron Ages and later in the Hellenistic through late Roman periods. At Tell Qarqur, he is working with a location that was continuously occupied for about 10,000 years, from the Neolithic through the medieval period.

During the summer 2005 excavations, Casana and a team of graduate and undergraduate students sought to reveal the formation of the tell through the ages and to develop a digital map of the site. In general, tells form gradually in a place where people live in mud brick houses and build on top of the remains of fallen structures.

Tell Qarqur is an unusual formation of two tells, and the satellite imagery suggested other settlement in the area. From the satellite photos, it was possible to see an area much like a halo of disturbed ground around the tells. Digging in the halo area revealed a Neolithic settlement about 100 feet from the north tell.

Using satellite imagery allows Casana to see the tell in relation to other features of the surrounding landscape. Thanks to the work of Jack Cothren, assistant professor in geology, Casana has been able to convert the satellite images to three-dimensional images. In 3-D, it is possible to see subtle changes in the land that would not be observable from ground level or by conventional satellite imagery. For example, slightly raised areas - probably created by up-cast earth from digging or by levees - outline the ancient canal systems that flowed through the valley.

In the coming summer, Casana plans to return to Qarqur with a team of outstanding graduate students and “a suite of technologies.” Working with anthropology professor Ken Kvamme and others from the UA Center for Advanced Spatial Technologies, he plans to adapt several ground-penetrating technologies to the needs of archeology. His goal is to learn as much as possible about what sits under the ground without beginning the expensive and destructive process of digging.