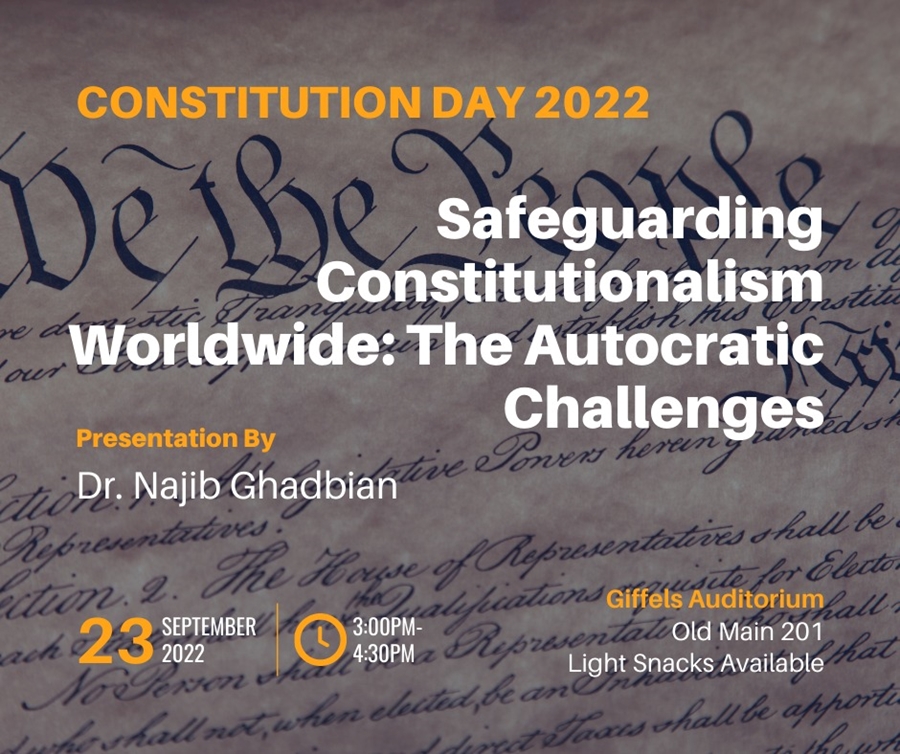 Ghadbian will focus on three challenges to constitutionalism: the rise of populism, the spread of autocracy and the difficulty in drafting constitutions in democratizing countries.

Ghadbian says of the lecture: "Constitutions codify the social and political contract between society and the state. They set the parameters for the political structure. They provide rights to citizens and protect individuals from the state. Constitutionalism refers to the way constitutions define the rule of law and limit exercises of power. Today we are witnessing broad attacks on constitutionalism throughout the world. In my presentation, I will address three types of challenges to constitutionalism.

"First — the populist challenge. Populist leaders exploit fear during times of crises, then undermine political institutions and practices. One prime example is President Trump rejecting election results and thereby contesting the election itself as an institution. Indian Prime Minister Modi incited widespread anti-Muslim violence, infringing on the principles of religious freedom and minority rights. Populist President Jair Bolsonaro, echoing President Trump, has repeatedly criticized the integrity of Brazil's voting system and suggested that he may not accept the results of the election citing voters' fraud.

"The second challenge is the autocratic challenge — an old phenomenon in which non-democratic regimes have constitutions but abuse the rights of citizens, create an overarching executive branch and apply constitutionalism selectively. Lately, autocratic leaders such as Putin in Russia and Sisi in Egypt have been amending constitutions to eliminate term limits.

"The third challenge is the obstacle of drafting constitutions in democratizing countries, particularly where constitutions are introduced without going through a sound process of inclusivity, transparency, national ownership and citizens' awareness campaigns. In Egypt, both constitutions designed by presidents Morsi and Sisi excluded political opponents from the drafting process and thereby lacked legitimacy. In Tunisia, president Kais Saied drafted his own constitution against the background of another constitution previously drafted that had followed the right protocols. Saied used his populist appeal to contradict the existing constitution; he used the economic crisis to justify bypassing citizen input.

"I will conclude my presentation with recommendations to safeguard constitutionalism globally, based on my comparative outlook and personal involvement with the constitutional design track in the Syrian case."

Light snacks and drinks will be provided by Ozark Catering.