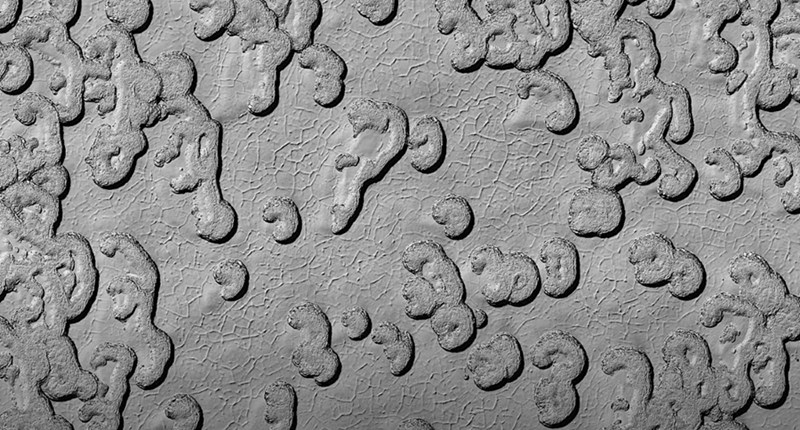 Two U of A researchers have received a three-year, $320,000 grant from NASA to study how carbon dioxide ice pits in the polar caps of Mars have formed and evolved over time. The goal is to better understand the seasonal and long-term cycles of these ice pits and how they impact the overall atmospheric dynamics of the planet.

Vincent Chevrier, an associate professor at the Arkansas Center for Space and Planetary Sciences, and Jason Tullis, a professor of geography with the Department of Geosciences and the Center for Advanced Spatial Technologies, will focus their efforts primarily on the south polar residual cap, which is characterized by sublimation pits, colloquially referred to as “the Swiss Cheese terrains.”

As on Earth, Martian polar caps expand in winter and shrink in summer, when the CO2 sublimates, turning directly from solid to gas, which can generate a thicker atmosphere and stronger winds. Generally, the sublimation pits appear to be growing over time, merging with other pits, while the cap itself is slowly shrinking. The researchers hope to better understand both the mechanism and time scale of the CO2 ice cycle. Were the caps laid down hundreds of thousands of years ago or just a few hundred? Is their formation a recurring or unique event?

Critical to their research will be frequent imaging acquired from the High Resolution Imaging Science Experiment, or HiRISE – an extremely powerful camera attached to the Mars Reconnaissance Orbiter. According to NASA, HiRISE “takes pictures that cover vast areas of Martian terrain while being able to see features as small as a kitchen table.”

“For 15 years, HiRISE has powered Mars exploration with the kind of breathtaking detail we are lucky to get from any planetary orbit,” Tullis said. “For me, there is tremendous excitement in the convergence of geospatial technologies and provenance information that supports a greater realization of what HiRISE offers.”

Does this research have applications here on Earth? Yes and no.

“Those caps are pretty unique to Mars,” Chevrier said. “We don’t have sublimation pits here on Earth. We mostly want to understand the climate of Mars.” While he thinks that having a better understanding of the planet’s climate would be critical someday to making Mars habitable to humans, he doesn’t think terraforming Mars is actually that likely. At least, not any time soon.

Mostly what Chevrier wants to do is better understand the solar system and how it evolved.