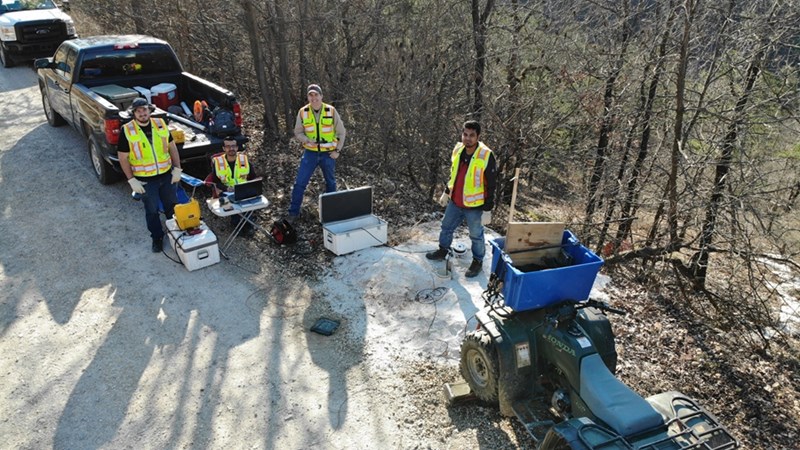 FAYETTEVILLE, Ark. – A University of Arkansas geotechnical engineer is collaborating with the Arkansas Department of Transportation to map subsurface conditions before road construction begins to identify issues early and help keep highway construction projects on track and on budget.

Clint Wood, a civil engineering associate professor and geotechnical engineer, creates profiles of subsurface conditions and soil composition by sending stress waves into the ground and measuring their response at the surface. The non-invasive technology is similar to how ultrasound imaging works on the human body.

The technology provides important information for highway designers and construction contractors, who’ve had to rely on imperfect methods for determining subsurface conditions, such as exploratory drilling, a strategy that can miss changes between limited drilling locations. Wood compares designing based on limited exploratory drilling to navigating with an incomplete map.

The research is conducted for and in conjunction with the Arkansas Department of Transportation. With an additional $115,318 grant, the transportation department has provided a total of $561,427 in funding. The work focuses on estimating the depth and stiffness of bedrock for new highway alignments and understanding subsurface conditions that cause slope instability. The latter is especially important for understanding how water moves through a slope. Unexpected changes in bedrock depth near slopes can also create pockets where water collects, which can cause the soil in the slope to become saturated, leading to instability.

Projects that encounter these issues can face substantial extra costs and delays while designers and contractors adapt the original plan or have to attempt another repair. Those problems can be avoided, or at least minimized, by better understanding the subsurface conditions through non-invasive testing.

In a separate project, Wood and several other U of A researchers — Jack Cothren, professor of geosciences and director of the Center for Advanced Spatial Technologies; Malcolm Williamson, research associate at CAST; and Rich Ham, associate director of operations management in Industrial Engineering — were awarded $193,109 in new project funding from the highway department to study the accuracy of LiDAR sensors on unmanned aerial systems, or drones.

Rather than using stress waves to measure underground conditions, LiDAR, which stands for “light detection and ranging,” is a remote sensing method that uses light in the form of a pulsed laser to measure ranges, or variable distances, between objects.

The highway department in interested in the technology because it can penetrate vegetated areas to help develop topographical models, which provide useful information for small-area projects such as bridge replacements.