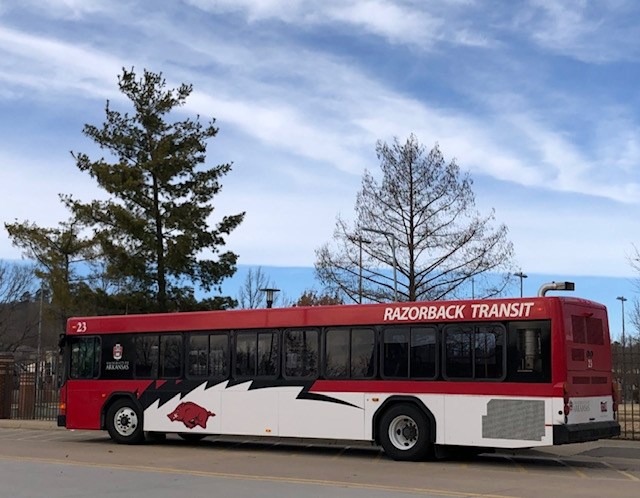 On March 18, 1662, in Paris, a public transportation system featuring several routes for horse-drawn carriages began. It was designed by French mathematician, physicist and religious philosopher Blaise Pascal, and even though the effort didn't last, it is seen as the forerunner of public transportation.

It is only fitting that March 18 is set aside as Transit Driver Appreciation Day.

Since its origins as a bus shuttle program in the late 1970s, Razorback Transit has served the U of A community and the city of Fayetteville, carrying as many as 2 million passengers during a normal year. (The current year is obviously an exception to that, as ridership has been drastically reduced in the midst of coronavirus concerns).

On occasion, a passenger will express appreciation for the drivers, as Karen McDowell of the Walton College of Business did in a recent email.  She wrote:

"I just want to let you know that John, on the afternoon run (Route 13) is very considerate and does a great job. Evan, on the morning run (Route 13) is also very nice. I do miss Christian on the morning routes. When I first started riding the bus many years ago, Christian was — and is — always friendly and helpful. These guys do a great job and I want to make sure they know it. I appreciate them. Your group must do a superior job of mentoring your drivers because it sure shows in their work ethic. Thank you to all the bus drivers who work every day to make sure we get where we need to be and on time."

Currently, Razorback Transit employs more than 30 drivers running at least 10 routes, and on a typical school day those routes run from 6:30 a.m. until 10:40 p.m. You may see current route information at Passio GO!

Adam Waddell, general manager of Razorback Transit, said that drivers have worked each day throughout the pandemic.

"In their role as providing an essential service," he said, "They have been helping people get to the doctor or to get to work or to get anywhere they need to be."