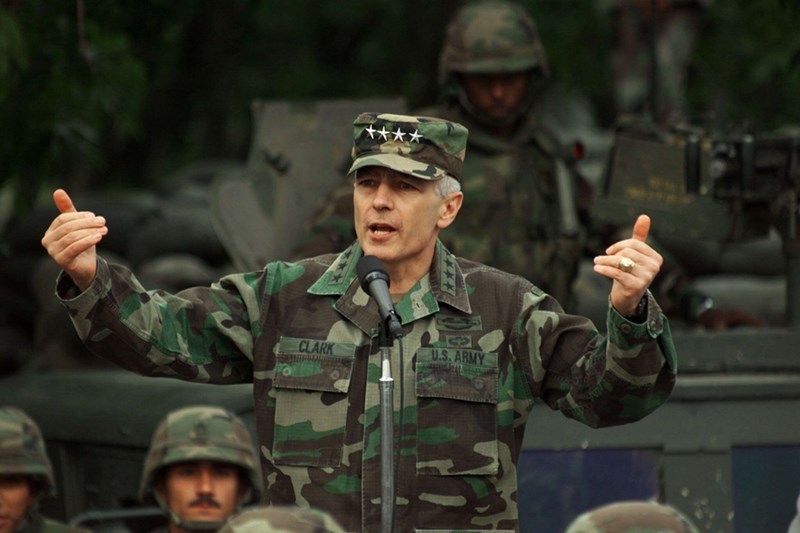 FAYETTEVILLE, Ark. – A global pandemic — a deeply divided Congress — challenges from China for global leadership. These issues and more will be addressed in an online lecture by Gen. Wesley Clark (ret.), who draws on a long, distinguished career of military service and civic engagement to pose the question, “What Now?”

General Clark’s lecture, hosted by the Honors College, will be offered via Zoom at 5:15 p.m. Tuesday, Jan. 26. All are invited to attend; please fill out this online form to gain access to the lecture.

President Joe Biden wants to “reestablish American leadership, but it’s going to be a pretty rough row to hoe,” Clark said. Clark looks beyond the immediate issues to a more pervasive trend.

“Since the early 1980s we’ve worked steadily to choose the private over the public sector, as if they’re in competition,” Clark said. “In fact, they’re synergistic.” As a result, support for government-funded initiatives like public health, education, national security and infrastructure has lagged.

“We’re not keeping up with the things that government should do … and it’s hard for ordinary people, living in the heartland, to see what the government does for them,” Clark said. “So many people in this state, and elsewhere, are challenged to survive.”

A CALL FOR UNITY

Clark describes the Jan. 6 assault on Capitol Hill as “a wakeup call for a lot of people” on a host of issues — racism, gun control, jobs and opportunities in middle America.

“There’s a lot of issues that surfaced in that, and it obviously shocked the world. … I hope that young people don’t use that as a turn off excuse. If anything, it’s a call to get involved — this is your country! People my age have already turned it over to you, … the country will be what you make it.”

Though he speaks to the next generation, Clark is still deeply engaged in tackling one of the toughest problems facing our nation. He founded the nonprofit organization Renew America Together to bridge the deep partisan divide that is stalling effective governance in Washington, D.C.

“The idea is to get some post-partisan politicians, people who are no longer asking for votes or asking for money, together from both sides of the aisle to talk about politics in a reflective way, to young people,” Clark said. “What’s it really like? Are the parties really enemies or are they just people expressing interests that could be synergistic, that could be ‘log-rolled’ into legislation.”

“We are honored to host General Wesley Clark. Given his long and distinguished record of leadership and service to our country, we look forward to hearing his take on these turbulent times,” said Lynda Coon, dean of the Honors College.

DISTINGUISHED CAREER OF SERVICE, AND A NEW ROLE

Raised in Little Rock, he graduated first in his class at West Point and completed degrees in philosophy, politics and economics at Oxford University (B.A. and M.A.) as a Rhodes scholar.

While serving in Vietnam, he commanded an infantry company in combat, where he was severely wounded and evacuated home on a stretcher. He later commanded at the battalion, brigade and division level, and served in a number of significant staff positions, including service as the director, Strategic Plans and Policy (J-5).

He was the principal author of both the U.S. National Military Strategy and Joint Vision 2010, prescribing U.S. warfighting for full-spectrum dominance. He also worked with Ambassador Richard Holbrooke in the Dayton Peace Process, where he helped write and negotiate significant portions of the 1995 Dayton Peace Agreement.

Today, Clark is a businessman, educator, writer and commentator. He serves as chairman and CEO of Wesley K. Clark & Associates, a strategic consulting firm; chairman and founder of Enverra Inc., a licensed investment bank; chairman of Energy Security Partners LLC; as well as numerous corporate boards including BNK Petroleum and Equinox Gold.

He is active in energy, including oil and gas, biofuels, electric power and batteries, finance and security. During his business career he has served as an advisor, consultant or board member of more than 90 private and publicly traded companies.

In the not-for-profit space, in addition to his work with Renew America Together, he is a senior fellow at UCLA's Burkle Center for International Relations, director of the Atlantic Council; and founding chair of City Year Little Rock/North Little Rock. A best-selling author, Clark has written four books and is a frequent contributor on TV and to newspapers.

His awards include the Presidential Medal of Freedom, Defense Distinguished Service Medal (five awards), Silver Star, Bronze Star, Purple Heart, honorary knighthoods from the British and Dutch governments, and numerous other awards from other governments, including award of Commander of the Legion of Honor (France). He has also been awarded the Department of State Distinguished Service Award and numerous honorary doctorates and civilian honors.

The Honors College Mic lecture series showcases notable leaders and top faculty members who share insights and expertise on a wide range of topics. Overall, these lectures foster intellectual conversation at the University of Arkansas through dialogue between lecturer and student, faculty and staff, and the wider populace.