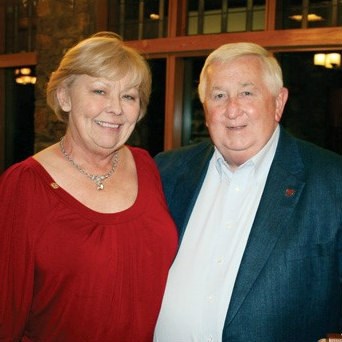 FAYETTEVILLE, Ark. – Alumnus Ken Shollmier believes the Anthony Timberlands Center for Design and Materials Innovation is an asset for the University of Arkansas and will result in more students studying at the state’s flagship. He and his wife, Linda Sue, have pledged $1 million to the facility.

Their gift counted in Campaign Arkansas, the university’s recently concluded capital campaign that raised nearly $1.45 billion to advance academic opportunity. A future space in the facility will be named in their honor, subject to the approval of Chancellor Joe Steinmetz and the Board of Trustees.

“I think it’s a wonderful thing for the state of Arkansas,” Shollmier said of the center. “It’s a great thing – it’s fantastic. What architects have gone to a school that offered something like this? Arkansas will become well known for the Anthony Timberlands Center, because no one has anything like it.”

Shollmier counts himself as a good friend of Peter MacKeith, dean of the Fay Jones School of Architecture and Design, and said he was involved in the conceptualization of the center from the beginning. Now that it is well underway, thanks to a lead gift of $7.5 million from John Ed and Isabel Anthony, Shollmier is excited to see it continue to take shape.

The planned Anthony Timberlands Center for Design and Materials Innovation is under design by Grafton Architects of Dublin, Ireland, the 2020 Pritzker Architecture Prize recipients, working with Modus Studio of Fayetteville.

“Ken and Linda Sue Shollmier have been steadfast, generous friends to the Fay Jones School community and the university for many years, and I have come to appreciate the constancy of their goodwill and counsel,” said MacKeith. “As the school began its initiatives in advancing the economic and environmental aspects of design innovation in timber and wood for the state, Ken provided particular encouragement and advice; he has understood the value of these efforts on multiple levels. The Shollmiers’ contribution to the Anthony Timberlands Center’s design and construction adds immense substance and momentum to the project, and will make visible their commitment to the school, the university and the further advancement of the state of Arkansas. I am very grateful to Ken and Linda Sue.”

Shollmier is a 1963 graduate of the Sam M. Walton College of Business and was honored as Entrepreneur of the Year in 2010. He was a member of the Campaign Arkansas Steering Committee for the university and is an honorary member of the Fay Jones School’s Dean’s Circle. He and Linda Sue were honorary chairs of the Fay Jones School’s campaign committee and are counted in the Towers of Old Main, a giving society for the university’s most generous benefactors.