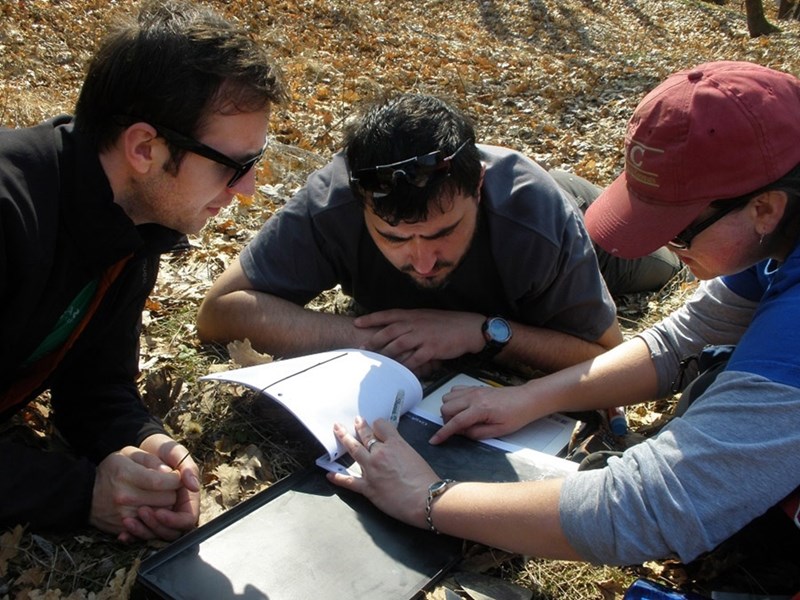 Prior to the COVID-19 pandemic, research team members Marius Robu, Alexandru Petculescu and Claire Terhune discuss where to look for fossils in the ?Oltet River Valley.

FAYETTEVILLE, Ark. – A re-analysis of fossils from one of Europe’s most significant paleontological sites reveals a wide diversity of animal species, including a large terrestrial monkey, short-necked giraffe, rhinos and saber-toothed cats.

These and other species roamed the open grasslands of Eastern Europe during the early Pleistocene, approximately 2 million years ago. Ultimately, the researchers hope the fossils will provide clues about how and when early humans migrated to Eurasia from Africa. Reconstructions of past environments like this also could help researchers better understand future climate change.

“My colleagues and I are excited to draw attention back to the fossil site of Grăunceanu and the fossil potential of the Olteţ River Valley of Romania,” said Claire Terhune, associate professor of anthropology at the University of Arkansas. “It’s such a diverse faunal community. We found multiple animals that hadn’t been clearly identified in the area before, and many that are no longer found in Europe at all. Of course, we think these findings alone are interesting, but they also have important implications for early humans moving into the continent at that time.”

About 124 miles west of the Romanian capital of Bucharest, the Olteţ River Valley, including the the important site of Grăunceanu, is one of Eastern Europe’s richest fossil deposits. Many Olteţ Valley fossil sites, including Grăunceanu, were discovered in the 1960s after landslides caused in part by deforestation due to increased agricultural activity in the area.

Archeologists and paleontologists from the Emil Racoviţă Institute of Speleology in Bucharest excavated the sites soon after they were discovered. Fossils were recovered and stored at the institute, and scholarly publications about the sites flourished in the 1970s and 1980s. But interest in these fossils and sites waned over the past 20 to 30 years, in part because many records of the excavations and fossils were lost.

Since 2012, the international team, including Terhune and researchers from Romania, the United States, Sweden and France, has focused on this important fossil region. Their work has included extensive identification of fossils at the institute and additional field work.

In addition to the species mentioned above, the researchers identified fossil remains of animals similar to modern-day moose, bison, deer, horse, ostrich, pig and many others. They also identified a fossil species of pangolin, which were thought to have existed in Europe during the early Pleistocene but had not been solidly confirmed until now. Today, pangolins, which look like the combination of an armadillo and anteater and are among the most trafficked animals in the world, are found only in Asia and Africa.

The researchers’ work was published in Quaternary International.