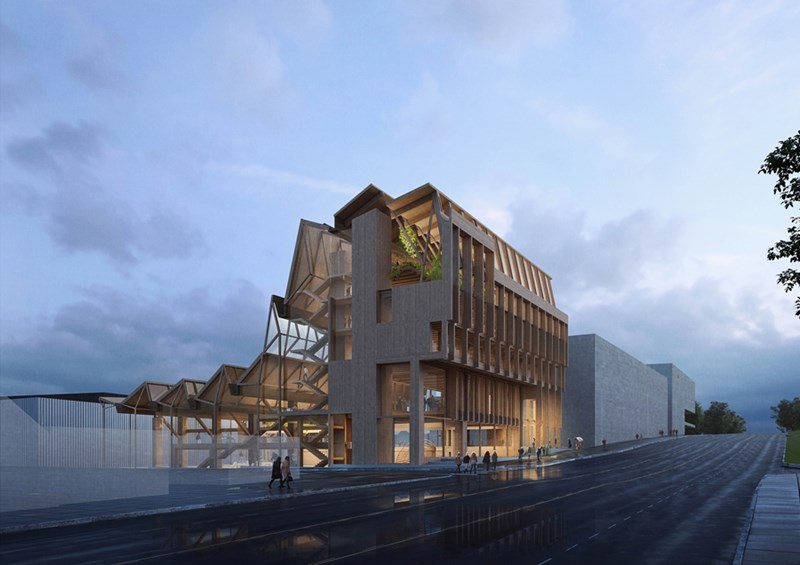 FAYETTEVILLE, Ark. – Ray Dillon and his wife, Deborah, are supporting timber initiatives at the University of Arkansas with a $1 million gift that will name the Ray C. and Deborah C. Dillon Entrance Hall in the Anthony Timberlands Center for Design and Materials Innovation.

Dillon considers Arkansas to be his adopted home state and loves what is being developed in timber innovation and wood design. With this gift, the Ray C. Dillon Chair in Arkansas Timber and Wood Design and Innovation is also being created.

The Little Rock couple’s gift counted in Campaign Arkansas, the university’s recently concluded capital campaign that raised nearly $1.45 billion to advance academic opportunity at the U of A.

“Ray Dillon has been the stalwart, enthusiastic friend and supporter of the Fay Jones School’s initiatives in timber and wood design and innovation since the moment we first spoke in the spring of 2016,” said Peter MacKeith, dean of the school. “Ray’s work on our behalf, and on behalf of the future of Arkansas forests, during these last four years has only further deepened our friendship and the overall impact of the initiative. The contributions that he and his wife, Deborah, are making to the Anthony Timberlands Center project, and to the leadership of the academic programs which the center will house, reinforce that support tangibly and durably, for the benefit of our students, our faculty and the environmental and economic betterment of the state. I look forward to entering into the Ray and Deborah Dillon entrance hall of the new building, and to identifying and welcoming the Dillon Professor of Timber and Wood Design Innovation. On behalf of the school, I am deeply grateful to Ray and Deborah and the Dillon family.”

The Ray C. Dillon Chair in Timber and Wood Design and Innovation will be used to attract and recruit highly qualified individuals to the position, supplement university support for outstanding faculty and provide the holder with resources to continue and further the educator’s contributions to teaching, research and public service. This includes leadership in architecture and design, specifically in timber and wood design and innovation, a mission of teaching, research and community engagement in practice, and the ability to critically imagine timber and wood design as an intrinsic element of contemporary design practice. The holder of the chair will also develop Garvan Woodland Gardens as an academic classroom, as well as an educational resource for the state while planning, leading, developing and advancing the Jane Ross Forest Institute for Environmental Stewardship.

The chair will be housed in the Anthony Timberlands Center and will also direct the school’s Master of Design Studies degree concentration in integrated wood design. Together, the chair and new regional research center will serve to stimulate the material, creative and economic development of the state and nation’s timber industries, as well as lead the exploration of the use of Arkansas timber and wood in design and construction.

“My hope is that this chair will serve as a mental catalyst for future students and help them understand what can be done with wood,” Dillon said. “Through their education, they can create new products using wood, and the forests will remain healthy and vibrant in return. We protect the forests by creating new markets for them.”

Dillon describes himself as a “farm boy from Mississippi” – hailing from Tylertown, Mississippi, where he met and married his high school sweetheart, Deborah. In high school, he committed to his dream of becoming a chemical engineer who worked in the forest products industry, thanks to influence from his mentor and brother-in-law, Bill Simmons.

Dillon graduated top of his class from Mississippi State University with a degree in chemical engineering. Against the advice of his dean, who wanted him to go into the petrochemicals industry, Dillon opted to work with the Crown Zellerbach corporation, an American pulp and paper conglomerate, and moved to Bogalusa, Louisiana, to work at the company’s mill as a project engineer.

After 10 years at the Bogalusa mill, he was transferred to Pine Bluff, where he was put in charge of managing and modernizing the former Weyerhaeuser paper mill, which was previously owned by the Dierks family. It was at this point in his career when he became acquainted with John Ed Anthony, and the two would negotiate volumes and prices for Anthony’s residual sawmill chips to be used at Dillon’s paper mill.

“I developed a tremendous respect for John Ed, and he became a mentor to me,” Dillon said. “We were competitors, but we respected one another. And one of the things we talked about was how a timber innovation center was needed in Arkansas.”

Dillon’s career continued with corporate roles at Gaylord Container Corporation  and eventually Deltic Timber Corporation, where he was named president and chief executive officer in 2003. Dillon retired from the company in 2016 after substantially growing its market value.

“Coming into that position was an amazing opportunity for me,” he said. “It combined my interests of woodlands, sawmills, real estate, and oil and gas and was the perfect fit.”

Throughout the remainder of his career, Dillon remained close friends with Anthony, and he says the “friendship, mentorship and respect” he has for Anthony is what inspired him to be a part of the Anthony Timberlands Center.

The $1 million contribution from Dillon and his wife will be split between two areas related to timber innovation: the Ray C. and Deborah C. Dillon Entrance Hall, which is subject to approval by the chancellor and Board of Trustees, and the Ray C. Dillon Endowed Chair in Arkansas Timber and Wood Design and Innovation.

The Anthony Timberlands Center is under design by Grafton Architects of Dublin, Ireland, the 2020 Pritzker Architecture Prize recipients, working with Modus Studio of Fayetteville.

“The Anthony Timberlands Center will help educate young people and raise awareness that there’s more than concrete and steel available for structural building materials,” Dillon said. “In Arkansas, we are growing more timber than we have markets for, and we have a saying: ‘A working forest is a healthy forest.’ This center will help us ensure new markets for wood products and that the forests remain healthy.”

In addition to his friendship with Anthony, Dillon’s gift was also inspired by the leadership of Dean Peter MacKeith and Chancellor Joe Steinmetz.

“I think Dean MacKeith is amazing,” Dillon said. “The university’s focus on statewide economic development will create job opportunities for graduates. And I’m equally impressed how Chancellor Steinmetz has taken the time to learn what the state needs and has responded by offering the appropriate educational components. I have the utmost respect for the chancellor and his strategic direction of the university.”

Dillon notes that his career would not be possible without his wife, Deborah, and her unwavering support. Deborah Dillon earned a Bachelor of Science in Medical Technology and worked in the healthcare industry. The couple has four children – Jonathan, Gregory, Robert and Amanda – and five grandchildren. Amanda Dillon Fields is a 2008 graduate of the university’s School of Law, and Robert Dillon is a 2017 graduate from the University of Arkansas for Medical Sciences.

In addition to his degree from Mississippi State University, Ray Dillon also holds an M.B.A. from the University of Chicago. At the University of Arkansas, he was a member of the Fay Jones School of Architecture and Design campaign committee and currently serves on the Arkansas World Trade Center board and the Dean’s Executive Advisory Board for the Sam M. Walton College of Business. He and Deborah are members of the Chancellor’s Society and are counted as Thoroughreds for their consecutive years of giving to the university.