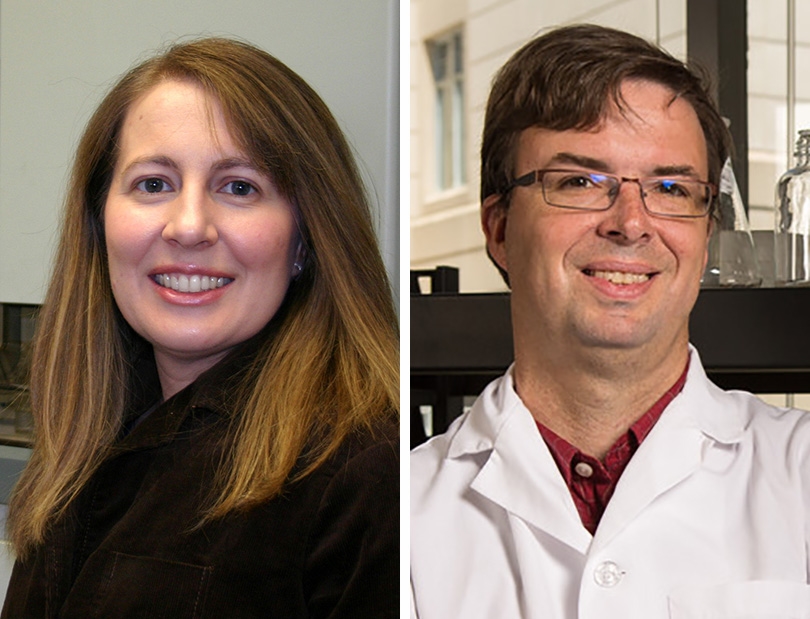 Christa (left) and Jaime Hestekin are both chemical engineering professors at the U of A.

FAYETTEVILLE, Ark. – Chemical engineering researchers at the University of Arkansas have developed a device that simulates the blood filtering and ion transport functions of the human kidney. The technology could transform treatment options for people in the final stage of renal disease.

“Basically we created a synthetic nephron – the structure that filters blood to disperse nutrients to the body and remove waste material,” said Christa Hestekin, associate professor of chemical engineering and principal researcher. “The system could work as a stand-alone device or in conjuction with peritoneal dialysis to control the chemistry of solutions used in treatment. And, minor modifications to the device could enable it to function as a wearable and potentially implantable artificial kidney.”

Hestekin works on a team including Jamie Hestekin, professor of chemicial engineering; Ira Kurtz, professor of medicine and chief of nephrology at UCLA Health; and several students in the Ralph E. Martin Department of Chemical Engineering at the University of Arkansas. Funded by the US Kidney Research Corporation, the work was published in Communications Materials, a Nature publication.

The researchers’ system simulates the critical ion transport work of the nephron. As the structural and functional unit of the kidney, the nephron regulates blood chemistry through filtration of the blood that delivers ions and organic molecules to the body before generating urine to be excreted.

To simulate tha filtration process, researchers inserted platinum porous meshes between two ion-exchange wafers to create a single electrodeionization wafer that uses an electric field to force ions through membranes. The meshes serve as electrodes when voltage is applied. The mesh electrodes enabled independent control of transport chambers within the device, which in turn allowed researchers to select different ions and adjust transport rates independently.

Combined with ultrafiltration, nanofiltration or reverse osmosis systems, the researchers’ technology could be integrated into an artificial kidney, Hestekin said.

According to the Centers for Disease Control and Prevention, 37 million people in the United States suffer with some form of chronic kidney disease. Of these, about 700,000 people per year will develop end-stage, renal disease, which requires dialysis or, as a last resort, a kidney transplant. The CDC reports that the average duration of patient survival on dialysis is slightly longer than seven years, and patients generally must wait about 10 years to receive a donated kidney. Roughly 100,000 people die each year while waiting for a kidney transplant.