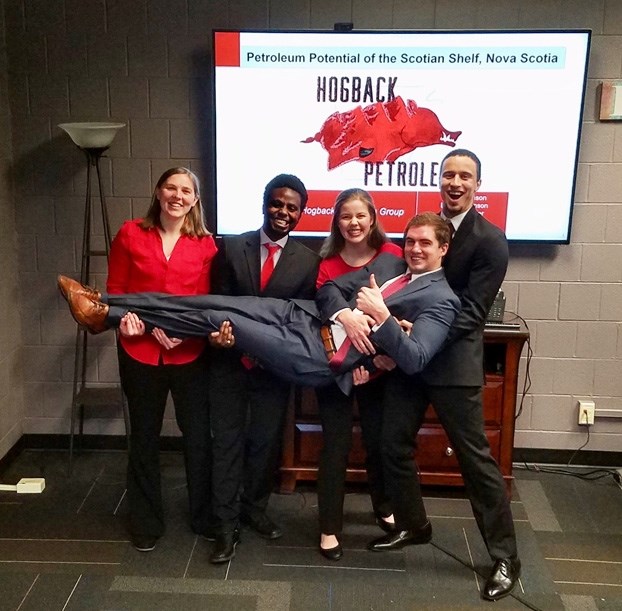 Each year, the American Association of Petroleum Geologists (AAPG) hosts the Imperial Barrel Award (IBA) competition for geoscience students from universities around the world.

The competition involves university teams competing to win scholarship funds and international recognition by analyzing a dataset (consisting of geology, geophysics, land, production infrastructure, and other relevant materials) in the eight weeks prior to a regional competition. Regional winners go on to compete in an international competition.

Each team delivers their results in a 25-minute presentation to a panel of industry experts, with judges selecting the winning team on the basis of the technical quality, clarity and originality.

And this year, U of A's team from the Department of Geosciences took top honors in the prestigious competition's semifinal round, which means they will now advance to the international level of the competition.

Christopher Liner, chair of the Department of Geosciences, said that each spring semester the department holds a class for the AAPG's IBA competition. The class and resulting U of A team consists of up to five students who plan to compete in the regional competition.

"The U of A has participated since 2012 when we placed second, and we placed third in 2017. This is our first regional win," Liner said. "I offer the team and Steve hearty congratulations on a job very well done!"

Liner said the competition is also an incredible learning opportunity because students have the chance to use state of the art technology on a real dataset, receive feedback from an industry panel of judges, network with potential employers in the audience, and win cash awards for their school.

This year's top three regional teams included the U of A in first place, University of Kansas in second place, and Missouri Science and Technology in third place.

"This win is even more impressive because these amazing students had to quickly adapt once the in-person competition was switched to a remote presentation due to the coronavirus situation," Liner said. "You can imagine what that does to preparation and final adjustments. The team presented from a teleconference room in the Bell Engineering Building and did a truly fantastic job."

Liner also credited Schlumberger — a worldwide provider of technology for reservoir characterization, drilling, production, and processing to the oil and gas industry — which provided its industry-leading software tools to the department and team.