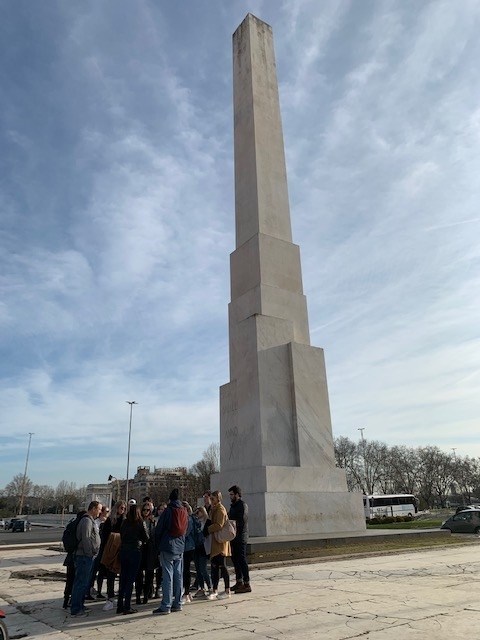 The communication, journalism and global studies students studying at the University of Arkansas Rome Center in spring 2020 toured the Foro Italico (formerly the Foro Mussolini), to learn about how Benito Mussolini and his fascist regime used propaganda.

The Foro Italico is a sports complex built in the late 1920s and 1930s in Rome and is a preeminent example of Italian fascist architecture and propaganda.

Laura D'Angelo, an instructor of history of architecture who teaches at the Rome Center, gave the tour. D'Angelo educated the students about how to translate the visual code used to communicate the propaganda that was inspired by events of ancient history or recent past, all read through the fascist rhetoric perspective. She also discussed the role of art in fascist propaganda.

"The students were fascinated by the actual propaganda messages created by Mussolini's regime, and were surprised to see these messages still exist," Jan Wicks said. "Certainly, in Germany, you would not find a monumental obelisk with Hitler's name on it or mosaics with fascist slogans. Students remarked that the size, scale and repetition of fascist imagery in the Foro Italico demonstrated the image of power and strength Mussolini was trying to convey. Studying propaganda in Rome is so important because so few large-scale examples of fascist propaganda still exist."

The primary examples of propaganda at the Foro Italico include the Mussolini obelisk, large marble blocks inscribed with historical events, and black and white mosaics.

The obelisk has "Mussolini Dux" inscribed on the side, promoting the former fascist dictator and the 10th year of his regime. Obelisks were used by ancient Roman emperors to represent power and victory. By having an obelisk installed at the Foro Italico, Mussolini was associating himself with ancient Rome, victorious emperors like Augustus, and portraying his regime as establishing a new Italian empire.

The large marble blocks, which marked major events in the fascist regime including Mussolini's founding of his newspaper and his conquest of Ethiopia, represented a chronology of the events of the fascist regime.

The optimistic Mussolini had five blocks left uninscribed to promote his future successes. However, after World War II, some of these blank blocks were inscribed to note the end of Mussolini's fascist regime in 1943, the referendum to change Italy from a monarchy to a republic in 1946, and the beginning of the Republic of Italy in 1948.

As D'Angelo explained, one view is that this was done to alter the meaning to represent the fascist past as part of Italian history.

The black and white mosaics at the Foro Italico include fascist relics such as the words "molti nemici, molto onore" (many enemies, much honor).

Students at the Rome Center can study and consider what it may have been like for everyday Italians to walk through the Foro Italico, experiencing how citizens may have responded to the propaganda.