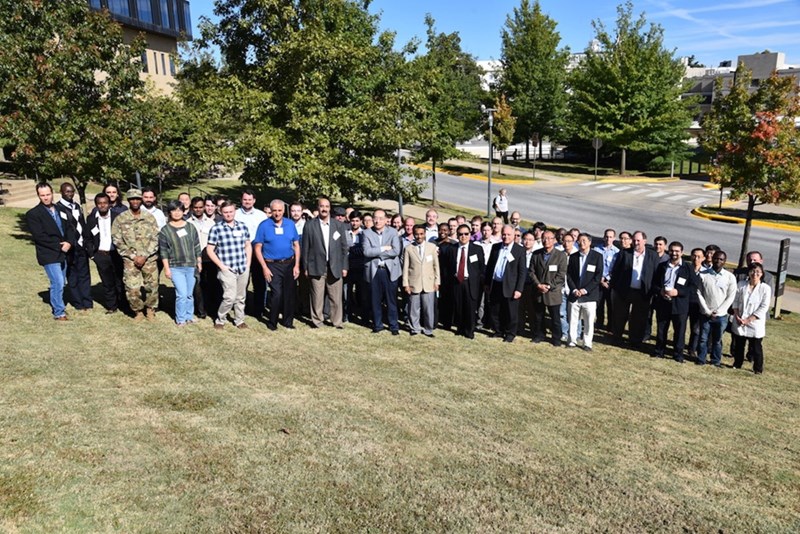 Collaborators from across the nation gathered at the University of Arkansas Oct. 18 to kick off a $7.5 million research project aimed at developing a new generation of infrared imaging devices.

Collaborators from across the nation gathered at the University of Arkansas Oct. 18 to kick off a $7.5 million research project aimed at developing a new generation of infrared imaging devices.

Led by Shui-Qing "Fisher" Yu, associate professor of electrical engineering, representatives from universities, government agencies, defense industry, and private businesses were in Fayetteville for the inaugural meeting of a Multidisciplinary University Research Initiative grant, funded by the Air Force Office of Scientific Research under the U.S. Department of Defense.

Gregory Salamo, Distinguished Professor of physics, is co-principal investigator on the project. Yu and Salamo will lead a multidisciplinary and multi-institutional team of researchers who will design, fabricate and test infrared detectors made with silicon germanium tin.

Infrared imaging technologies are used by the military for night vision systems. They currently rely on semiconducting alloys such as mercury cadmium telluride and other material-based photodetectors. These have several limitations, including a complex and expensive manufacturing process, low production yield and poor uniformity over large areas. These limitations have a negative impact on wide-range infrared visibility, especially in areas with poor environmental conditions.

To address these limitations, the Air Force Office of Scientific Research granted the MURI award to Yu, Salamo and a team of researchers from Arizona State University, Dartmouth College, University of Massachusetts - Boston and George Washington University. The researchers will investigate using silicon germanium tin alloys for lighter, faster and more energy-efficient infrared imaging devices with a higher signal-to-noise quality. The researchers' goal is to build systems that can be manufactured at a lower cost, compared to the current generation of infrared imaging technology.

Yu said the meeting was a successful first step. "Based on the feedback from government and defense industry participants, everyone believes that this is a very promising material, and we have strong research team," he said. "Our team has already started the intensive research work and close collaboration. We are very confident we will be able to make great strides for future infrared imaging technology."