U of A Joins Select Company, Earns Gold Status as a Bicycle Friendly University 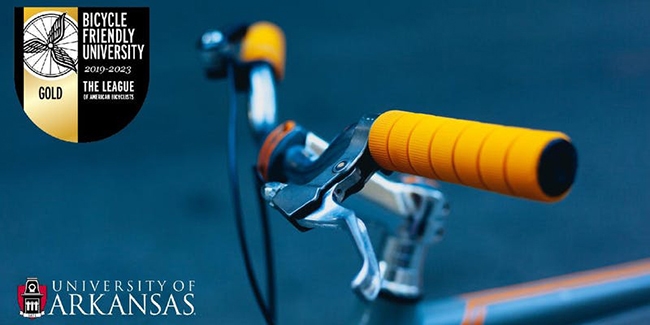 FAYETTEVILLE, Ark. – Efforts to make the University of Arkansas campus more bicycle friendly continue to be appreciated locally while earning higher levels of recognition nationally. The League of American Bicyclists recently announced the U of A’s first Gold award designation as a part of the Bicycle Friendly University program – putting the university in select company with only 24 other institutions including Colorado, Harvard, Yale, UCLA and Kentucky, the only other SEC institution to earn the award.

“To get this award really shows how much the university and our community have done to focus on making our campus environment one where people can bike safely and conveniently while contributing to healthier, more sustainable futures,” said Dane Eifling, campus bicycle and pedestrian coordinator.

The university rolled out the VeoRide bike sharing program last fall and earlier this year created the first Discovery Bikeway on campus, marking a convenient shortcut for cyclists who want to avoid pedestrians during class changes. The Razorback Regional Greenway, a shared-use trail that connects the region’s major downtown areas and other community attractions, runs along the eastern and southern edges of campus. Options for a safer, more pronounced bicycle corridor through campus, likely along Maple Street, are now being considered. 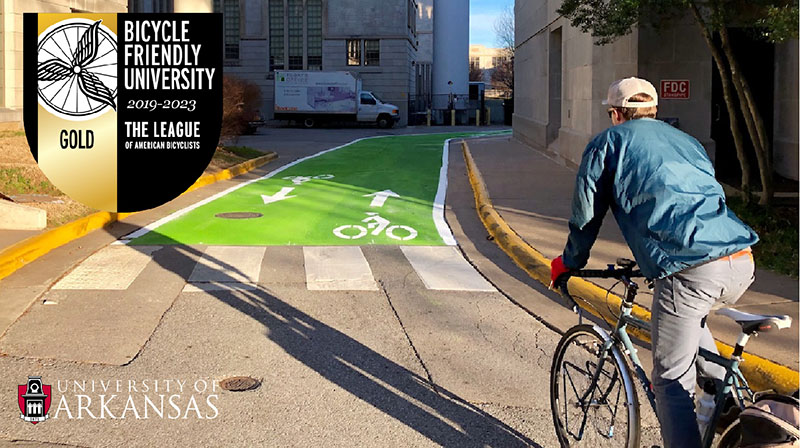 “We’re interested in anything we can do to encourage cycling to, from and through our campus,” said Eric Boles, director of the Office for Sustainability. “Cycling is often the fastest and always the most fun way to explore Fayetteville.”

The Bicycle Friendly University program highlights colleges and universities for promoting and providing a more bikeable campus for students, faculty, staff and visitors. Efforts are evaluated in the areas of engineering, encouragement, education, enforcement and evalulation/planning.

The university received Silver status in the Bicycle Friendly University program in 2016 after receiving an honorable mention in 2014. Only eight schools have received Platinum status, the League of American Bicyclists’ highest award.

The community is invited to help celebrate the university’s award at a Bicycle Friendly University Golden Get-Together event at the Inn at Carnall Hall from 5-7 p.m. Wednesday, Oct. 23. Light snacks and refreshments will be served. A pop-up bike valet will also be provided as bicycles are (always) encouraged.