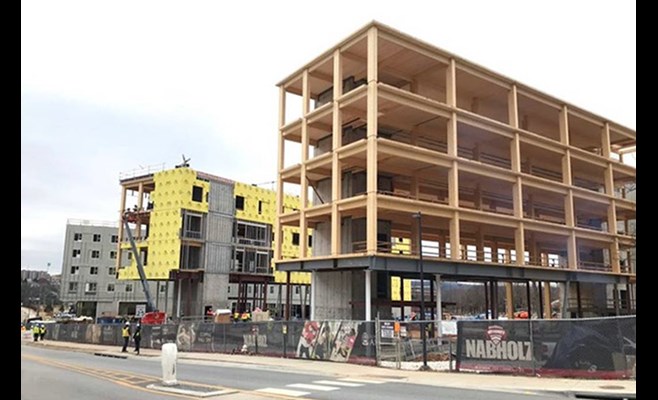 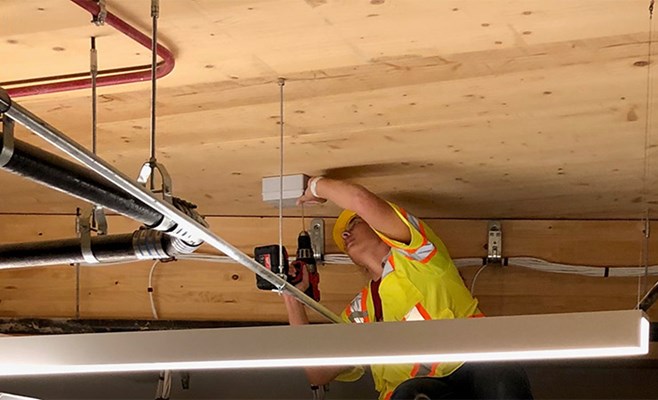 Elizabeth Poblete, a civil engineering student graduate student, installs the sensors and their enclosure in Adohi Hall earlier this summer. 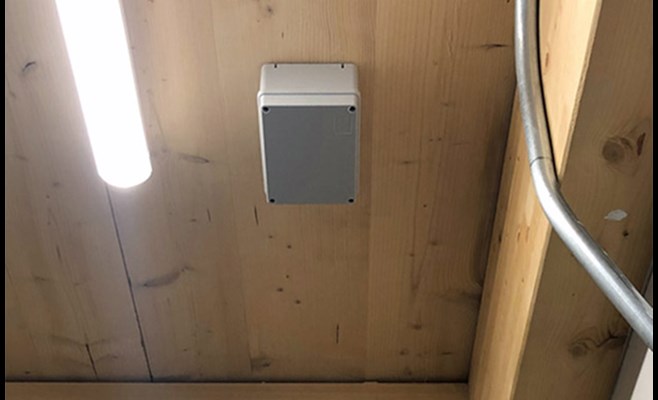 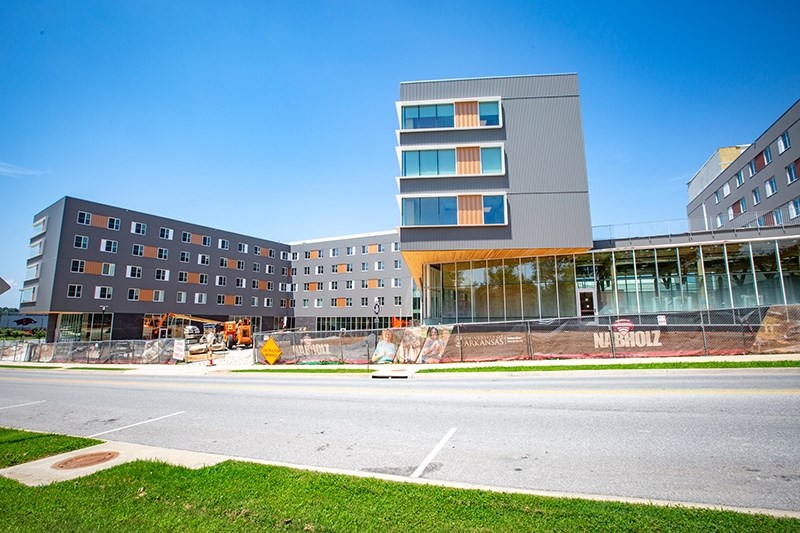 University of Arkansas researchers are collaborating to monitor the moisture content in the cross-laminated timber panels used to construct Adohi Hall, the new student residence hall on the Fayetteville campus.

FAYETTEVILLE, Ark. – A new residence hall on the University of Arkansas campus will provide more than just a vibrant living experience for students. The buildings themselves will serve as a testbed for researchers to study a unique building material.

Researchers hope their investigation into the innovative use of cross-laminated timber panels can influence future use of the materials by the design and construction industries.

With a $100,000 grant from the U.S. Endowment for Forestry and Communities, U of A professors in the Fay Jones School of Architecture and Design and the College of Engineering have collaborated to measure and analyze the moisture content of these panels.

Tahar Messadi, an associate professor of architecture and the 21st Century Chair in Sustainability in the Fay Jones School, is the principal investigator of the grant. His co-investigator is Cameron Murray, an assistant professor of civil engineering.

Adohi Hall is the nation’s first large-scale mass timber residence hall project. Adohi is a Cherokee word that means “woods.” It was selected as the name of the new hall because of the use of timber in the design and to honor and remember the native people who passed near the area during the Trail of Tears period.

Construction on the residential areas of Adohi Hall wrapped up this summer, and students moved into them in August. Two five-story residential buildings are connected by a third building that provides a common area. The approximately 200,000-square-foot project with 708 beds is a design collaboration by Leers Weinzapfel Associates of Boston, Modus Studio of Fayetteville, Mackey Mitchell Architects of St. Louis and OLIN of Philadelphia.

The new residence hall also accommodates the Living Learning Communities for students interested in academic areas that include the arts, architecture and design, and entrepreneurship and innovation.

CLT and the timber industry

Cross-laminated timber (CLT) panels are among the materials used to construct this new residence hall, located on the south end of campus between Pomfret Hall and Bud Walton Arena. A CLT panel consists of several layers of kiln-dried lumber boards stacked, with the wood grain running in alternating directions, then bonded with structural adhesives and pressed to form a solid, straight, rectangular panel. An odd number of layers form a panel – typically from three to seven layers. The residence hall is built with five-layer panels.

Finished CLT panels are lightweight yet strong, and they offer superior acoustic, fire, seismic and thermal performance, Messadi said. These prefabricated wood panels also are fast and easy to install and generate almost no waste on the construction site.

In this new residence hall, CLT panels are only used in floors and ceilings. The columns and beams are made from glue-laminated pieces, which are bonded together with the wood grain of each layer running parallel rather than perpendicular, as CLT panels do.

Messadi said their research has major implications for the design and construction industries, as well as potential economic development within the state.

“CLT is a novel material, and it has great potential of becoming predominant in the construction industry. It’s just that we need to know every aspect of it, and most importantly, the moisture behavior,” Messadi said.

Arkansas is the nation’s third-largest timber producer, is centrally located within the United States and has a legacy of renowned timber architecture. Such innovative mass timber technologies can boost the state’s timber and wood products economy.

“Mass timber is interesting because, not just in Arkansas, sustainability is a growing issue in the construction industry,” Murray said. “Concrete and Portland cement are hard on the environment. They can release a lot of carbon dioxide, whereas wood is a renewable resource.”

“In Arkansas, we have an underutilized timber industry, so it’s a potential opportunity in the state to make panels here, or sell our lumber to places that make panels,” Murray said.

That university-funded grant planted the seed for more research, and it allowed them to engage in other funding sources such as this federal funding for monitoring moisture, Messadi said. Both researchers also received encouragement and support for this project from Peter MacKeith, Dean of the Fay Jones School of Architecture and Design, and Micah Hale, Chairperson for the Department of Civil Engineering.

Through this grant, the U of A research team will add to existing data that reveals the behavior of CLT in various regions around the country. A CLT structure performs differently in the varying climates and conditions of Michigan, Arizona, Arkansas and Florida, for instance.

“They want to understand, so, if they promote CLT, they are able to be informative about how to handle this material in a given climatic region,” Messadi said.

These results can help inform protocols and procedures regarding manufacturing of the panels – as well as transportation, construction and installation – that may demand a tailored response for different regions, he said.

“Stronger evidence resulting from a long-term assessment of moisture performance in CLT structures in reference to each climatic region will remove the barrier for architects, structural engineers and building owners to endorse the superiority of CLT as a sustainable, cost-effective alternative to other structural materials – and with a significantly lower carbon footprint,” Messadi said.

The U of A researchers join others already evaluating CLT performance. The Design Building at the University of Massachusetts Amherst was the first CLT academic building in the country and the largest installation of wood concrete composites in North America. It also was designed by Leers Weinzapfel Associates. Similar moisture monitoring protocols are deployed in this building, as well as Carbon12, an eight-story mixed-use building in Portland, Oregon, designed by Path Architecture.

Researchers are focused on studying the moisture in CLT panels because – just as the branches of rain-soaked trees become limp and sag – wood with too much moisture loses its stiffness and becomes weak, Messadi said. Wood is also susceptible to mold and fungus, and its wetness could cause steel connections to rust.

The moisture content of a CLT panel is generally held at around 12 percent – plus or minus 3 percent. “But anything higher than 20 percent would be susceptible to surface fungal attacks and higher than 25 percent would compromise the structural integrity of the timber through decay and rotting,” Messadi said. Also, if the layers within a panel start to become wet and dry, they could disrupt the “dimensional stability,” causing them to warp and buckle.

To monitor the effects of rain and humidity in Adohi Hall, sensors have been placed in CLT panels in moisture-prone areas — bathrooms, kitchen and laundry areas, and near the exterior of the buildings. The sensors themselves were placed in the outer and middle layers of the five-layer CLT panels, with a cluster of three sensors in each location. A total of 135 sensors were installed in clusters of three to measure moisture levels; four gateway data transmitters also were installed.

“Moisture could be very low at one location, but it could be high at another,” Messadi said. “You want to track that in order to reach comprehension about the amount of moisture in the CLT and the range of moisture fluctuations (wetting and drying).

The moisture levels will be read every 30 minutes, and that information is sent to a server that is managed by Omnisense. The collected data will be processed at the end of the first year, and researcher will continue to collect and analyze data annually for another two years.

“Our aim is to find out whether a stable reading is maintained throughout the two years or not,” Messadi said. “Once we look at that data, we will then understand the sort of remedies we will be able to bring forward to make sure that the CLT behaves in the right way and in the right setting, according to newly developed standards.”

This is the first time Messadi and Murray have collaborated on research. Messadi has worked with these humidity sensors before – in controlled experiments on reinforced concrete, as well as monitoring humidity in an interior environments. Murray has conducted extensive experimental work on concrete. The grant also provides funding for a graduate student in civil engineering and an undergraduate architecture student to assist in the research.

In construction, architects and engineers work together to realize a completed project. Murray said this research collaboration makes sense, and it will provide real information about the behavior of this building material.

“Engineers want to know that things are going to behave the way they assume they will – the only way to find out is to try it out,” he said. “The research that we do in labs is more limited. This is a real structure. That’s really valuable to engineers.”

About the Fay Jones School of Architecture and Design: The Fay Jones School of Architecture and Design at the University of Arkansas houses professional design programs of architecture, landscape architecture and interior design together with liberal studies programs. All of these programs combine studio design education with innovative teaching in history, theory, technology and urban design. A broad range of course offerings equips graduates with the knowledge and critical agility required to meet the challenges of designing for a changing world. Their training prepares students with critical frameworks for design thinking that also equip them to assume leadership roles in the profession and in their communities. The school’s architecture program was ranked 26th in the nation, and the 12th best program among public, land-grant universities, in the 16th Annual Survey of America’s Best Architecture and Design Schools, a study conducted in 2015 by the Design Futures Council and published in DesignIntelligence.