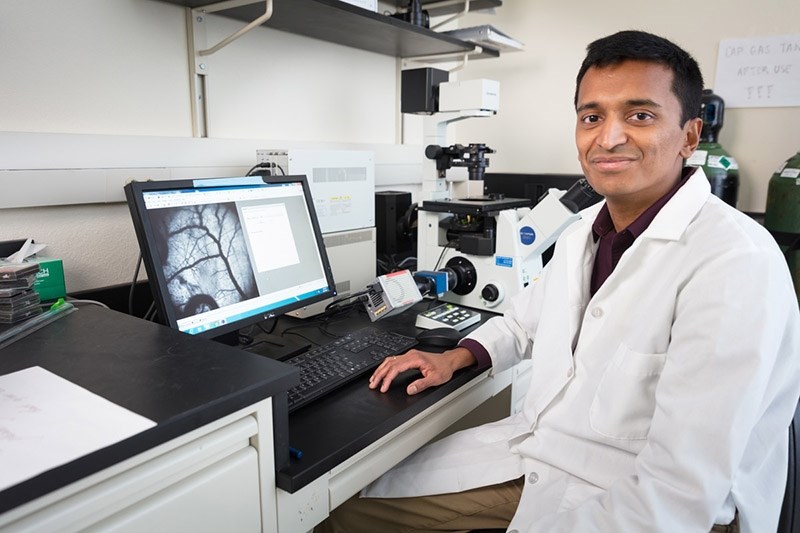 In 2019, it's almost a cliché to say everyone knows someone whose life has been impacted by cancer.

Narasimhan Rajaram knows that. He knows that because he's been conducting cancer research since he started as a graduate student at the University of Texas at Austin in 2005. But he also knows that because when he was an undergrad in India, the woman who would become his mother-in-law was receiving aggressive radiation therapy for ovarian cancer.

The after-effects of that therapy would ultimately claim her life. Now, Rajaram is an assistant professor of biomedical engineering at the University of Arkansas, where he examines how cancerous tumors grow and become radiation-resistant, and what that means for how doctors treat them.

That research recently received a major boost in the form of a 2019 CAREER award from the National Science Foundation. Officially called the Faculty Early Career Development Award, NSF CAREER awards are the most prestigious awards the NSF grants to early-career faculty members who excel in both research and teaching.

The five-year, $500,000 grant will allow Rajaram to dive deeply into the root of radiation resistance in tumors.

'We still don't know which tumors are going to respond'

Rajaram's research centers on head and neck cancer, but the idea has broad implications. If researchers can understand why some tumors become radiation-resistant and others don't, they might be able to switch patients with resistant tumors to other radiation treatment strategies earlier and potentially improve the effectiveness and efficiency of cancer treatments.

Radiation treatment uses intense beams of energy to kill cancer cells. It's used to treat nearly every type of cancer, and more than half of patients with cancer receive the therapy as part of the treatment process, according to the Mayo Clinic.

The beam of radiation is focused, much more focused than chemotherapy, but it's not perfect. Sometimes organs near the site of the tumor sustain collateral damage.

"Radiation therapy has advanced quite a lot these days," Rajaram said. "Now, it is pretty focused, and you can spare a lot of normal tissue. But, for example, with head and neck cancer, radiation has strong effects on normal tissue, such as the salivary glands."

That's why Rajaram and his team are working to identify a way to tell which tumors will respond to radiation treatment and which ones will not.

They hope to do that by building an instrument that can look at a tumor's oxygen supply, how that oxygen is being used and what that means for the cell's metabolism.

"We believe there is a metabolic link that can help us understand why tumors become radiation resistant," Rajaram said.

"For a long time, conventional thinking was that the more hypoxic (low-oxygen) a tumor is, the more resistant it is. For radiation therapy to work, you need oxygen. In the presence of oxygen, radiation causes irreversible DNA damage, which is why there is so much damage to normal tissue exposed to radiation. In the absence of oxygen, cancer cells have a way of repairing DNA damage."

"More recently, there is evidence from our lab and other labs that even if certain cancer cells are provided lots of oxygen, they don't necessarily wind up responding to treatment. They seem to be modifying their metabolic profile to avoid DNA damage. So, it could be well-oxygenated and you might draw the wrong conclusion about whether the tumor would respond to radiation therapy."

The primary oxygen carrier in the body is hemoglobin within blood vessels. Rajaram is working to build a microscope that can quantify oxygen supply within tumor blood vessels by imaging hemoglobin and simultaneously visualize the metabolism of cells adjacent to the vessels.

To quantify the metabolic profile, Rajaram will measure the fluorescence from two key cellular components — NADH and FAD. Fluorescence is the emission of light by a substance that has absorbed light or other electromagnetic radiation. The research combines the instrument-building side of biomedical engineering with tumor biology. With that perspective, Rajaram hopes to find solutions that can be implemented in a clinical setting.

"We believe that what we learn here can eventually be packaged into something clinically translatable, a new technology that can help clinicians better understand why tumors respond to radiation," he said.

NSF CAREER awards are meant to support not only research, but also educational outreach and training of the next generation of scientists.

For Rajaram's project, he'll be sharing his knowledge of optics and imaging with middle schoolers across Arkansas. He'll do that by building imaging-based kits that can be sent to teachers throughout the state to work into their lessons. The kits include content to help teachers expand on age-appropriate topics already in the curriculum.

The University of Arkansas hosts a variety of STEM-based summer camps that Rajaram considered working with, but in the end, he saw an opportunity to bridge a gap.

"Kids go to these camps, and then once the camp is over, we realized it would be nice if they could continue that experience throughout the year," he said. "Beyond that, one of the needs we identified was that it would be beneficial for students who couldn't attend our camps to have access to these materials, too."

The kits will include the parts to build a simple telescope, filters to understand colors and polarizers. The idea, Rajaram said, is to teach how light interacts with matter.

"Absorption, scattering. I think the kids are already seeing some form of that every day," he said. "In addition, other phenomena such as looking at the back of a DVD or through a soap bubble, you see a rainbow. Why do you see that?"

Those formative years can position students for a successful future in science.

In fact, Rajaram said, young researchers have played a key role in earning the CAREER award.

"When I started, I didn't have any graduate students helping me, so a lot of the work I showed as preliminary data was performed by undergrads," he said. "They were collecting and publishing a ton of data. It's been really nice to be on a campus with this high quality of undergrads engaged in research."

Raj Rao, head of the department of biomedical engineering, said Rajaram's boldness in research and dedication to outreach has been key for the department.

"I am extremely proud of Dr. Rajaram for not only being an outstanding researcher in his own right, but an educator who takes the role of motivating and inspiring the next generation of scientists and engineers seriously," Rao said. "His perseverance in working on an idea that is highly risky- the possibility of identifying the differing characteristics between tumors and using those differences to define therapies is indeed transformative and has enormous opportunities for precision and personalized medicine. He also has a keen eye in identifying the needs of undergraduate students in the classroom and in his lab; and connecting with them in a way that gets the best out of them and prepares them well for their future careers."

Rajaram's journey to Fayetteville required him to take some chances. Growing up in India, he developed a love of history, but found himself pushed into the world of science.

"When you grow up in a place like India, the choices are engineering or medicine," he said. "It's more about what you're good at rather than what you like. The question is always, 'Will you get a job?' Math and science weren't really subjects that gave me trouble, so it's what I gravitated toward."

He pursued an undergraduate degree in electrical engineering, which he said didn't hold his interest.

"But getting into the senior electives, I took a course on biomedical instrumentation. It was that aspect of being close to the medical field and exploring different things, providing solutions for people that excited me. The fact you can do that as an engineer, that was why I applied for biomedical engineering programs in the U.S."

Rajaram's focus was initially on the technological side of biomedical engineering — building devices, but he said he was eventually drawn to the biological side of the field. Now, his CAREER-winning research combines his expertise in technology with an interest in biology.

"Rather than just saying 'we can build a device to measure parameters A and B, let's see if they're different, I want to know 'Why are A and B there? What is their biological basis? Is there a C and D?"

That thinking is how Rajaram wound up at the University of Arkansas. After a postdoctoral fellowship at Duke University, he started looking for faculty positions, but at most places, he would have been the only researcher with his expertise in devices to study oxygen levels in tumor vasculature.

"One of the things you're told when you apply for faculty positions is that you want to be able to establish your own niche area, but there's a risk when you're the only person in your area," he said. "You start to run out of opportunities to collaborate.

Muldoon and Quinn are experts in microscopy — something Rajaram said he saw as an opportunity to break out of his comfort zone.

"When you're by yourself at some university, you're probably going to do the things you're good at, there's not going to be much chance to do things outside your area. The great thing about being here has been being able to get into those new areas. I'm not a metabolic imaging person — that started when I came here. And we've been able to be very productive in terms of publications and grants, by being able to brainstorm these ideas."

And now, that unique position has led Rajaram to one of the NSF's most prestigious awards. It's an accomplishment he said took him by surprise.

"My reaction was shock initially," he said. "Throughout my training in all these tech-heavy labs, the focus was always on clinical translation and hence the National Institutes of Health. You'd never hear about the NSF. I'd almost never considered the fact I could apply for the CAREER award. The real push came when Raj Rao became the chair — he encouraged us to look at programs that might be receptive to our work, and we found a division of the NSF that I thought might be receptive."

And receptive it was.