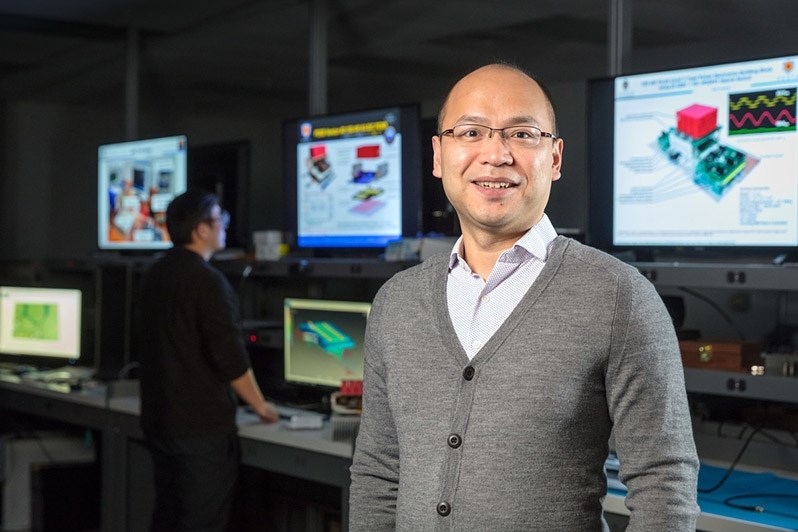 Some researchers stumble into their passions. A chance encounter with a professor or a spur-of-the-moment decision to attend a program. Fang Luo is not one of those researchers.

Luo has known he was going to be an electrical engineer since he was in middle school. His father is an electrical engineer, and Luo has fond memories of working alongside him, coding an embedded computer hardware system as a child. What Luo could not have known then was that one day he'd find himself in Fayetteville, Arkansas, having received one of the National Science Foundation's most prestigious awards for early-career faculty.

Luo, an assistant professor of electrical engineering, has received a $296,804 Faculty Early Career Development Award for 2019, known as a CAREER award. The NSF describes the CAREER Award as its most prestigious award in support of early-career faculty who have the potential to serve as academic role models in research and education and to lead advances in the mission of their department and organization.

Luo's award will support his research and teaching related to semiconductor-based electromagnetic interference mitigation. It's a problem that is becoming increasingly prevalent as engineers work to make electronics smaller, faster and more efficient.

One way to make an electronic device more efficient is to improve how it switches between alternating (AC) and direct currents (DC). Improving the switching process can mean less energy is lost with each switch, devices can sustain faster switching for higher frequencies and higher temperatures.

The problem is, switching quickly can cause all sorts of undesirable side effects, which can impact neighboring parts of a device.

The issue is holding back modern electronics design for devices ranging from cell phone chargers to electric vehicle batteries. As designers find ways to make switching even faster, Luo hopes to find solutions to new problems that come along with the progress.

"I'm basically trying to solve the side problems caused by new technology," he said.

"When I was a student just working with silicon, we were told there was no ideal switch," Luo said. "But now, we have the chance — the new device is so ideal, we're getting there."

But in getting so close to an ideal switch, researchers are encountering never-before-seen side effects.

Near-ideal switches in power electronics converters generate a lot of noise that can travel through the entire power electronics system and interfere with other parts of the device/system. Researchers have considered a variety of ways to deal with that interference, but for Luo, the answer lies within the semiconductor itself.

"Since we're seeing those high-frequency noises being caused by semiconductors," he asked, "why not use the semiconductors themselves to solve the problem?"

The idea works like a noise-cancelling headphone, just at a much higher frequency. Luo plans to take the noise produced by the switch and re-inject it back into the system before it can interfere with the rest of the device.

The interference issue has already manifested itself in modern electronics design.

Luo points to modern shipboard power systems. "People use semiconductor-based power electronics systems to improve the system efficiency and power density, yet they have to use bulky passive filters to take care of noise interferences," he said "these filters, aka 'necessary evils', engage more than 30% of the total system volume and weight."

Luo said it's just one example of the far-reaching applications of his technology.

"This is beneficial for anyone who needs a power supply," he said. "This technology is supposed to work for small power supplies like our phone chargers all the way up to big ship and aircraft power systems. We're trying to make this approach into a more generic solution that can be used in many different ways."

Making near-ideal switches a market-level reality for electronics could have positive impacts on the environment, too, Luo said, by reducing the cost of electric vehicles, leading to the potential for wider adoption.

Preparing the next generation for the real world

With each CAREER Award, a portion of the funding supports the awardee's teaching efforts. Luo plans to use his funding to teach a new course focused on electromagnetic interference, known as EMI.

It's a topic that typically only receives a cursory mention in electrical engineering curriculum, but Luo said it can play a critical role in the success of a real-world project.

It's important for students to learn the fundamentals of EMI mitigation as they're preparing to enter the workforce, Luo said, because it's a problem that can go undetected until late in a project.

"You don't see the urgent need to solve these problems at the very beginning when you're switching at a lower frequency using traditional technology," Luo said. "But as long as we're trying to push the technology further, the density further, the side effects that were considered a low-order problem at the beginning become a bottleneck.

"You don't want to spend $1 million designing a device and then another $1 million fixing the problems in it."

That mindset will be critical for future electrical engineers.

"I want students to be prepared to face the problems of the future. We don't need to be focusing on the same problems from 20 years ago," Luo said.

Luo's love of electrical engineering is rooted in the field's combination of theory and application. Luo said he loves studying physics and considering theoretical questions, but also wants to produce a device that will help real-world businesses and consumers.

"It's not like you're trying improve theories just by playing with equations," he said. "You can still play with equations, but you get to use this knowledge to see how it can benefit society."

With his CAREER award, Luo will be able to do just that.

Despite his success, Luo said the best is yet to come.

"Arkansas is definitely growing," he said. "I think we have a really good environment here — I mean the research infrastructure. We have the National Center for Reliable Electric Power Transmission, the High-Density Electronics Center. When I joined U of A, I had great support from the College. I have a nice lab space, I have the latest equipment. All those resources helped me get here. And, of course, my students are awesome."