Research on Disk Galaxies Sheds Light on Movement of Stars

Right, the Whirlpool Galaxy is an example of a disk galaxy. Left, Ryan Miller.

FAYETTEVILLE, Ark. – University of Arkansas astrophysicists have taken an important step toward solving the mystery of how disk galaxies maintain the shape of their spiral arms. Their findings support the theory that these arms are created by a wave of denser matter that creates the spiral pattern as it travels across the galaxy.

“The structure of spiral arms in disk galaxies is a mystery,” said Ryan Miller, visiting assistant professor of physics. “No one knows what determines the shape of these spirals, or why they have certain numbers of arms. Our research provides a clear answer to part of that mystery.”

Disk galaxies, including the Milky Way, comprise 70 percent of known galaxies. They are characterized by their spiral-shaped arms, but astronomers are not sure how these form and maintain themselves.

The mystery begins with a simple paradox: stars in a disk galaxy orbit a central mass called a “galactic bulge," and the stars closer to the center orbit faster than the stars toward the edge. But, if the spiral arms were composed of a fixed group of stars, the ones on the edges of the pattern would have to cover more distance than the stars in the middle in order to maintain the spiral pattern. Like runners in the outer lane of a circular track, they would need to move faster to keep their position in the group.

In the 1960s, astronomers proposed the “density wave theory” to explain this paradox. The theory holds that the arms of disk galaxies are not formed from static bundles of stars. Instead, these arms are waves of denser areas that move through the stars. The stars move in accordance to the laws of physics, and as they orbit the center of the galaxy, they encounter these denser areas.

Many astronomers have compared the wave of denser matter to a traffic jam in which the speed of stars traveling in a circle around the center of a galaxy is affected by the denser matter in the same way that motor vehicles are affected by a congested part of a highway. They slow as they meet the congestion and then move more easily after getting past the traffic jam.

The denser areas also affect clouds of gas that pass through these regions.They become compressed, collapsing into new stars.

Miller worked with associate professors Julia and Daniel Kennefick, postdoctoral scholar Rafael Eurfrasio, doctoral graduate student? Douglas Shields, and graduate students Mahamed Shameer Abdeen and Erik Monson, as well as Benjamin Davis of Swinburne University of Technology in Australia, also a graduate of the U of A. They have published their results in the Astrophysical Journal.

Miller and his colleagues provided support for the density wave theory by looking at stars of different ages and comparing their locations to that of the center of the density wave. 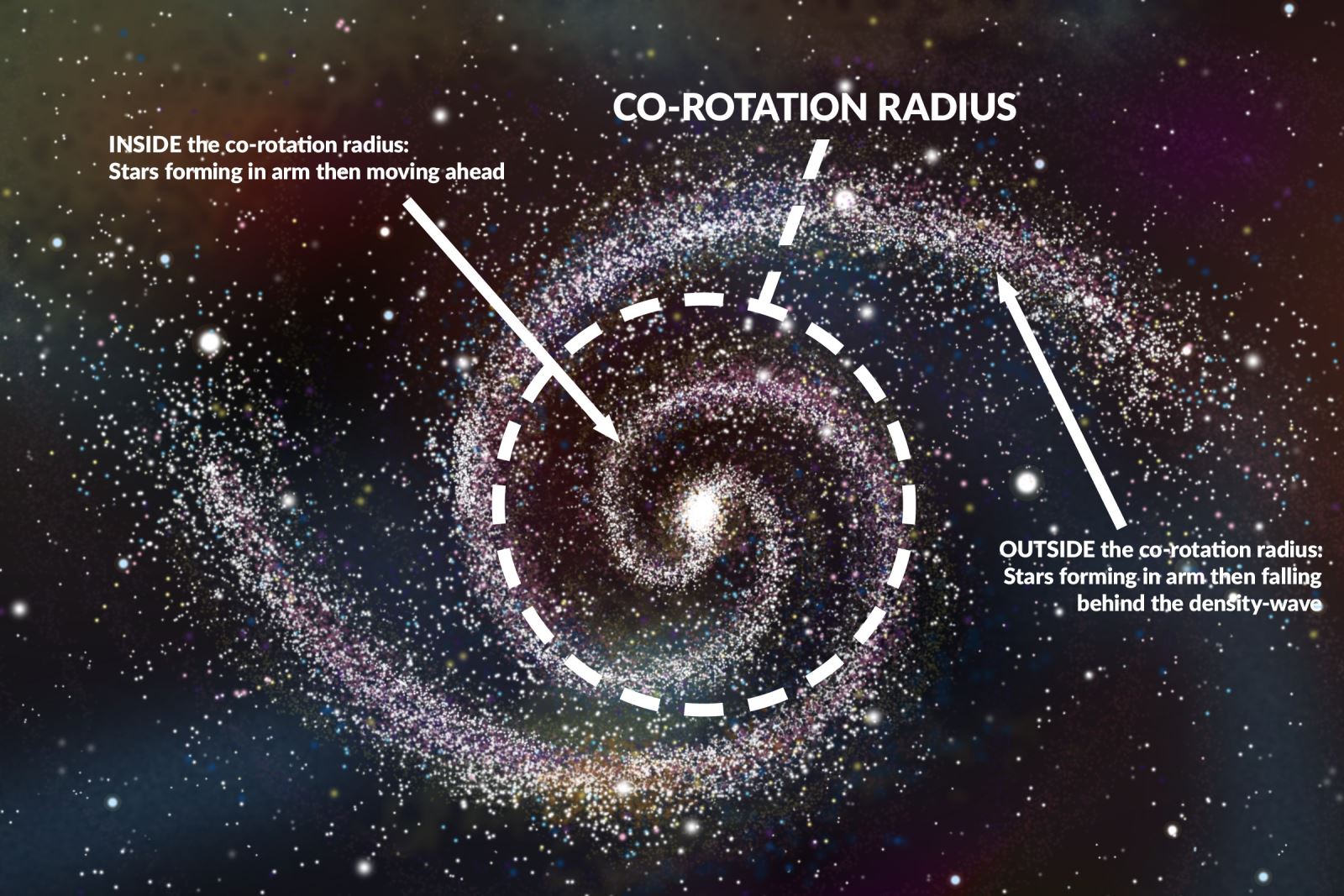 The researchers examined images of galaxies in the NASA/IPAC Extragalactic Database, which is operated by the NASA Jet Propulsion Laboratory at the California Institute of Technology. For each galaxy, they examined images of different wavelengths of light, representing stars of different ages. They found that each group of stars formed an arm with a slightly different “pitch angle,” which is the angle of the arm in relation to the center of the galaxy. By comparing these different angles to the angle formed by the center of the density wave, they showed that the location of these groups of stars matches the prediction of the density wave theory.

Although the research provides evidence for why the spiral arms maintain their shape, questions remain. It’s easy to understand why a traffic jam occurs when you get to a car accident that reduced three lanes to one, but determining what creates the denser waves is still an open question.

Part of Miller’s previous research is published under his birth name, Hamed Pour-Imani.