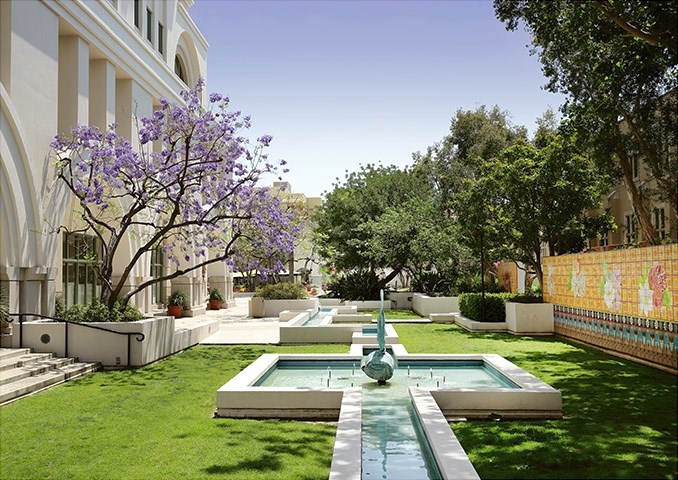 Photograph by Jill Paider, courtesy of The Cultural Landscape Foundation

FAYETTEVILLE, Ark. – The exhibition "The Landscape Architecture of Lawrence Halprin'" will be on display April 8 through May 13 in the Fred and Mary Smith Exhibition Gallery in Vol Walker Hall on the University of Arkansas campus.

This exhibition was organized on the centennial of the landscape architect Lawrence Halprin's birth by The Cultural Landscape Foundation (TCLF) in partnership with the National Building Museum. It presents highlights from his extensive career but is by no means exhaustive, nor does it illustrate notable lost works.

Lawrence Halprin (1916-2009) was fascinated by how people interact in, and move through, communal space. His interest in such humanistic aspects of public space owed much to a stint between high school and college on a kibbutz in what was then the British Mandate in Palestine (now Israel). That communal live/work experience influenced the collaborative working process that became a hallmark of his practice.

Born in New York, Halprin moved to San Francisco following military service in World War II and graduate study at Harvard University. His 60-plus-year career began in the office of pioneering Modernist landscape architect Thomas Church. He opened his own practice in 1949. Halprin's revolutionary work was set apart by strong, expressive forms that evoked the structures and processes of nature.

Stylistically, Halprin was firmly rooted in the Modernist tradition, though later projects, such as the Los Angeles Open Space Network, also incorporate aspects of Postmodernism. An important and constant influence on his work was his wife Anna, an acclaimed modern dancer and choreographer, who was equally unconventional and enthusiastically experimental.

Halprin extensively chronicled his ideas and projects in drawings, paintings and notebooks, many of which are now housed at the University of Pennsylvania's Architectural Archives. His critically important books Cities (1963) and Freeways (1966) presaged today's urban renaissance. Halprin is the subject of numerous scholarly publications and a video oral history produced by The Cultural Landscape Foundation (TCLF) and available its website.

Halprin received numerous awards in his lifetime including the National Medal of Arts (2002), the nation's highest honor for an artist. He died on Oct. 25, 2009, at the age of 93, at his home in Kentfield, California, just months after closing his office.