U of A Geosciences Professor Discovers Rare Original Maps 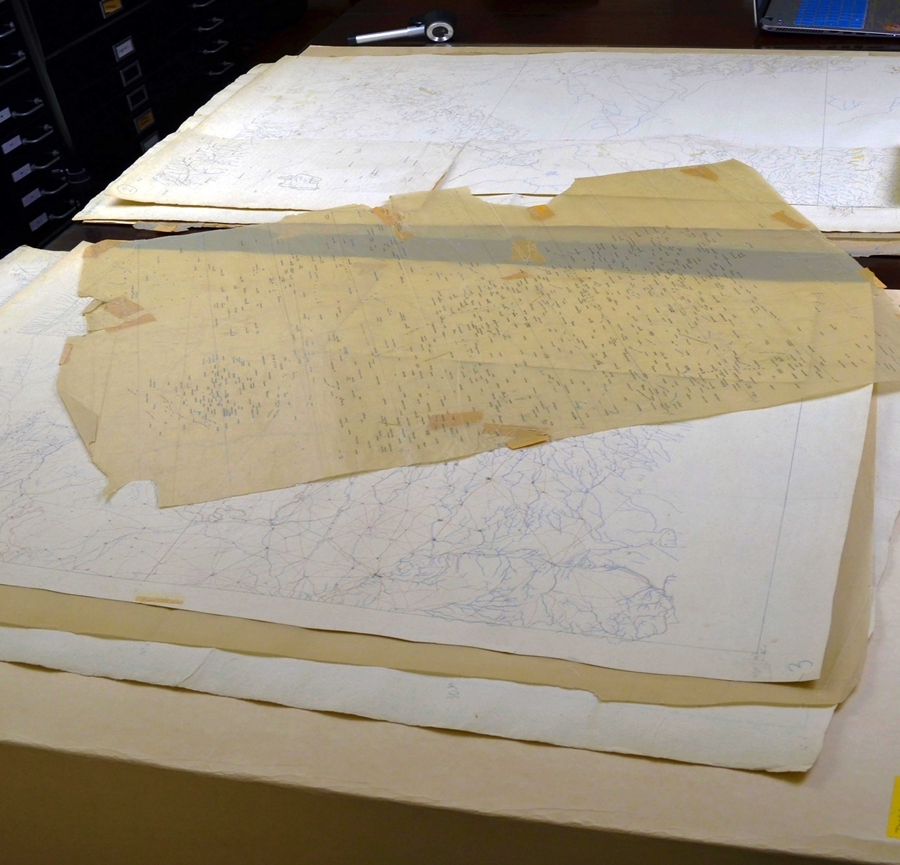 The original maps of Gertrude Bell's travels are shown here with the various parchment overlays commonly used in early cartography. Bell's routes were mapped with contemporary explorers Aloise Musil, Vyvvan Holt, and Henry Field in this rare map collection. These maps depict the exact routes of their travels, which were previously unknown at this detail or scale.

When Tom Paradise, University Professor in the Department of Geosciences, was asked to examine the eminent map collection of the international Explorers Club, he never anticipated that this would lead to him to discover several very rare maps previously unknown for nearly a century.

Paradise has extensive professional cartographic and historic cartography experience and training, having published five atlases and more than 3,000 maps, in addition to having taught cartography since 1992 in the U.S., Jordan, Morocco and Italy.

So, when the Explorer's Club asked him to oversee the task of assessing their unique map collection, Paradise said he was honored and excited.

In October 2018, he visited the Explorers Club with geosciences and cartography graduate student, Casey Goodman, where they spent a week examining this unique collection. However, Paradise and Goodman were unprepared for the surprises they would find.

“It was really amazing to find three ‘lost gems’ after only a week,” Paradise said. “The collection was incredible, and very historically significant – especially the Gertrude Bell maps.”

They first examined a number of rare maps that were previously inventoried. These included original maps by Alexis-Hubert Jaillot (1632-1712) and Nicolas Sanson (1600-1667). Maps by Louis Maurice Adolphe Linant de Bellefonds, the chief engineer of the Suez Canal, were also found. He created them in 1855 as the initial survey plans for the Suez Canal, which would open in 1869.

In addition, linen maps with hand-written notes (1868-1870), were examined that represented the epic journey of Sir Richard Burton and John Hanning-Speke traveling across eastern-central Africa to identify Lake Victoria (Lake Nyanza) as the source of the Nile, and the maps of the early Thule (Western Greenland) Expeditions led by the Danish Arctic explorers, Peter Freuchen and Lauge Koch (c.1912).

However, of greatest significance was the discovery of original hand-inked and sketched maps, with matching tracing paper overlays created by Gertrude Bell with the Royal Geographic Society. The large map set (48" by 36") represents a unique compilation of routes across the Transjordan from 1912-1925 by Bell and three of the greatest exploring cohorts of their time: Alois Musil, Vyvyan Holt and Henry Field.

Bell (1868-1926) was celebrated for her travels and work with British Intelligence and T.E. Lawrence (Lawrence of Arabia). She was recently characterized by film actress Nicole Kidman in Werner Herzog's, Queen of the Desert (2015).

Musil (1868-1944) was a Moravian explorer, theologian and priest who wrote widely of his travels throughout the Arab world. Holt (1896-1960) worked as the British representative to the Mandates Commission of the League of Nations, and the Oriental Secretary at the British embassy in Baghdad until 1944. Field (1902-1986) was an American archaeologist and a member of the Field Family (e.g. Marshall Fields, Field Museum), who joined the Field Museum and University of Oxford archaeological teams excavating in Kish, Iraq (1923-1933).

Milne's world-renowned cartography overlapped with Bell's time in London with the Royal Geographic Society; Bell and Milne were well acquainted, and her early travels – through the Levant and Western Asia – were accurately mapped by Milne.

In November 1915, Bell was summoned to Cairo to work at the newly created Arab Bureau; however, previously she had traveled extensively through this region and these newly discovered maps represent the only known depiction of her travel routes.

The maps, wadis, buttes, peaks, plains and archaeological sites were represented by Milne to such an accuracy that these same tracks could be retraced today.

“This is indeed a most exciting discovery,” said Mark Jackson, head curator of the Gertrude Bell Collection and Archives at Newcastle University. “The RGS in London has her fieldnotes and books, but they do not include maps. This is a significant find in Levantine exploration history."

“The accuracy of the locations, features, names, elevations and latitude-longitude is remarkable for the period and indicates that these maps were being readied for publication at the time they were obtained or given to the Explorers Club,” Paradise said.

“[These discoveries] are nothing short of transformative for our extensive and unique map collection,” said Lacey Flint, the Explorers Club’s chief archivist. “This work uncovered hidden gems that hadn't been seen or handled in nearly a century.”

Paradise contacted the cartographic specialists at Christies and Sotheby's auction houses in New York and London for appraisals of the maps’ value. He said these experts described the maps as unique and representing the "holy grail" to map collectors. The experts told Paradise that auction bidding could easily fetch values exceeding six digits in a specialized map sale.

About Tom Paradise: Paradise has been a professor in the Department of Geosciences since 2000, in addition to having previously served as director of the King Fahd Center for Middle East Studies from 2005-2010 and again from 2015-2017. He has conducted research in the Middle East and North Africa since 1990, however, it is his work on Petra's architecture, geography, geology and history that has been most recognized, having been published in more than 50 papers, reports, chapters, and books. In addition, Paradise's work has been showcased on television including PBS' NOVA, Smithsonian, Discovery, NatGeo and Travel Channel specials. Paradise continues to conduct research in Petra with students, and to act as a consultant for a number of film and TV show creators, producers and writers on the topic of "Petra, the rose-red city half as old as time."

A version of this story also appeared in the Fulbright REVIEW.