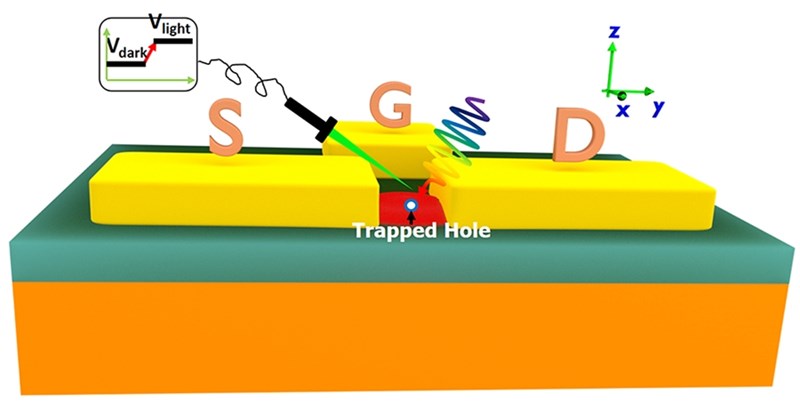 Schematic diagram of the single photon detector. The photon is represented by the wavy multi-colored line and the red dot represents the quantum dot.

FAYETTEVILLE, Ark. – A team of researchers including U of A engineering and physics faculty has developed a new method of detecting single photons, or light particles, using quantum dots.

Single photon detection is a key element to enable use of quantum information, a method of transferring information that is much faster and more secure than current methods. This technology has other applications as well, including biological and medical imaging, spectroscopy, and astronomical observation.

Since quantum information can be transmitted using an infinite variety of quantum states, the sender and receiver must both agree on which state they are using to encode and interpret the data. An outsider intercepting the signal would have little way of reading it without this knowledge.

A photon is a quantum of light. When a photon enters a detector in a quantum information system, its energy is transferred to an electron and this results in a current or a voltage. This effect is so small, though, that it is difficult to detect. Other designs for photon detectors solve this problem by using a device called an avalanche photodiode to amplify the current or voltage, but this approach tends to add delays to the detection and increases background noise.

The new approach created and modeled by these researchers uses a quantum dot, which is a semiconductor nanoscale particle, to detect single photons. Compared to other methods, the change in voltage caused by a single photon in this detector is large, with a low background noise level.

The researchers have used computer models to demonstrate that their design can detect single photons more accurately than existing technologies.