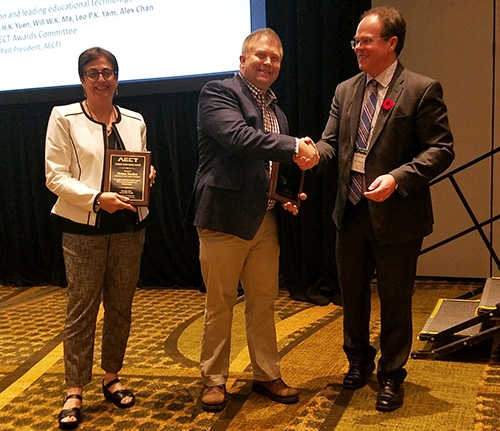 Dennis Beck, center, is congratulated by Eugene Kowch, president of the Association for Educational Communications and Technology. Mahnaz Moallem, left, of the University of North Carolina Wilmington, also received an award.

Dennis Beck won a third award in two years recently from the international professional association in his field, this time for exemplary leadership in online K-12 education. Beck, a University of Arkansas associate professor of educational technology, received the award for his work in establishing Arkansas Connections Academy, an online school for grades K-10.

He received the annual achievement award from the Association for Educational Communications and Technology last month in Jacksonville, Florida. Last year, Beck won research awards from the same organization.

Beck co-founded Arkansas Connections Academy, which offers online education to students who may need options other than traditional school because of their interests and circumstances including special needs or extracurricular activity. The academy began operation last school year (2016-17).

In preparing for the Arkansas Board of Education's review of the school charter proposal, Beck gathered research as well as survey information and witness testimony about the effectiveness of online education. He serves as president of the school board.

"I am a researcher and I used research to show how online education would work here, but the board also wanted to hear how this school would positively impact Arkansas children," he said.

Receiving the award provided a trip down memory lane, Beck said. With the success of the online school, it was gratifying to know that his research resulted in more than journal publications.

"This is a real-life school serving 800 students in the state," he said. "We give students an opportunity to flourish who may not be served well in the traditional school environment."

His work with Arkansas Connections Academy has also given Beck the opportunity to conduct research in collaboration with the Arkansas Virtual Academy, which is another online school, and the Fayetteville and Springdale school districts, which offer online learning opportunities for their students.