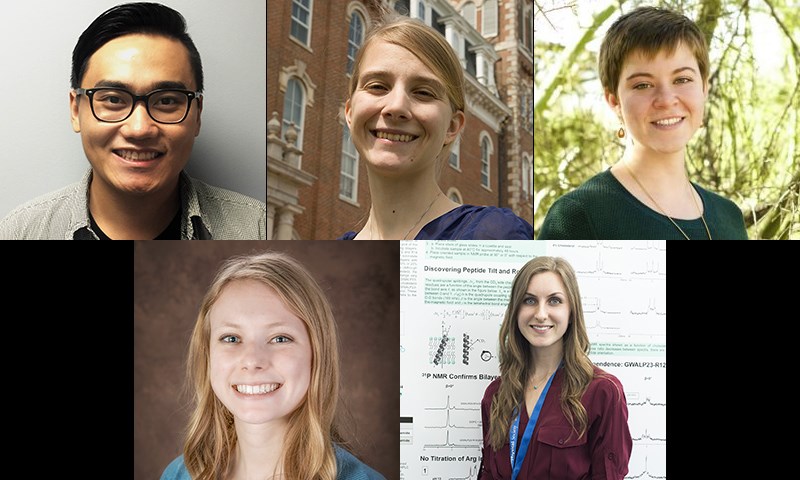 FAYETTEVILLE, Ark. – Three University of Arkansas undergraduate students and three recent graduates have received National Science Foundation Graduate Research Fellowships for the upcoming academic year. The highly competitive awards are made to students in science, technology, engineering and mathematics and recognize academic excellence and the potential contribution that they will make to their field and to society at large.

The NSF Graduate Research Fellows are:

The sixth student, a recent graduate, has asked not to be named at this time.

Each fellowship is worth $34,000 per year and can be renewed for up to three years. Along with the renewable stipend, each student’s institution will receive $12,000 per year to offset tuition costs, bringing the total amount of funding awarded in these six fellowships to more than $800,000.

In addition to the Fellows, seven more U of A students received honorable mentions: undergraduates Christian Goodnow, David Jacobson and Christopher Matthews; current U of A graduate students Haley Brown, Hillary Fischer and Ashly Romero; and recent U of A graduate Michaela Mertz.

“When our students receive highly competitive awards like the NSF Graduate Research Fellowships, I am reminded just how remarkable University of Arkansas students are. Not only are they intellectually curious and academically ambitious, but they also want to give back to their communities,” said U of A Chancellor Joseph Steinmetz. “The National Science Foundation recognizes outstanding students who are going to pursue research careers in a STEM field, but it also looks for those researchers who have an interest in the broader impacts of the work they do. These six University of Arkansas recipients are both stellar scientists and really great people, who are going to make differences in their fields and in our communities.”

Madeline Meier is a senior honors chemistry major in Fulbright College. In her current research under David Paul, associate professor of chemistry, she studies biosensors. Their work resulted in a recent publication in the Journal of the Electrochemical Society, with Meier as a second author. She was also recently named a finalist for the National Institutes of Health Oxford-Cambridge Fellowship.

Jordana Thibado graduated in 2016 with an honors degree in chemistry from Fulbright College. Under the guidance of her mentor Roger Koeppe, distinguished professor of chemistry and biochemistry, she published a paper based on her undergraduate research in biochemistry as first author. She is currently pursuing a doctorate in physiology, biophysics, and systems biology at Weill Medical College of Cornell University in New York City.

“The College of Engineering is extremely proud of Alex Khang and Kelly McKenzie,” said John English, dean of the College of Engineering.  “The NSF Graduate Research Fellowships are highly sought after, very competitive awards. Both of these exceptional students have been very active in research, and talented faculty have supported their efforts every step of the way. It’s a winning combination.”

“What is so striking about these amazing Fulbright College students who have been selected to receive these awards is the breadth of their studies, which range from biosensors to solar cells to neurodegenerative diseases to X-ray binaries in spiral galaxies,” said Todd Shields, dean of Fulbright College. “They are asking big questions in big fields, and the answers are already leading to publications in major journals. I am pleased — and not surprised — that these very capable students have been selected for this national recognition.”

Since 1952, the National Science Foundation has awarded the highly competitive Graduate Research Fellowship to around 50,000 students in the STEM fields. The graduate fellowship program is one of the NSF’s oldest and most highly competitive, with roots in the foundation’s original 1950 charter. Each year, approximately 2,000 applicants are selected through a rigorous NSF peer-review process. Each grant supports graduate study that leads to a research-based master’s or doctoral degree. NSF Graduate Research Fellows are promising young mathematicians, scientists and engineers who are expected to pursue lifelong careers marked by significant contributions to research, teaching and industrial applications in science, mathematics and engineering. This group of fellowship recipients raises the total number of awardees from the U of A to 128.

U of A students and recent alumni interested in applying for scholarships and fellowships such as the NSF Graduate Research Fellowship should contact the Office of Nationally Competitive Awards at awards@uark.edu or 479-575-3771. More information is available at awards.uark.edu.

About the University of Arkansas: The U of A provides an internationally competitive education for undergraduate and graduate students in more than 200 academic programs. The university contributes new knowledge, economic development, basic and applied research, and creative activity while also providing service to academic and professional disciplines. The Carnegie Foundation classifies the U of A among only 2 percent of universities in America that have the highest level of research activity. U.S. News & World Report ranks the U of A among its top American public research universities. Founded in 1871, the U of A comprises 10 colleges and schools and maintains a low student-to-faculty ratio that promotes personal attention and close mentoring.