U of A Faculty Members Honored as Leaders in Nursing 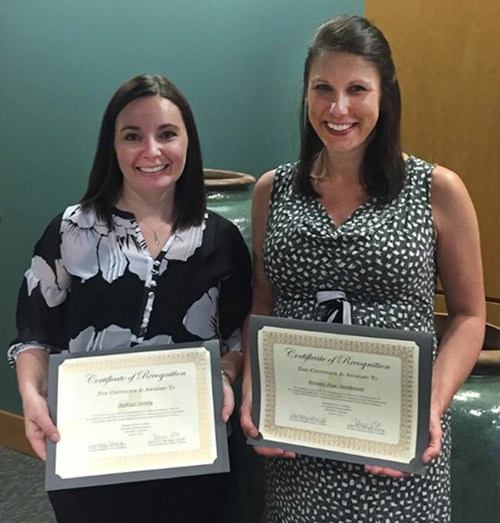 Jacklyn Gentry, left, and Kristin Jaye Henderson were honored June 5 at a banquet at Arkansas Children's Hospital in Little Rock.

Jacklyn Gentry and Kristin Jaye Henderson, University of Arkansas nursing faculty members, were honored earlier this month by the Arkansas Action Coalition, which included them in a list of nursing leaders in Arkansas.

Gentry, assistant director of the Eleanor Mann School of Nursing, and Henderson, clinical instructor of nursing, were named to the coalition's inaugural "40 Under 40" list. The list honors emerging nurse leaders who are under the age of 40.

The 40 honorees include nurses at health systems, nursing schools and school districts across the state, chosen based on criteria that included leadership, service and contributions to the profession.

The Arkansas Action Coalition includes representatives of state health-care providers, consumer advocates, and policymakers as well as business and academic leaders. It was formed to promote recommendations made in a landmark Institute on Medicine report on the future of nursing. Identifying future nursing leaders was one of the report's recommendations and a driving force behind creation of the "40 Under 40" recognition program.

Gentry has been a practicing registered nurse since 2002 with a primary focus on critical care nursing and clinical research. She conducts clinical research trials in cardiology at Mercy Hospital Northwest Arkansas in Rogers and is pursuing a doctoral degree.