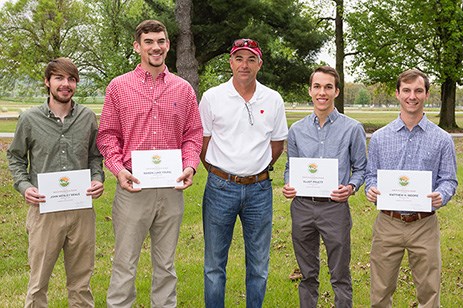 Chuck Farr (center), a 1987 agronomy graduate of the U of A, awards Arkansas Agricultural Consultants Association scholarships to (from left) J.W. Seale of Marion, Mason Young of Jonesboro, Elliot Pruett of Summers and Matt Moore of Marion.

FAYETTEVILLE, Ark. – Several privately funded scholarships in the Dale Bumpers College of Agricultural, Food and Life Sciences’ Department of Crop, Soil, and Environmental Sciences at the University of Arkansas were recently awarded, including the Lyell and Marcella J. Thompson Endowed Scholarship to promote diversity.

Kamela Mitchell, a senior from Little Rock, and Sophia Sundara, a junior from Springdale, were awarded the Thompson scholarship, which was established in 2010.

The Lyell and Marcella J. Thompson Endowed Scholarship was established in memory of Lyell Thompson, who taught agronomy in Bumpers College from 1958 to 1991. His research in soil fertility focused on trace element nutrition and led to boron, molybdenum and zinc recommendations for Arkansas crops. Thompson, who was active in the Civil Rights movement and served on the Arkansas Council on Human Relations, passed away March 10, 2014.

Legg, who passed away in 2014, earned a bachelor’s degree in 1950 and his master’s in 1951 in agronomy at the U of A. As an agricultural research service soil scientist, he established a new line of research using the stable isotope N-15 as a tracer to study nitrogen transformations in soil-plant relationships. After retiring, the Leggs moved to Rogers and he became an adjunct faculty member for the department.

The Jacob Coleman Memorial Endowed Scholarship was awarded to Quentin Nichols of Gideon, Missouri. The Coleman scholarship is named for Coleman, a Bumpers College student who died in a car accident in 2010.

In addition, Chuck Farr, who earned his bachelor’s in agronomy from the U of A in 1987, recently awarded Arkansas Agricultural Consultants Association scholarships. The high school senior AACA scholarship recipient is Tanner Bratton of Marion. Crop, Soil, and Environmental Sciences Department recipients are Mason Young of Jonesboro, Elliot Pruett of Summers and Matthew Moore and John Wesley Seale, both of Marion.

The AACA is an organization of licensed agricultural consultants who promote research, assist producers in the production of crops by the most economical means and promote improved environmental practices.