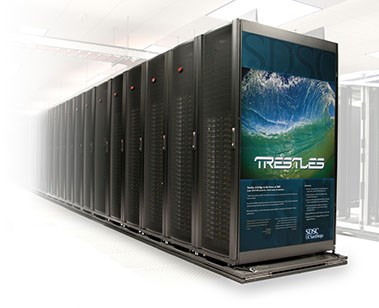 Trestles was deployed at the San Diego Supercomputer Center at the University of California, San Diego, with a $2.8 million National Science Foundation grant.

FAYETTEVILLE, Ark. – A workhorse of a supercomputer is coming to the University of Arkansas.

The National Science Foundation and the San Diego Supercomputer Center at the University of California, San Diego, have agreed to transfer ownership of the computer cluster known as “Trestles” to the Arkansas High Performance Computing Center.

Once installed, the new supercomputer will more than double the center’s computational capacity and allow it to run three times the amount of jobs for campus researchers, said David Chaffin and Jeff Pummill, interim co-directors of the center.

“We are thrilled to acquire a prominent national resource for high performance computing,” Pummill said. “Researchers at the University of Arkansas are in a perpetual state of evolution and advancement in their computational needs, and Trestles is known throughout the national high-performance computing community as a ‘high-productivity workhorse.’”

The Arkansas High Performance Computing Center, founded in 2008, supports research for about 260 users in about 30 academic areas across the campus, including bioinformatics, physics, integrated nanoscience, computational chemistry, computational biomagnetics, materials science and spatial science, among others.

“Trestles will provide much-needed infrastructure for solving tasks such as genome assembly and other data-intensive problems,” Pummill said.

Trestles has 256 servers, 16.4 terabytes of memory and a processing speed of 79 teraflops. A teraflop is the measurement of 1 trillion calculations per second, with the “tera” meaning trillion and the “flop” standing for “floating-point operations” per second.

While a typical desktop computer has four processing cores, Trestles has 8,192.

By comparison, the U of A’s flagship supercomputer, dubbed Razor, has a processing speed of 77 teraflops from its 4,328 processing cores.

“High-performance computing plays a pivotal role in supporting vital research at the University of Arkansas,” said Jim Rankin, vice provost for research and economic development. “The addition of Trestles enhances our goal of becoming one of the top 50 public research universities in the United States.”

In 2010, the National Science Foundation awarded $2.8 million to the University of California, San Diego to deploy Trestles. Since it went online, the supercomputer has been recognized as the leading science gateway platform in NSF’s eXtreme Digital Network, a collaborative set of computer and storage resources across the United States that scientists can use for advanced computational and data-enabled research.

Richard Moore, deputy director of the San Diego Supercomputer Center and the principal investigator for Trestles, said, “During its four-year run at SDSC, Trestles successfully supported thousands of national researchers with modest-scale applications as well as science gateways, with shorter turnaround times than has been typical for most HPC systems. It’s terrific that this resource can be re-deployed to advance scientific research at the University of Arkansas.”