U of A Professor Talks Nova, Petra at Upcoming Screening of 'Petra: Lost City of Stone' 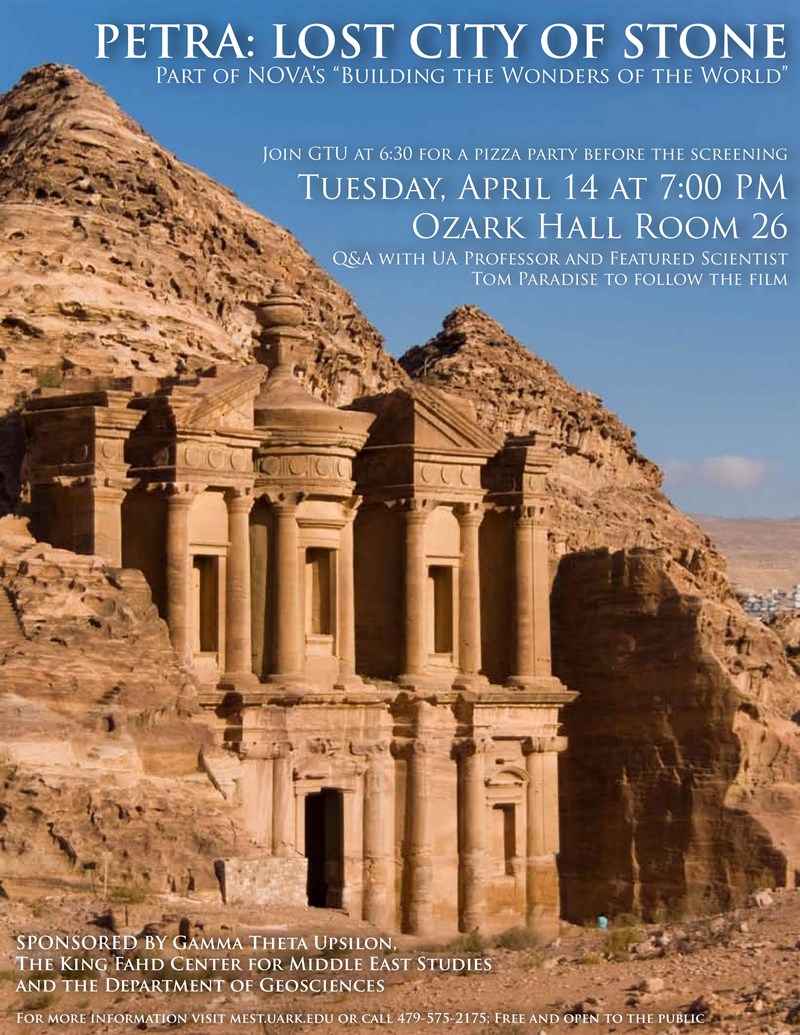 The Gamma Kappa chapter of geography honors society Gamma Theta Upsilon will host a screening of Petra: Lost City of Stone, a NOVA special featuring U of A professor Tom Paradise, in conjunction with the King Fahd Center for Middle East Studies and the Department of Geosciences. The event will take place at 7 p.m. Tuesday, April 14, in Ozark Hall Room 26. Pizza and beverages will be served at 6:30 p.m., prior to the screening. This event is free and open to the public.

Paradise, professor of geosciences and King Fahd Center faculty member, was part of a team that worked with carvers and masons to sculpt a full-scale tomb into a cliff face to discover how the ancient Nabateans built Petra, the rock-carved city in Jordan made famous by Indiana Jones and the Last Crusade, and will take part in a question and answer session after the screening.

Petra is featured along with the Roman Colosseum in Rome, Italy, and Hagia Sophia in Istanbul, Turkey, in Building the Wonders of the World, a three-part series that first aired in February 2015 on PBS. More than 2,000 years ago, the thriving city of Petra rose up in the bone-dry desert of what is now Jordan. An oasis of culture and abundance, the city was built by wealthy merchants whose camel caravans transported incense and spices across hundreds of miles from the Arabian Gulf. They carved spectacular templetombs into its soaring cliffs, raised a monumental Great Temple at its heart, and devised an ingenious system that channeled water to vineyards, bathhouses, fountains, and pools. But following a catastrophic earthquake and a slump in its desert trade routes, Petra's unique culture faded and was lost to most of the world for nearly a thousand years. Now, in a daring experiment, an archaeologist and sculptors team up to carve an iconic temple-tomb to find out how the ancient people of Petra built their city of stone.