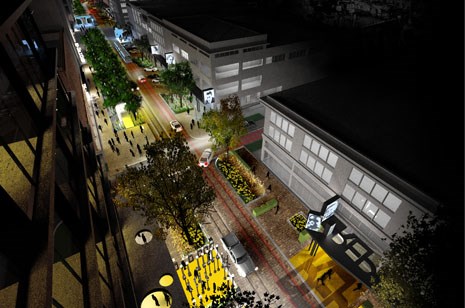 FAYETTEVILLE, Ark. – A plan to transform four neglected blocks of Main Street in downtown Little Rock into an arts district has won a 2014 Honor Award from the American Society of Landscape Architects. Faculty and staff members of the Fay Jones School of Architecture at the University of Arkansas designed this award-winning work.

The Creative Corridor, designed by the University of Arkansas Community Design Center and Marlon Blackwell Architect won an Honor Award for Analysis and Planning, one of five awarded. This is the design center’s sixth ASLA award and the fifth that they have received in this category.

The Creative Corridor plan retrofits a four-block segment of Main Street, between third and seventh streets, by using economic development catalyzed by the cultural arts rather than a traditional retail base. The goal is to structure an identity for the Creative Corridor rooted in a mixed-use, work-live environment that is also sensitive to the historical context of Main Street in Little Rock, which has a metropolitan area population of about 700,000.

The work will be featured in the October issue of Landscape Architecture Magazine, and celebrated and exhibited at the 2014 ASLA Annual Meeting and Expo in Denver in November.

An increasing number of public, private and non-profit groups have already invested in Main Street in recent years, including developers Scott Reed and Moses Tucker Real Estate, and that trend is continuing. Orbea, a Spanish bicycle manufacturer, relocated its North American headquarters to Main Street; the Arkansas Venture Center soon will open on the same block; and the Little Rock Technology Park Authority Board recently voted to build the park downtown along Main Street. Arts and culture mainstays like Arkansas Symphony Orchestra, Ballet Arkansas and Arkansas Repertory Theatre will occupy rehearsal and creative space alongside Kent Walker Artisan Cheese and artist Matt McLeod. Residential installations and dining, along with several other projects, will round out the live/work/play concept that surrounds the Creative Corridor.

“The list of investments rolling in from the private sector is impressive as construction commences on the Creative Corridor,” said Steve Luoni, director of the Community Design Center. “It’s instructive to see the power of public sector leadership in catalyzing urban revitalization simply by establishing a coherent vision. The project is attracting attention from multiple agencies in Washington, D.C., looking for public-private success stories.”

Planning and design for the Creative Corridor was funded by a 2011 Our Town grant from the National Endowment for the Arts. Construction on the first phase began over summer and should be completed early next year.

The Creative Corridor also has received other honors, including a 2014 Honor Award for Regional and Urban Design from the American Institute of Architects and a 2013 American Architecture Award from The Chicago Athenaeum: Museum of Architecture and Design and The European Centre for Architecture Art Design and Urban Studies. It also won a Charter Award in the Neighborhood, District and Corridor category in the 2013 Charter Awards, sponsored by the Congress for the New Urbanism, and it was short-listed for the 2013 World Architecture Festival Awards in the Future Projects – Masterplanning category.

The University of Arkansas Community Design Center was founded in 1995 as part of the Fay Jones School of Architecture. The center advances creative development in Arkansas through education, research and design solutions that enhance the physical environment. It has provided design and planning services to more than 45 communities and organizations across Arkansas, helping them to secure nearly $65 million in grant funding to enact suggested improvements.

In addition to revitalizing historic downtowns, the center addresses new challenges in affordable housing, urban sprawl, environmental planning, and management of regional growth or decline. The center’s professional staff members are nationally recognized for their expertise in urban and public-interest design, and their work has received more than 100 design awards.