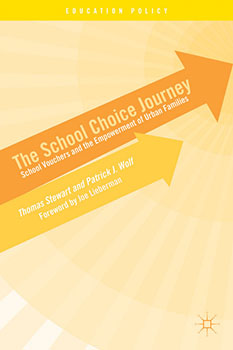 FAYETTEVILLE, Ark. – A University of Arkansas researcher’s new book describes the experiences of urban families who were offered government-funded vouchers to send their children to private schools.

Patrick J. Wolf, Distinguished Professor of education policy, co-wrote The School Choice Journey: School Vouchers and the Empowerment of Urban Families, published this month by Palgrave Macmillan. Thomas Stewart, president of Patten University in Oakland, California, is Wolf’s co-author of the book about a school voucher program in Washington, D.C. The book draws on research the two men have conducted over the past 10 years.

The District of Columbia Opportunity Scholarship Program is the first federally funded voucher program in the United States, providing scholarships of up to $7,500 for low-income Washington, D.C., residents to send their children to local participating private schools.

President George W. Bush signed legislation launching the program in 2004, but it ran into trouble when President Barack Obama cut funding for it in 2009. In 2011, after several rallies and marches by families in the voucher program, House Speaker John Boehner, R-Ohio, and Sen. Joe Lieberman, I-Connecticut, won approval for legislation that restored funding for the program through 2016. Lieberman wrote the forward for the book.

“We conducted focus groups and interviews with parents and students who received the vouchers to get an inside view of this highly controversial program,” Wolf said. “We documented the challenges these families faced. Their journey culminated in a surprising, courageous and ultimately successful fight to renew the program.”

The stories of these families, often recounted in their own words, shed important new light on the significance of parental school choice within the broader context of urban poverty and education reform in the United States, Wolf said. Many parents moved from being passive recipients of government support to informed education consumers and, ultimately, to citizen-activists, he said.

Rod Paige, former U.S. secretary of education, called the book a must-read for anyone interested in improving academic outcomes for urban children.

“The School Choice Journey illuminates how well-crafted policies and practices can help urban families secure valuable education opportunities for their children,” Paige said in a review of the book.

The qualitative research that informed The School Choice Journey initially was intended to supplement the qualitative evaluation but took on a life of its own once the pilot program encountered political headwinds, Wolf said.