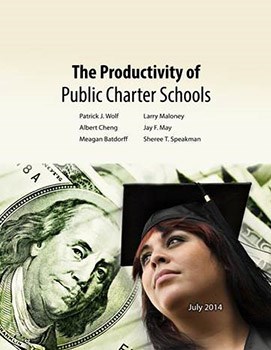 FAYETTEVILLE, Ark. – A first-ever report released July 22 by the University of Arkansas, which ties charter school funding to achievement, finds that public charter schools are more productive than traditional public schools in all 28 states included in analyses of cost-effectiveness and return on investment.

The national report, titled “The Productivity of Public Charter Schools,” found that charter schools deliver on average an additional 17 points in math and 16 points in reading on the National Assessment of Educational Progress exam taken by students for every $1,000 invested. These differences amount to charter schools being 40 percent more cost-effective in math and 41 percent more cost-effective in reading, compared to traditional public schools.

“Across all states, we found charter schools to be more cost-effective than their traditional public school counterparts for one of two reasons: they either generate higher student achievement at a lower cost or they generate equal to slightly lower student achievement at a much lower cost,” said Patrick J. Wolf, Distinguished Professor and holder of the Twenty-First Century Chair in School Choice at the University of Arkansas. “Now that we know how well schools are using the public funds they receive, it would be fascinating to see what charters could accomplish if they had close to equitable funding.”

The report focuses on revenue coming into schools and not expenditures so the researchers can’t say for sure where the additional funds are being spent in traditional public schools.

Based on findings and methodology from researchers at Stanford University, ROI compares two similar students, one attending a charter school and the other attending a traditional public school. ROI calculations then factor in dollars invested in a school, academic achievement and projected lifetime earnings – to see which school type “pays off” over time in terms of the economic benefits from increased learning.

“This study is path breaking and is likely to spearhead a new and important policy debate,” said Eric Hanushek, Senior Fellow at the Hoover Institution at Stanford University, who reviewed the report’s methodology and key findings. “Until the 2008 recession, schools largely acted as if they were immune from considering finances and returns on expenditures, but we now know that this is no longer possible. This timely study invites a more rational discussion of policy choices, not just with respect to charter schools, but also in a wider context.”

This research builds on the recent report titled, “Charter Funding: Inequity Expands,” released by the same team of researchers in April. That analysis found that public charter schools receive on average $3,814 less per pupil in revenue than traditional public schools. Student achievement was assessed using 2011 data from the National Assessment of Educational Progress and the Center for Research on Education Outcomes at Stanford University, and controlled for student characteristics including poverty, prior achievement and special education status in both analyses. Of the 28 states included in the productivity analyses, 22 states had data allowing comparison for cost-effectiveness and 21 states for ROI.