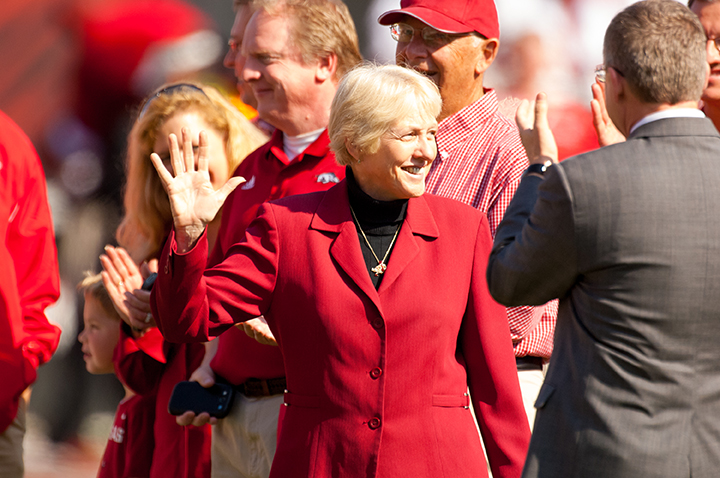 FAYETTEVILLE, Ark. – After serving the University of Arkansas as a coach and an administrator for more than three decades, Bev Lewis has announced she will retire on June 30, 2014. The former director of Women’s Athletics and current associate vice chancellor and executive associate athletic director, Lewis has been at the forefront of creating opportunities for all Razorback student-athletes, especially those competing in women’s sports.

“I came to the University of Arkansas as a young energetic first-time head coach with lots of visions for my future in intercollegiate athletics,” Lewis said. “Who would have guessed that I would spend my entire career as a Razorback? What a wonderful career I have had to be a part of the remarkable growth of women’s sports in the 1990s, to work through the transition to the Southeastern Conference and to play a role in the overall development of our athletic department. Professionally it has been very rewarding to work in a capacity ranging from building fantastic facilities to the opportunity to work with great coaches, staff and student-athletes.

“My time as a Razorback is so special. I have worked with so many great people, watched our students excel both in the classroom and on the athletic field, and I have built lasting relationships with friends, fans and athletic professionals. I will always treasure the opportunity to help coaches and student-athletes achieve their dreams and I will always be a Razorback. My husband, Harley retired three years ago, and I am looking forward to spending time with him at our home on the White River near Mountain Home and summers in Michigan where I grew up.”

“For more than 30 years, Bev Lewis has made a meaningful difference in the lives of thousands of student-athletes and helped shape the success of Razorback Athletics,” said Jeff Long, vice chancellor and director of athletics. “As a coach and an athletics administrator, Bev has continued to be a leading advocate for expanding opportunities and enhancing the student-athlete experience. As the’ longtime director of Women’s Athletics, she was instrumental in the growth and success of women’s sports not only at our institution but throughout the country.

“She also played a pivotal role in helping combine the previously independent men’s and women’s athletic departments into a successful unified program serving more than 460 student-athletes in 19 sports. We are extremely grateful for her many contributions to Razorback Athletics and the University of Arkansas. We all look forward to working with her in the final few months of her remarkable career and wish her the very best in her upcoming retirement.”

Lewis spent 19 years (1989-2007) as the director of Women's Athletics. The hallmark of that stint was the overall excellence of the entire women’s athletics program. During her tenure, the University of Arkansas has moved to increase athletic participation for women with the addition of volleyball, golf, gymnastics and softball. All four sports competed in NCAA post-season competition by each inaugural recruiting class’ senior season and have established themselves as nationally competitive programs. Every Razorback women’s sport achieved a new athletic performance pinnacle under her leadership.

As a result of her strong emphasis on the classroom, Razorback female student-athletes received numerous academic honors including national academic All-American of the year, team academic national titles and the university's first two SEC/H. Boyd McWhorter Scholar-Athletes of the Year.

Her leadership was also a part of the success of the university's Campaign for the Twenty-First Century. Lewis directed Women's Athletics to over $11.5 million in direct support for women's teams including gifts for facilities like the Huntley Gymnastics Training Facility and Sutton Strength and Conditioning Center as well as more than tripling the number of named and endowed scholarships for female student-athletes.

During the campaign, Lewis received one of her greatest personal honors as Bob and Marilyn Bogle requested that Arkansas' new facility be named the Bev Lewis Center for Women's Athletics. Lewis’ leadership was also key to the construction of Bogle Park and Razorback Field, the home to Razorback softball and Razorback soccer, respectively.

Lewis served collegiate athletics at the highest level as an administrator, as a member of the NCAA Management Council, the NCAA Championship Cabinet and the Southeastern Conference Executive Committee.

Lewis helped bring national attention to Arkansas by hosting numerous SEC Championships as well as the 1994 NCAA Women’s Basketball Mideast Regional, the 1994 NCAA Division I Cross Country Championship and the 2006 NCAA Gymnastics Regional. As a former track coach, Lewis was instrumental in the University’s hosting of the NCAA Men’s and Women’s Indoor Track and Field Championships at the Randal Tyson Track Center 12 times during her tenure at Arkansas. In addition, Lewis assisted in attracting the SEC Women’s Basketball Tournament and SEC Gymnastics Championship to Central Arkansas.

In 1998, she was voted into the University of Arkansas Hall of Honor for her contributions as a coach and administrator. In recognition of her outstanding achievements, Lewis was named to Arkansas Business magazine’s “Top 100 Women in Arkansas” in 1996, 1997 and 1998. The publication also named her to their 2010 “Women of Influence” in Arkansas. Lewis was a member of the “40 Under 40,” which highlighted the achievements of business leaders in Arkansas who were under 40 years old during those same years

Prior to assuming the duties of athletic director, Lewis’ Razorback women’s cross country and track teams had six top 20 national finishes, and she coached Team USA at the 1990 World Junior Cross Country Championships. Her Arkansas coaching milestones were numerous. Under her direction, cross country achieved three notable Lady Razorback firsts. On Oct. 4, 1984, her cross country team became the first women’s team to achieve a national ranking. She added the first top 10 finish to her resume in 1986 as cross country finished 10th at the NCAA Championships and backed it up with a ninth-place finish in 1987. Her coaching was instrumental in establishing Arkansas’ perfect record of sending a team or individual to every collegiate national meet since the program’s inception.

Lewis also coached Arkansas’ first women’s conference championship team at the 1988 Southwest Conference Cross Country Championships. As a result, her peers voted her SWC Coach of the Year for the second year in a row. She also was named SWC Outdoor Track Coach of the Year in 1989.

Lewis earned her bachelor's degree from Central Michigan in 1979 and followed it with her master's degree from Purdue prior to her arrival at Arkansas in 1981.