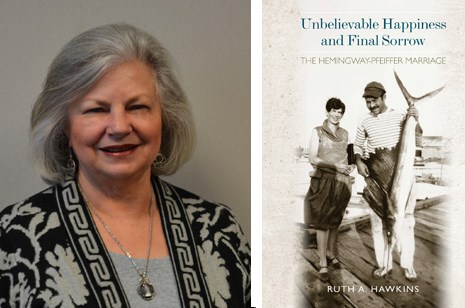 FAYETTEVILLE, Ark. – The University of Arkansas Press has published Unbelievable Happiness and Final Sorrow: The Hemingway-Pfeiffer Marriage ($34.95 cloth), by Ruth A. Hawkins. The biography covers Pauline Pfeiffer’s life and specifically her marriage to Ernest Hemingway, which lasted from 1927 to 1940.

Pfeiffer and Hemingway met in the glittering intellectual world of 1920s Paris expatriates. Pfeiffer was a writer for Vogue, and she was part of a circle of friends that included not only Hemingway and his wife Hadley but also writers Gertrude Stein, F. Scott Fitzgerald, John Dos Passos and Dorothy Parker. Pauline grew close to Hadley but eventually forged a stronger bond with Hemingway himself; with her stylish looks and dedication to Hemingway’s writing, Pfeiffer became the source of “unbelievable happiness” for Hemingway and, by 1927, his second wife.

Pfeiffer was her husband’s best editor and critic, and her wealthy family provided moral and financial support, including the conversion of an old barn to a dedicated writing studio at the family home in Piggott, Ark. The marriage covered some of Hemingway’s most productive years, and the couple had two children. But the “unbelievable happiness” met with “final sorrow,” as Hemingway wrote, and Pauline would be the second of Hemingway’s four wives.

Publishers Weekly called Unbelievable Happiness and Final Sorrow a “signficant contribution.” Paul Hendrickson, author of Hemingway’s Boat, said, “No one in America knows more about the Pfeiffer family and the crucial Hemingway-Pfeiffer marriage than Ruth A. Hawkins. The book she offers represents years of close scholarship and is told with respect, literary grace, and blunt honesty.”

Hawkins has been an administrator at Arkansas State University in Jonesboro for more than 30 years and established its Arkansas Heritage Sites program, which includes the Hemingway-Pfeiffer Museum and Educational Center in Piggott. She has been recognized at the state, regional and national level for her work in historic preservation and heritage tourism. Hawkins will be reading and signing Unbelievable Happiness and Final Sorrow at the Hemingway-Pfeiffer Museum and Education Center in Piggott on June 7; McLean & Eakin Booksellers in Petoskey, Mich., on June 21; the Butler Center Legacies and Lunch in Little Rock on July 11; the Ernest Hemingway Home and Museum in Key West, Fla., on July 17; the Cooper Alumni Center at Arkansas State University in Jonesboro on Aug. 28; and at That Bookstore in Blytheville, Ark., on Sept. 9. The events are free and open to the public.