Bridge to War Eagle: Stories of a Wild Stream 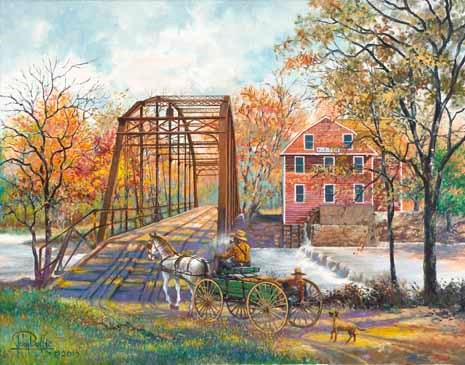 The bridge and mill at War Eagle. Painting by John Bell, used in film

The Emmy-winning team of Larry Foley and Dale Carpenter have created a collection of poignant stories framed by the old steel bridge and iconic grist mill on War Eagle Creek in the Ozark Hills. Their new documentary film, Bridge to War Eagle, will premier March 10 at 7 p.m. at the Fayetteville Public Library. Another screening is set for March 17 at 7 p.m. at the Fort Smith Public Library, and at Hobbs State Park-Natural Area at 2 p.m. on April 2. DVDs are available through the University of Arkansas Press.

The documentary is a 30-minute film about a wild stream, protected only by the folks who use it, and illustrated by the stories of those who love it. The narrator is country music star Joe Nichols of Rogers, who’s been coming to the War Eagle his entire life.

Music professor James Greeson composed an original musical score; assistant professor of art Tom Hapgood created the graphics and animation; and Trey Marley of the David and Barbara Pryor Center for Oral and Visual History was the aerial photographer.

The film begins as Fort Smith artist John Bell starts a new painting he calls “the War Eagle Bridge,” which is revealed at the conclusion. The painting is set back in time around 1907 when the bridge was built, leading to a mill that is actually the fourth that stands on the original foundation.

The name of the creek comes from a legend told to early land surveyors about a young Cherokee man named War Eagle, killed while trying to rescue the woman he loved from a drunken, kidnapping trapper who had stolen the maiden away, deep in the Ozark wilderness.

War Eagle Creek falls off the top of an Ozark Mountain — the same hilltop source that feeds the White, Kings and Buffalo Rivers, and Big Piney and Mulberry Creeks. The 59-mile flow is never dry, and changes through four seasons. The headwaters form in the hardwoods of the Ozark National Forest before streaming into pasture land, and bending northwest between tall rocky bluff lines.  Eventually, the creek spills into Beaver Lake, the water supply for Northwest Arkansas cities and towns.

Because communities and landowners have minimal restrictions on how they use the War Eagle, or what can seep into the water from their property, people downstream are dependent on the thoughtful protection of those living upstream.

Long endangered, the quaint single-lane bridge along county road 98 got an expensive facelift at the start of the second decade of the 21st century. While the steel gateway has been preserved for another 50 years, the character has not been changed, and the wooden planks open to the same views below as they have for more than a century.

Profiles in “Bridge to War Eagle” include Texas wildlife biologist Rufus Stephens, who’s been coming to the area to stay in his family’s cabin all his life. He says this is where he feels most at peace — on a creek where his dad taught him to be a fly fisherman.

Rufus brought his only child, “Ruf Junior,” to the creek from the time he was born, and just like dad, the boy developed a passion for the natural world. Tragically, Ruf was killed in Texas while about to begin his own conservation career.

Today, when Rufus returns to the Creek, he carries memories of his son and his father at their own very special place.

Robert Swain lives and works near a towering bluff known as “Big Eddy,” where he designs and produces guitar picks for music stars like Merle Haggard and Willie Nelson. Robert is the winner of a War Eagle Steward Award for his efforts to conserve and protect the creek.

Retired school teacher Ron Duncan, an Arkansas Game and Fish commissioner, has floated and fished every mile of the creek. Inspired by his affection for the War Eagle, he created a junior high civics project back in the 1980s that grew into the national “Hooked on Fishing” program.

Funding for Bridge to War Eagle was made possible by Jim Lindsey of The Lindsey Company; Audubon Arkansas, through the William Rufus Stephens, Junior Memorial Fund; Beaver Water District; the Arkansas Game and Fish Commission; and the Arkansas Department of Parks and Tourism.

More about the film and region is available at the Bridge to War Eagle website.