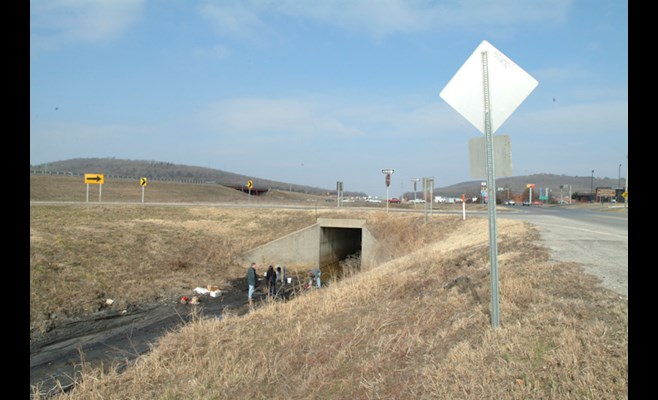 The nautiloid fossil was found in a highway drainage ditch. 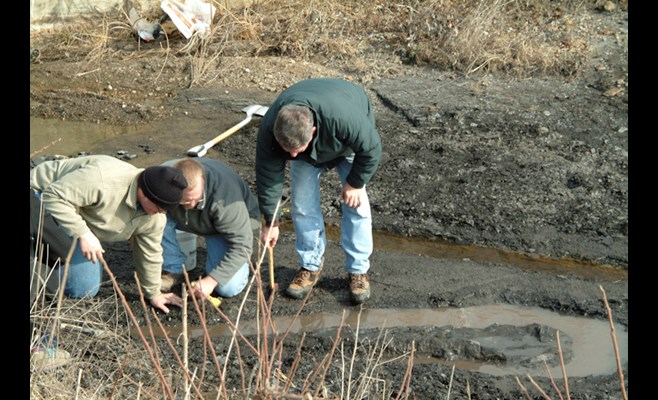 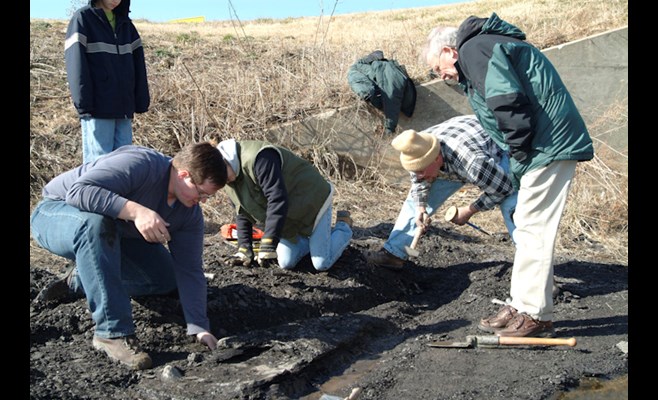 More hands join the excavation of the fossil. 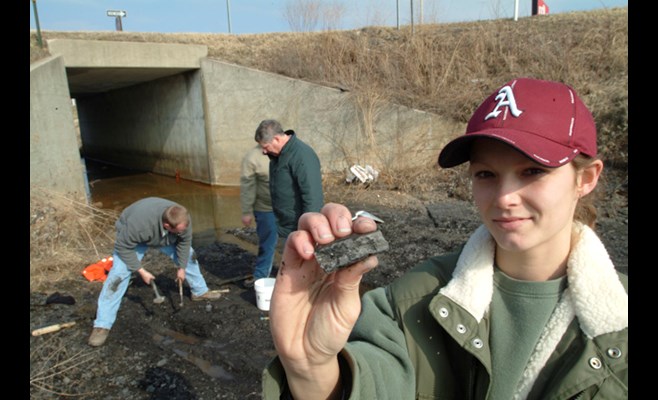 Sarah Kee holds up a small piece of the nautiloid fossil. 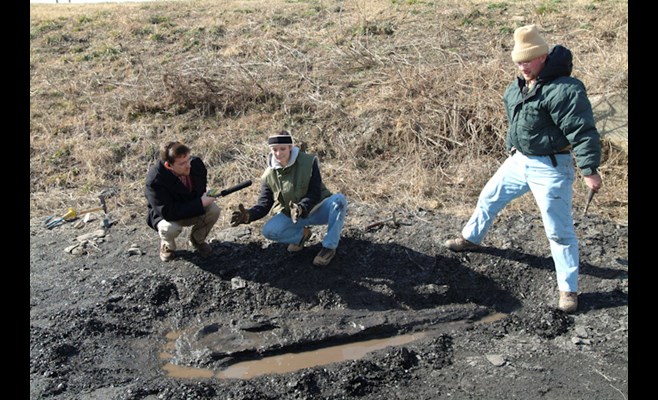 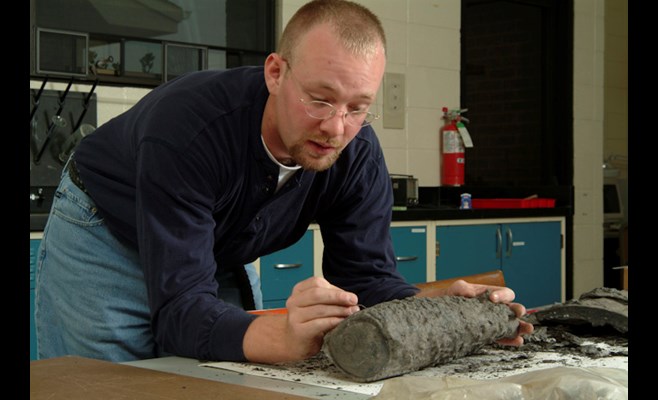 Kevin Morgan, a senior, cleans part of the nautiloid fossil 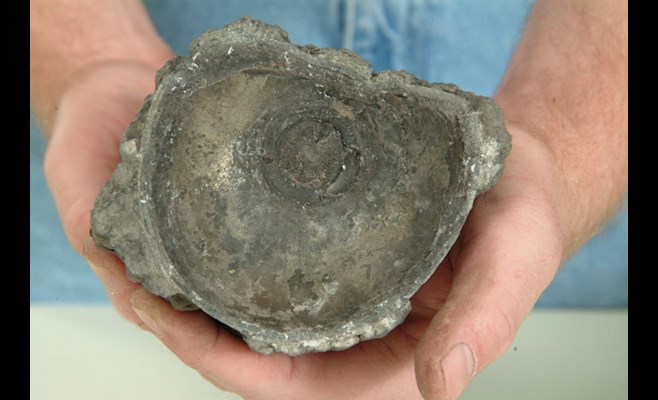 A cross-section of the nautiloid fossil 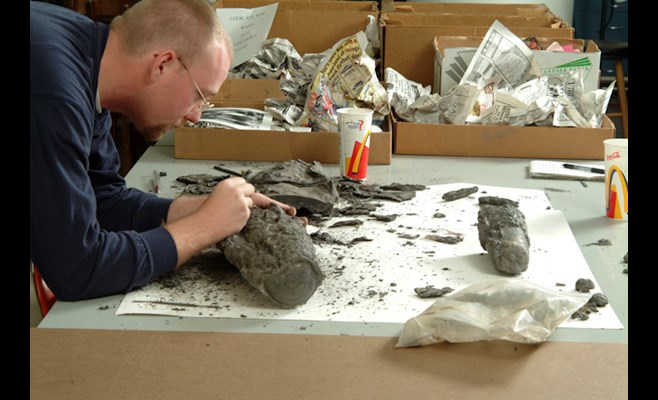 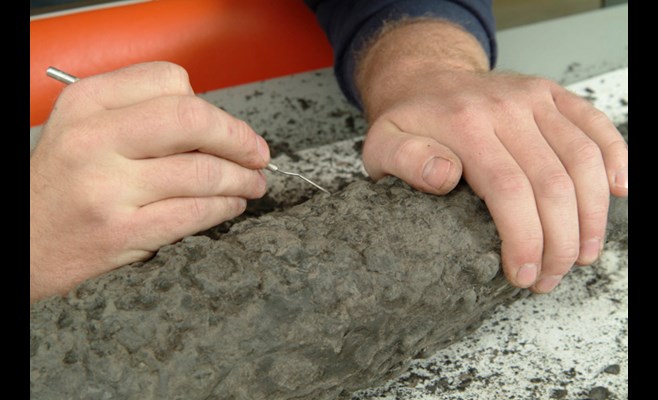 Cleaning of the fossil reveals a reticulated surface. 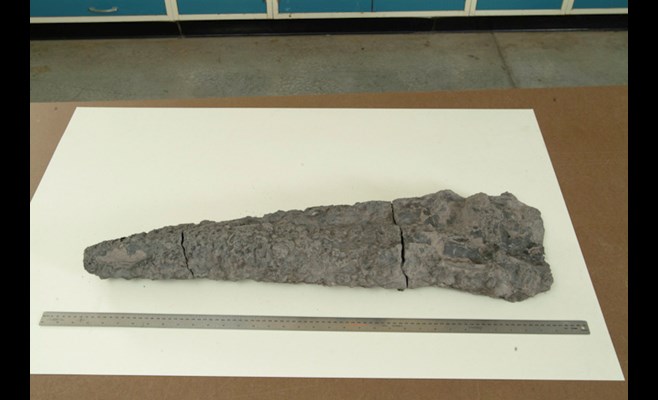 A three-foot section of the eight-foot-long fossil 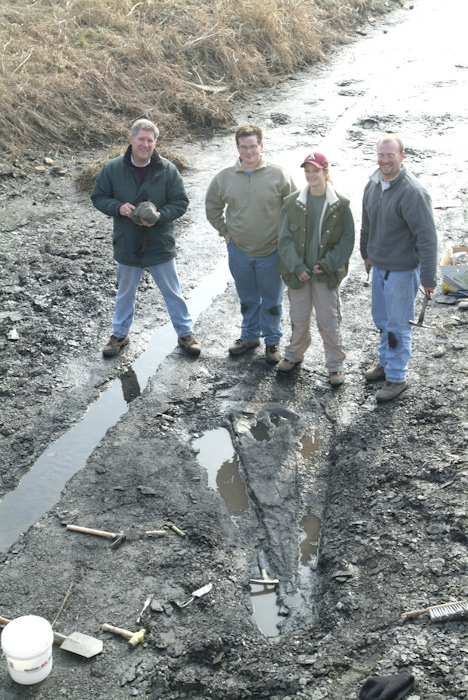 FAYETTEVILLE, Ark. – Three undergraduate students from the University of Arkansas made a world-class discovery this week when they uncovered a 325-million-year-old nautiloid fossil just yards from two of Fayetteville’s busiest roads. At exactly eight feet in length, their find represents the longest actinoceratoid nautiloid fossil in the world.

On Jan. 20, while the University community observed the Martin Luther King Jr. holiday, freshman geology major Sarah Kee and senior Kevin Morgan set out to hunt for fossils. Their excursion led them to a culvert near Interstate 540, where dime-sized ammonoid fossils were known to be abundant.

"We were actually looking for a three-foot nautiloid that was supposedly located there. Kevin was digging. I wandered a few feet off and started digging for ammonoids, and that’s when I noticed the calcite," Kee said. Calling Morgan over, the pair began to dig, and dig and dig and dig.

"It just kept going and going, and that’s when we called Jonathan because we knew we’d need more help," Kee said.

Junior Jonathan Gillip arrived at the site, and the trio hammered, chiseled and chopped their way through the splintery, black shale for the rest of the afternoon. When the unusual size of the fossil became undeniable, they phoned their advisor, geology professor Walter Manger.

"I was skeptical until I got down there to see it for myself. But these students knew exactly what they had," Manger said. "It may have been luck that brought them to it, but knowledge took over from there. They recognized what they’d found and were very conscientious about the excavation."

Manger’s initial skepticism can be understood, considering the fact that only one other comparable nautiloid fossil is known to exist. Not coincidentally, that specimen was also discovered in Fayetteville in 1963 by University of Arkansas students and geology professor Doy Zachry. Measuring seven feet, two inches, the 1963 fossil was believed to be the largest in existence until Monday’s discovery.

Belonging to the extinct species Rayonnoceras solidiforme, both fossil specimens would have lived during the Mississippian era, when much of the southern United States lay submerged beneath a shallow sea. A type of cephalopod related to the modern-day squid, these organisms normally grew no more than three to four feet in length.

The specimen uncovered by Kee, Morgan and Gillip represents what Manger calls a pathological giant. Its discovery lends credence to a theory that Manger first proposed to the scientific community in 1999 - that these nautiloids exhibited semalparous reproductive behavior. Like modern-day squid, these creatures would have mated and laid eggs within three to four years and then died.

Manger suggests that the giant specimens may have been rendered reproductively sterile by parasitic trematodes. Unable to reproduce, they could have lived for decades, diverting their energy to growth.

"The new fossil will definitely bolster that theory. When you only have one example to go on, you wonder. But the students have given us another example that fits perfectly with the hypothesis," Manger said.

The similarity of the two giant fossils provides evidence about the reproductive patterns of these prehistoric creatures, but their differences may prove even more enlightening. In modern nautiloids, males and females show a difference in the diameter of their apertures - the open end of the shell, where the organisms reside. According to Manger, the fossil giants show similar signs of sexual dimorphism.

"They’re within a foot of the same length, but the aperture on the 1963 fossil is a third again as wide," Manger said. "We think we’ve just found a female."

Sexing prehistoric organisms can be difficult because fossils are rarely found whole. The specimen that Kee, Morgan and Gillip discovered is remarkably well-preserved, offering essential information about the creature’s physical features and proportions. The tapering thickness of the shell suggests that the fossil is complete up to the final growth stage of the organism.

"That’s unbelievably rare. Usually you don’t see the tapering because that portion of the shell has been destroyed," Manger said.

In fact, Manger indicates that the discovery was as lucky for the fossil as it was for the students. Located less than an inch below the surface of the shale, the fossil could have been damaged or destroyed by the next hard rain.

"If they hadn’t stumbled onto this right when they did and started working to get it out, all that fragile material could have been lost. It was beginning to crumble at the front already, and one good wash down that gully would have carried it away. You’d have never realized it all went together," he said.

Against all odds, the only portion missing from the fossil is the thicker, pointed end of its shell. That’s no accident of excavation or result of erosion, Manger states. The fossil discovered in 1963 also exhibited a broken end. Manger believes the damage occurred while the organisms were still living - the effect of parasitic organisms that could have bored through the shell. As he and the students begin to examine the fossil, they will look for evidence to support that theory.

Lifted from the culvert where it had rested for 325 million years, the giant nautiloid has been relocated to the University Museum. Manger believes the students will choose to use the fossil as the subject of their undergraduate honors theses.

"Last semester I was an accounting major," Kee said. "I think I made a good switch."