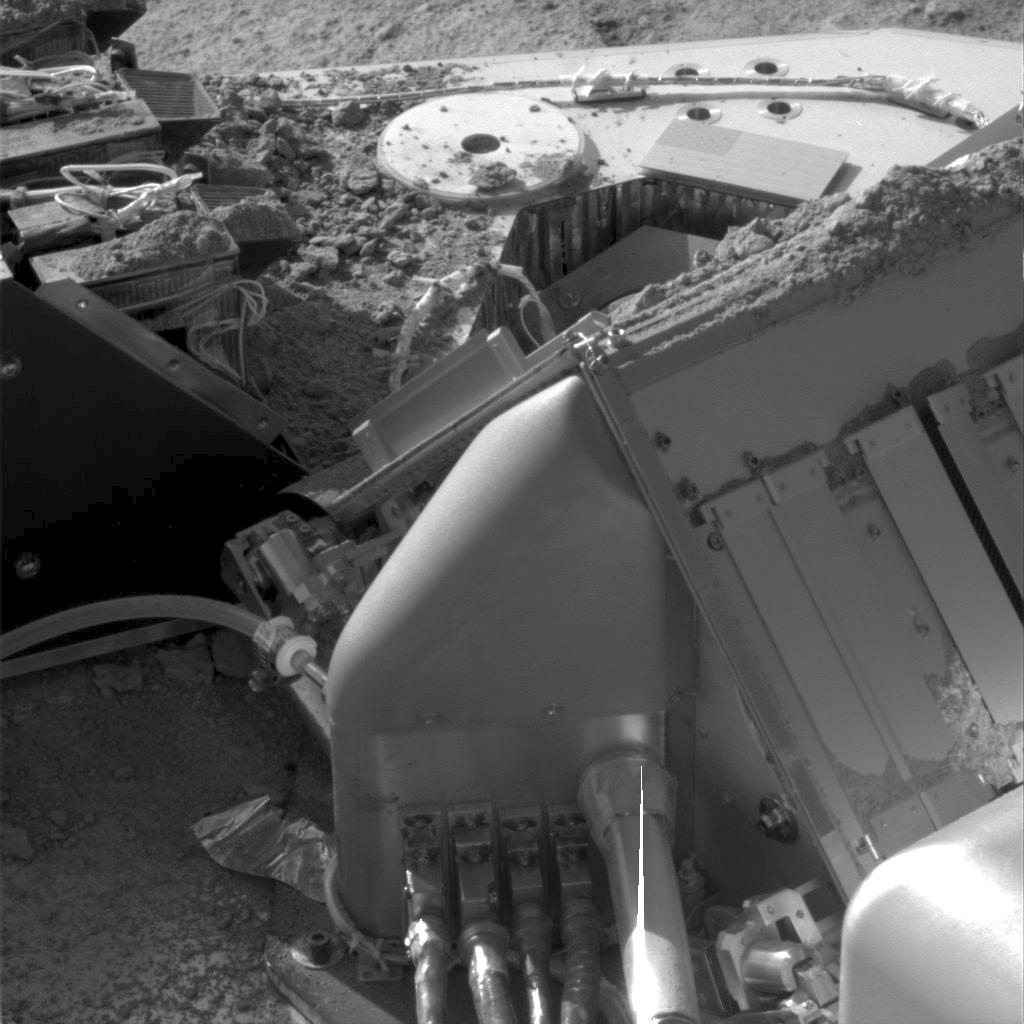 This image, taken by the Surface Stereo Imager of NASA's Phoenix Lander, shows Martian soil piled on top of the spacecraft's deck and some of its instruments. Researchers at the University of Arkansas have used data from the Phoenix Lander to show that salts formed from perchlorates discovered there have the potential to be found in liquid form under the conditions on present-day Mars. Image credit: NASA/JPL-Caltech/University of Arizona/Max Planck Institute

FAYETTEVILLE, Ark. – Researchers at the University of Arkansas have shown that salts formed from perchlorates discovered at the Phoenix landing site have the potential to be found in liquid solution under the temperature and pressure conditions on present-day Mars.

Research professor Vincent F. Chevrier and graduate students Jennifer Hanley and Travis S. Altheide report their findings in the current issue of Geophysical Research Letters. Their work provides the first demonstration of a potential stable liquid on present-day Mars in the immediate environment of the lander.

“Under real, observed Martian conditions, you can have a stable liquid,” said Chevrier.

The researchers studied the properties of sodium and magnesium perchlorates, salts detected by the Phoenix lander, under the temperature, pressure and humidity conditions found at the landing site. The discovery of perchlorates on Mars by the Phoenix mission surprised scientists – the compounds are rare on Earth, found mostly in extremely arid environments such as the Atacama Desert in Chile.

The scientists studied the properties of these salts at varying temperatures using the Andromeda Chamber in the W.M. Keck Laboratory for Space Simulation – a chamber that can imitate the pressure and atmospheric conditions found on Mars. They also performed thermodynamic calculations to determine the state of salt and water combinations on the Martian surface and to see if there was any potential for liquid to be found.

The extreme temperatures found on Mars typically lead to either crystallization or evaporation of water, making it difficult to imagine that water could be found in liquid form. However, salts have been shown to lower the freezing point of water – which is why street crews use salt on the roads to melt ice, Hanley said. Some salts, like perchlorates, lower the freezing point substantially. It turns out that the temperature for the liquid phase of magnesium perchlorate – 206 degrees Kelvin – is a temperature found on Mars at the Phoenix landing site. Based on temperature findings from the Phoenix lander, conditions would allow this perchlorate solution to be present in liquid form for a few hours each day during the summer.

“The window for liquid is very small,” Hanley said. Nevertheless, this finding further supports the possibility of finding life on Mars.

“You don’t necessarily need to have a lot of water to have life,” Chevrier said. “But you need liquid water at some point.”

The Arkansas Center for Space and Planetary Sciences is jointly sponsored by the J. William Fulbright College of Sciences and the College of Engineering.