U of A Team Accepted into Institute on ePortfolios 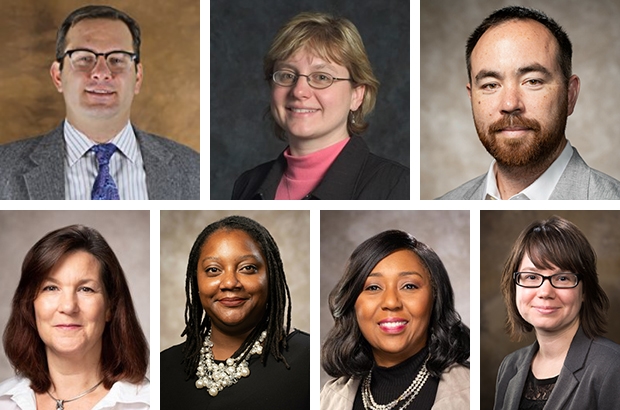 U of A faculty and staff were recently accepted to represent the university in the Association of American Colleges and Universities Institute on ePortfolios, a nationwide, year-long program designed to explore how to best broaden student engagement with ePortfolios.

This strategic approach to ePortfolios has been spearheaded by the Fulbright College of Arts and Sciences Student Success Team, including Lynn Meade, teaching assistant professor in Student Success and communication instructor, who will also teach a course on ePortfolios in the spring.

"Already, we've identified an ePortfolio platform and have been approved to write an open resource textbook about ePortfolios so that every student and teacher has access to the resources they need for success," Meade said. "This ePortfolio institute was the logical next step, and it's a great opportunity for our interdisciplinary team to share ideas with each other and with other campuses nationwide. We're honored to participate."

Meade worked closely with Deb Korth, teaching professor and director of Fulbright College Student Success, to assemble a diverse team of university leaders that would encourage collaboration between academic and student affairs leaders.

"It was important that we identify key leaders who were not only committed to the project, but who also had the largest potential to affect change for Fulbright College and, ultimately, for the university," Korth said.

In addition, Kathryn Zawisza, director of academic technology and innovation, was asked to join the team for her expertise on student and faculty support technology.

"I wanted to get involved with the ePortfolio institute because, as a campus technology leader, it will give me insight into the pedagogical needs and best practices that will need to be considered as we use technology to support the U of A's efforts to institute ePortfolios on our campus, which will support student success and enhance student learning," Zawisa said.

"The ePortfolio institute is important because we will be part of a national think tank aimed at creatively exploring how and why ePortfolios can be beneficial at our institutions for students, programs, departments, college and university," Calabretta Sajder said.

Seawood Williams added that this institute "will allow us to actualize an ambitious strategy to broaden student engagement with ePortfolios."

ePortfolios are part of the university's 11 high-impact student success practices, which are supported by the AAC&U. Learn more about the AAC&U's focus on ePortfolios and the institute.