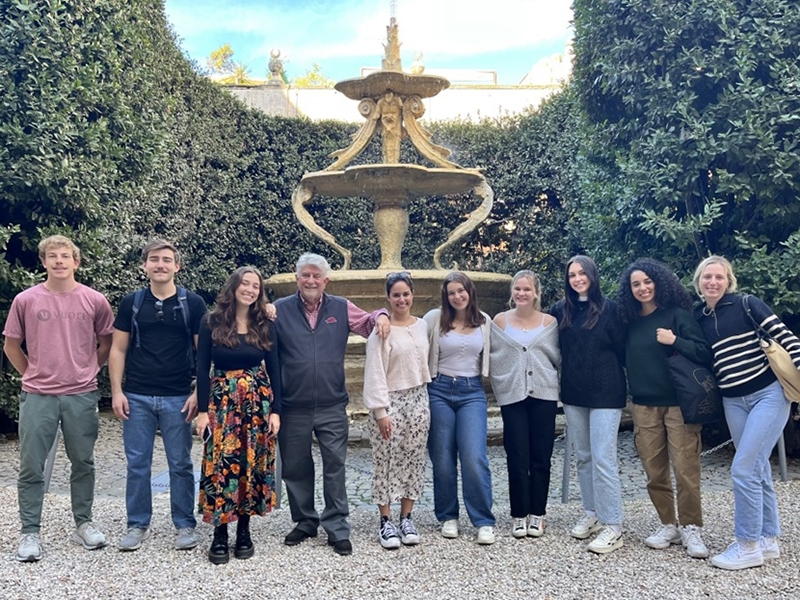 Professor Larry Foley (fourth from left) with students in his multimedia storytelling class at the Palazzo Taverna, home of the university's Rome Center.

In 1895, several hundred Italians from northern Italy emigrated to Lake Village, Arkansas, to toil in the cotton fields — a venture that quickly turned deadly as Italians faced unsafe labor conditions, rampant sickness and lack of expertise. Led by a disgraced and defrocked parish priest, around 40 families ventured out of the Delta into the Ozarks, where they founded the city of Tontitown, which has now become a haven of Italian culture and cuisine in the Northwest Arkansas region.

The epic story of those Italians is the subject of Larry Foley's latest documentary, Cries from the Cottonfields, one he is researching and started with filming on site in Rome, Italy, as part of his work as the inaugural Rome Center Faculty Fellowship, offered through the Graduate School and International Education.

"My story starts at the Tontitown Grape Festival and goes back in time to 1895 and tracks their epic journey back to where we started," Foley said. "I'm talking to historians and authors who are connected through ancestry to these immigrants who came to Arkansas, and researching documents and literature on their story."

Foley, who also taught a class in multimedia storytelling as part of his time in Italy, had been in discussions with Curt Rom, interim dean of the Graduate School and International Education, about traveling to Rome, initially just to teach classes. It wasn't until he saw a presentation about a local author's new book, Italians of Sunnyside, that Foley found an opportunity for a documentary project that merged perfectly with the newly established fellowship.

"It was a bigger story than I ever imagined," he said. "Right after that [presentation], I sent a note to Dr. Rom. The more I talked with him, the more excited they got about this story. We all know about Tontitown. Some of us know Italian descendants from Lake Village. But how many of us knew the entire story?"

That story is a far-reaching tale involving a Roman mayor and a Pope, who blessed the group before they left northern Italy. At its center is Father Pietro Bandini, a priest expelled from the Jesuits who had spent time in the American West. A controversial figure still to this day, Bandini saw the opportunity to help the languishing Italians out of the Delta as a chance to redeem himself.

"One of the best scenes we filmed was at a Catholic Church in Valli del Pasubio," Foley said. "We filmed a Mass at the same location where on All Saints Day 1895, a special service was held to bless the immigrants soon headed to chase the American dream in Arkansas. The priest even allowed us to put a microphone on him."

Arriving in the Ozarks, the Italians endured a brutal first winter that left them barely surviving on abandoned farms eating what little they could find. When spring arrived, families planted vegetable gardens and started grape vineyards that over time grew into a thriving jelly and wine industry, one that still flourishes to this day in the small Northwest Arkansas community.

"I'm tremendously honored. It's been the opportunity of a lifetime," Foley continued. "I've come across some people that I've interviewed and visuals that I would've never had the opportunity to have found if I were still on campus. To have the time and resources, to have boots on the ground here in Rome, to have the ability to travel where these people traveled from, … to have a time to work on a project frankly is rare. And I'm grateful for the opportunity."

The Rome Center Faculty Fellowship, established by Rom, offers faculty the opportunity to conduct research or scholarly work on a project uniquely appropriate to the Rome Center as the U of A education and research hub in Europe. The fellowship provides round-trip airfare and housing for the grant period. Fellows will present on their project during a Rome Center event to be held on campus in the spring semester. The application period for the 2023-24 school year will occur in the Spring 2023 semester.

Historian Elliott West will give a talk about the American West at 6 p.m. Thursday, Feb. 16, at the Pryor Center, located at 1 E. Center St. on the Fayetteville Town Square.

The 2021 Arkansas Capital Scan found that about 90% of seed funding went to white male founders, with roughly 10% going to businesses started by people who were both women and people of color.

Undergraduate Mock Trial Advances to Next Stage of Competition

Teams from the U of A placed first and fifth in the regional at Norman, Oklahoma, with the first-place team securing an automatic bid to the Open Round Championships in March.

Express your experience today as a staff member, faculty member or student at the U of A. This form only takes approximately five to 10 minutes to complete.