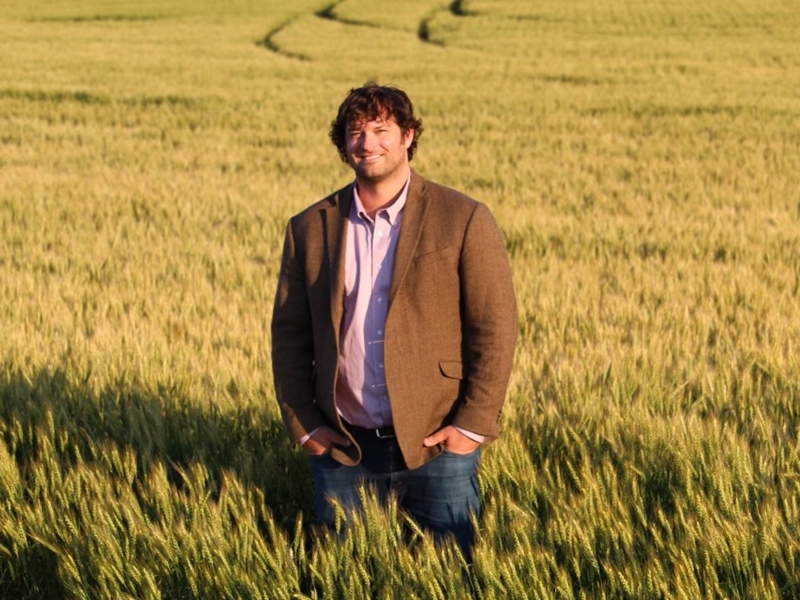 Agricultural economics and agribusiness assistant professor Trey Malone was recently awarded for his work on a Journal of Food Distribution Research article.

Trey Malone, assistant professor in the Agricultural Economics and Agribusiness Department for the Arkansas Agricultural Experiment Station, was recently awarded the 2022 Presidential Award for Excellence in Research and Communication from the Food Distribution Research Society.

He was selected for his work on a Journal of Food Distribution Research article titled "The Changing Role of Fat Perceptions in Fluid Milk Labeling: Would the Dairy Industry Sell More if 2% Milk Was Called 98% Fat Free?" Malone's co-authors and fellow award recipients include Oishi Kazi and Steven Miller from Michigan State University and Christopher Wolf from Cornell University. Malone conducts research for the experiment station, the research arm of the UA System Division of Agriculture, and teaches in the Dale Bumpers College of Agricultural, Food and Life Sciences at the U of A.

"This is certainly a well-deserved award," said John Anderson, head of the Agricultural Economics and Agribusiness Department. "Dr. Malone has an exceptional ability to identify relevant problems, to conceptualize those problems in ways that provide unique insights and to apply appropriate methods to address researchable questions."

Anderson, who is also director of the Fryar Price Risk Management Center of Excellence, said the project Malone was awarded for is an example of how "effective and impactful his approach to research can be."

The milk marketing study explored how perceptions of fat content may have changed over the past few decades. Malone said these changes are particularly relevant for the dairy industry as fluid milk is marketed with several fat content options. The article explored the consequences of how fat is described on the fluid milk label. Their research indicated that consumers would pay less for 2% fat milk if labeled "98% fat-free milk."

"At the end of the day, even though people have different beliefs about milk fat, there is no evidence that changing the label would lead to a positive nudge in consumer willingness to pay," Malone said.

In the research article, Malone and his co-authors note the scientific consensus regarding the link between fat and health risks has changed relative to prior decades. Studies that influenced government recommendations in the 1970s and 80s on dietary fat and cholesterol, for example, were turned on their head by 2015 when dietary guidelines from the U.S. Department of Agriculture and Department of Health and Human Services dropped "fat" as a "nutrient of concern" and imposed no upper limit on total fat consumption but recommended keeping saturated fat intake within less than 10% of total calorie intake. The article pointed to studies that found inconsistent evidence of an association between whole-fat dairy and cardiovascular disease, obesity and diabetes.

Total sales of fluid milk, compared to cheese and butter, have continued a downward trend over the past 50 years, but not all varieties of fluid milk are in decline, the journal article noted. Between 2010 and 2015, trends in whole milk, 2% (reduced fat) milk and skim milk sales seem to have reversed compared to prior years. Skim milk sales peaked in 1998 and have decreased to 1975 levels. Meanwhile, following decades of decline, aggregate whole milk consumption has increased each year since 2013, with 2019 being 17% higher than six years earlier. In 2018, whole milk passed 2% (reduced fat) milk as the largest milkfat category consumed.

"This article was fun to write, as it showcases the importance of cognitive processes for consumer decision-making in the agri-food industry," Malone said.

Malone, a former professor at Michigan State who joined the experiment station in 2022, will teach a food and agricultural marketing undergraduate course at the U of A in the spring of 2023.

"I'm excited to start teaching students in the Dale Bumpers College of Agricultural, Food and Life Sciences. I'd like to think that my approach to food and agricultural marketing is like a behavioral supply chain logistics course."

"We are excited to have him bringing his practical, problem-solving perspective to food marketing into the classroom in the agricultural economics and agribusiness department," Anderson said.

Malone will also teach an agribusiness entrepreneurship course in the spring of 2023.

In addition to preparing grant proposals and advising Ph.D. students, Malone is working on a new tool for business owners called the Food and Agriculture Systems Sentiment Index in collaboration with Brandon McFadden, Tyson Endowed Chair in Food Policy Economics for the experiment station. The index is in review and expected to be available for use by the public early next year. Malone was also recently appointed as a mentor for the Venture Mentor Service with the U of A Office of Entrepreneurship and Innovation.

To learn more about Division of Agriculture research, visit the Arkansas Agricultural Experiment Station website: aaes.uada.edu. Follow on Twitter at @ArkAgResearch. To learn more about the Division of Agriculture, visit uada.edu. Follow us on Twitter at @AgInArk. To learn about extension programs in Arkansas, contact your local Cooperative Extension Service agent or visit www.uaex.uada.edu.