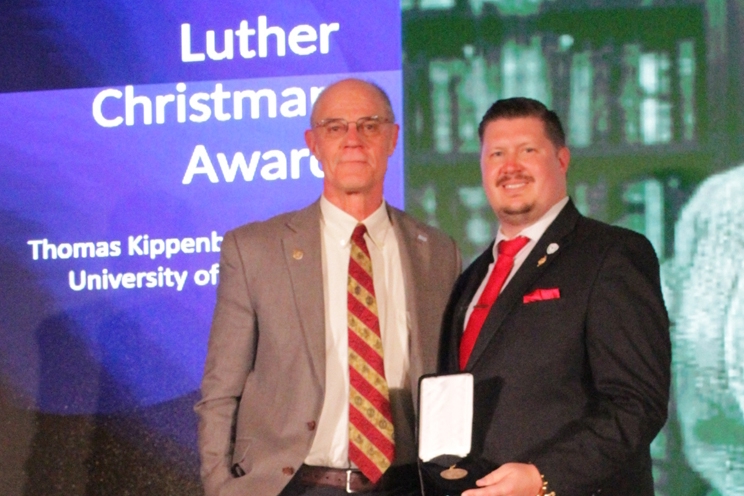 Thomas Kippenbrock, a professor in the Eleanor Mann School of Nursing, recently received the American Association of Men in Nursing's Luther Christman Award for his service to the organization and distinguished career in nursing.

This award is the highest accolade bestowed upon a member or leader in the organization. It's named for the late Luther Christman for his contributions to the nursing profession and his role in co-founding the association.

"Dr. Kippenbock's award is timely, as we recently formed an AAMN Chapter at the University of Arkansas," said Jessie Casida, executive director of the U of A nursing school.

One of the association's goals is to encourage men of all ages to become nurses and join all nurses in strengthening and humanizing health care. Casida said the number of male nurses in Arkansas is below the national average. "We are committed to diversifying the field through our college's 'WE CARE' and diversity, equity and inclusion initiatives," he said.

Kippenbrock's research and publication contributions have routinely focused on men's health, men in the nursing profession, and advanced practice nurses in rural areas, particularly in the Mississippi Delta and southern states. His scholarly publications also include examinations of professional issues and practices, such as hospitalized patient falls, student attrition, and nursing administrator turnover.

Kippenbrock was head of the U of A nursing school from 2003 to 2008. Before working in academia, he served as a surgical and medical ICU staff/charge nurse and a clinical research nurse coordinator at university and public hospitals in Indiana.

Kippenbrock received his master's in nursing and his doctorate in higher education administration from Indiana University, where he went on to serve as assistant chair of nursing administration and teacher education. He also served as associate dean and interim director of the University of San Francisco School of Nursing and as assistant dean of the University of Nebraska Medical Center College of Nursing. He was also chair of the nursing department in the Arkansas State University College of Nursing and Health Professions, where he launched the first nurse anesthetist program in the state.